Yesterday, May 3rd, the day before a High Court judge was due to rule on the long-running case brought by Selvi Bala, the editor of Sarawak Report received yet another unsolicited phone call from the remaining defendant, Deepak Jaikashan, who is accused of complicity in blackmail and cover-up over the Altantuya murder.

It was noted that the line on which Deepak called was one he had earlier warned is being tapped by special forces working for Prime Minister Najib, whom he had described in an earlier defence statement as being, together with his wife, the “Mastermind and main beneficiary” of the blackmail and cover-up operation he stands accused of taking part in.

Once again Deepak volunteered to Sarawak Report during that call that he planned to turn up in court and tell the truth about the cover-up over the murder of Altantuya.

Once again he complained he was being blackmailed by Najib, but stated that if he spoke out his evidence would ‘affect the outcome of the election’.

Yet, in the event today, Deepak once again pulled out of his commitment an hour before the court hearing and failed to appear before the judge, along with Najib’s lawyer Shafee Abdullah, who also snubbed the judge.

For months Deepak has blown one way and then another on this matter, apparently seeking to use Sarawak Report as an intermediary in his struggle with Najib’s people, including Shafee Abdullah, who is seeking to prevent him admitting Selvi’s accusations.

Presumably calculating that he was being listened to, Deepak explained to Sarawak Report during this unanticipated call that after weeks of avoiding court he intended to turn up for the 3pm Friday hearing, at which the judge had said she would deliver a judgement on Selvi’s case.  He would speak the full truth at last he said:

“You have to understand, I am caught in the middle of all this” he complained to Sarawak Report.

We did understand.  In several communications over many months Deepak has made clear that he would like to tell the truth, which he has said several times is that he was indeed part of a conspiracy to force a key witness in the murder case of Najib’s beautiful young translator and alleged mistress to withdraw his evidence.

From Murder To Cover-Up To Blackmail

That witness, the private detective PI Bala, had claimed Altantuya had been the then Defence Minister Najib’s lover and was pregnant and was blackmailing him (together with her subsequent lover, Najib’s proxy on the Scorpene submarine deal, Razak Baginda) over a serious corruption matter.

Millions had been stolen in backhanders from the Scorpene purchase (a bribe to Najib, say French prosecutors in an ongoing court case) and Altantuya, who had acted as a ‘translator’ on those trips to Paris, was demanding cash to buy her silence, given she had a baby coming.

PI Bala had been hired by Razak Baginda to manage the threats from Altantuya and he claimed he had learned about Najib’s involvement in the affair from Baginda himself and from Altantuya before the fatful evening, when he was present as Najib’s bodyguards arrived to pull Altantuya off the street from outside Baginda’s house.

He watched them push her into a car, after which they drove her to a remote area, shot her dead and then blew her into tiny pieces, using weapons grade explosive available only from the Ministry of Defence.

The bodyguards, who said they did not know Altantuya and were acting under orders and the incentive of a bribe, were convicted. However, no one else associated with these events was brought to trial. PI Bala on the day of the sentencing declared that enough was enough and he gave his evidence in a public declaration that made several references to Najib, including the then Defence Minister’s sexual relationship with Altantuya. 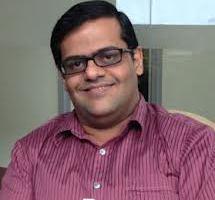 Deepak was the name on Rosmah’s land deals, he says. Which has enabled Najib to blackmail him over RM19 million in taxes!

It is at this point that the matter which is now before the courts took place.

Rosmah rang Deepak and Deepak reached out to Bala (who is from his own community) and within a few hours Deepak, two of Najib’s brothers and a bunch of lawyers had cornered PI Bala in a hotel, where he was told his family would be in danger if he did not take their offer of money, remove Najib’s name from his statement and leave the country.

Bala gave in and fled to India with his family for several years. Then, as many Malaysians know, he returned just before GE13 to explain what had happened – and to retract his altered statement in favour of his original one implicating Najib. Not long after PI Bala died from  a heart attack following a hospital check-up.

Deepak has on several occasions admitted that Bala was telling the truth about the blackmail against him, for which his widow Selvi is now demanding compensation.  However, he has also admitted to Sarawak Report on numerous occasions that Najib has been also blackmailing him to withdraw his evidence and lie.

This is because Deepak acknowledges he had acted for Rosmah as a proxy on several business arrangements, including major land deals, hence his former close relationship.

Whether these land deals involved the same controversial former military properties that were sold off by Najib’s Ministry of Defence to a mysterious private buyer at a super-cheap prices without tendering, Deepak has not confirmed to Sarawak Report.

However, what he has admitted on numerous occasions is that RM19 million has been identified in unpaid taxes from the profits from these land deals, which Rosmah as the beneficiary ought to pay.  But, since it is Deepak’s name that is on the deals, Najib and his representatives, which include the MP and Tabung Haji boss Abdul Azeez and Najib’s lawyer Shafee Abdullah, have apparently threatened Deepak that unless he agrees to lie in court, they will make sure the tax demand is enforced against him personally.

It is for this reason, Deepak has told Sarawak Report that he withdrew a defence statement made last year, in which he admitted all Selvi’s claims of assisting in the blackmail orchestrated by Najib and Rosmah.  Nevertheless he sent Sarawak Report and his lawyers a copy of that statement, which is now before the court. 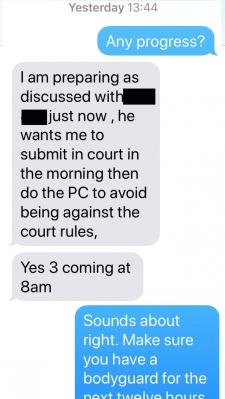 Then in February he again contacted Sarawak Report to say that since he had not been let off his taxes as promised in return, he was again willing to tell the truth to the court.

But, then yet again, in April he reneged once more on the promise, as it became clear that Shafee, who claimed to be representing him, had once again put him in touch with Najib’s intermediaries, who offered to drop the tax demand.

This is what Deepak means about being “caught in the middle” and why every time he calls Sarawak Report and threatens to tell all on a phone that he knows is being tapped, a new attempt is made to buy him off with renewed promises about those taxes.

Last night Deepak texted Sarawak Report several times, saying that he had hired bodyguards to keep him safe and that he would be going to give his testimony in court.  Today, he confirmed he was on his way for the afternoon hearing. 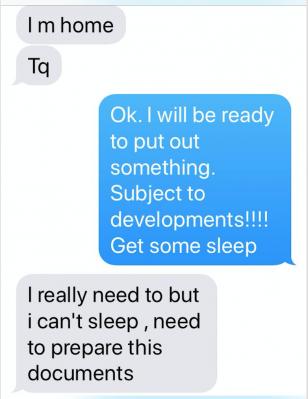 Deepak last night to SR, whom he had asked to standby to cover his announcement. But, was this all really a message for Najib’s evesdropping surveillance team to solve his problems or else?

However, for at least the third time he has again failed to carry out his promise and both he and lawyer Shafee Abdullah failed to turn up in court.

For Shafee, the outcome could be notched up as another ‘triumph’. He applied for an adjournment and the judge agreed to postpone the case till after the all important election (May 25th).

On May 25th, if Najib grasps the election, which he intends to do by fair means or foul, he will no longer fear this evidence of his involvement in the murder and cover-up of a beautiful young woman, who had outlasted her usefulness and threatened to ‘spill the beans’ about Scorpene back in 2006.

His position will be consolidated and he will move swiftly against all who have challenged his right to pillage and abuse the system.

Chances are, Deepak’s taxes will never be settled in such circumstances.  Why should Najib keep the promise that has proved his main weapon in shutting this witness up?