Hadi's Lawyers Accept Nik Abduh Recording Is Genuine After All

Lawyers, acting for PAS president Hadi Awang in a legal case being waged in London against Sarawak Report, have now conceded that a controversial recording said to be of a senior PAS MP, Nik Abduh, is genuine.

Speaking in court yesterday barrister Jacob Dean confirmed that Hadi will not contest the authenticity of the recording, removing the need for expert forensic evidence to identify the speaker. Hadi’s lawyers further indicated that Nik Abduh and possibly others present at the time of the recording (thought to include Hadi’s son-in-law, Zaharuddin Muhammad), would be among the witnesses his client plans to call to give evidence at trial:

As a result of the indication about the number of witnesses which both parties intend to call, the Judge ordered that the trial, due to start on 1 April 2019, should be listed for 11 days.

We anticipate 8 or 9 witnesses [for] issues raised by the truth defence. There are allegations that owners of a religious school received funds. Allegations that the claimant’s political secretary, who was running the election campaign, knew of relevant payments. Then [that] the claimant’s close associate, Dr Marzuki, finally admitted that PAS had received a payment….

It seems likely he [Dr Marzuki] needs to give evidence. [Also the] Treasurer of PAS. Also 3 trustees of an account that is said to have received corrupt funds, at least one possibly two of those [trustees]. That takes you to six. Then there is the man on the tape, Nik Abduh. That’s our preliminary estimate for witnesses on what is pleaded….. [Jacob Dean, barrister for Hadi Awang]

Dean informed the judge that Hadi intends to fly the above people from KL to support his case in London, in order to contest those allegations in the Sarawak Report’s Defence.

The decision to concede that the voice on the recording was indeed Nik Abduh, stood in marked contrast to previous public denials made by Nik Abduh himself and also appears to conflict with statements made by PAS before the General Election.

The controversial statements on the recording itself included the following translated remarks:

Among the reasons why we succeeded was with UMNO’s help. UMNO helped us to achieve victory. In 10-11 of these activities. That is us being smart. Umno is stupid. Why do people keep asking us about UMNO’s money? This issue is now over. Tok Guru Nik Aziz took a considerable amount of UMNO’s money. Not a problem? Tok Guru Harun Din, not a problem. This meeting today not a problem.

…. I have met Tok Guru Haji Hadi. Tok Guru Haji Hadi said lucky you taking UMNO’s money. Just do whatever we want. But do not use the money for our private matters. For our personal gain. Instead, use it for Islamic purposes. That’s why we have good relations with UMNO today… why Najib can even accept RUU amendments [Translated]

“The claim that it is me speaking in the conversation is all nonsense and slanderous.

“PAS is a party that doesn’t get involved in matters that are prohibited by Islam, including taking bribes from Umno and following DAP around.”  [translation by Malaysian Insight] 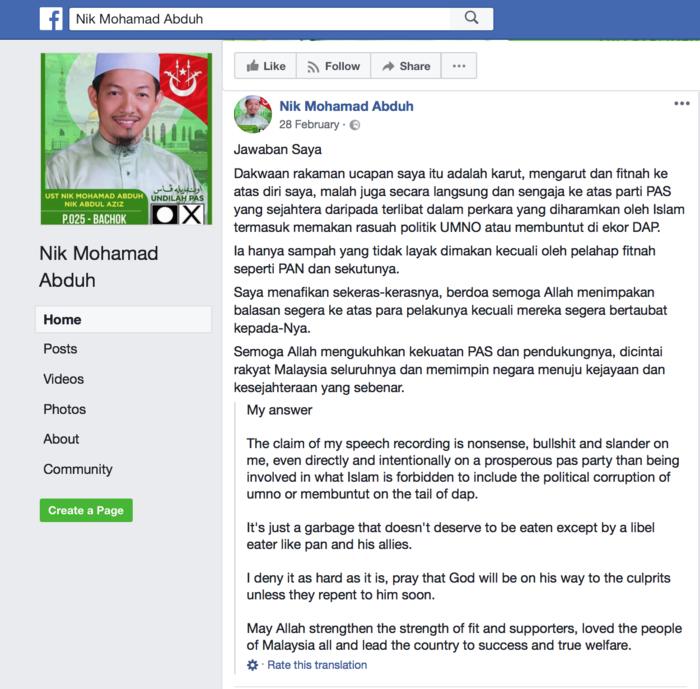 Later he made statements publicly reported in the press as claiming that the recording was a “fake” and an election ploy created by his political enemies, again describing it as ‘defamation’.

“They want to tell voters that PAS is with Umno. That is why the recording was created.” [Free Malaysia Today]

On April 5th he issued other denials, including on Twitter, but confirmed he would not make an official complaint: 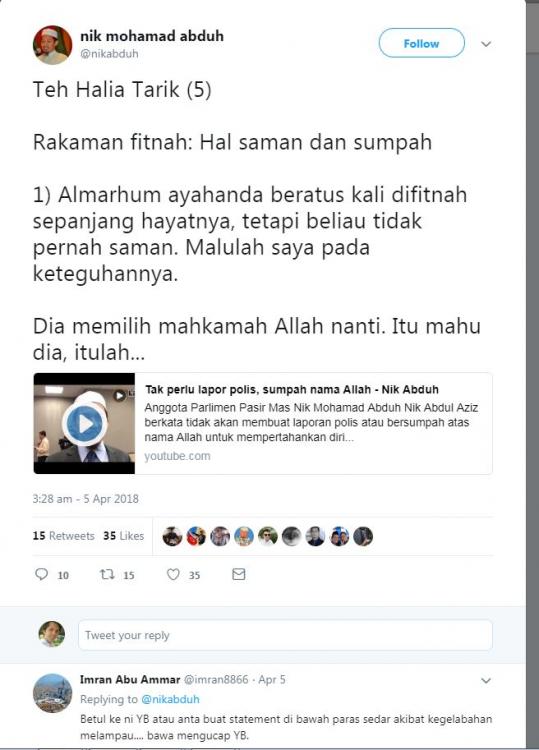 Likewise, PAS secretary general, Takiyuddin Hassan rejected demands for a prompt  investigation by the party into the matter saying again that it was being ‘concocted by PAS’ enemies.’

“This is a trivial matter… we will still look into it but at our pace and we will not be pressured to do so by Amanah leader Husam Musa.”

Takiyuddin said Husam must also produce proof of where the audio was recorded and who recorded it, and above all prove that it contained the voice of Nik Abduh, who is the former PAS Youth chief.  [Berita Daily]

Explaining the apparent volte face, Hadi’s legal team has intimated that its position is that the wording on the recording has been misinterpreted and his position on the correct interpretation of recording will be set out in his reply to the defence due to be lodged at the High Court on 31 July 2018.
Hadi’s legal team’s position on the meaning of the recording is due to be fully explored in the London High Court where the trial is fixed to begin on 1 April next year.
During the hearing, which was called to decide on the costs that can be claimed by either side against the other in the event of winning the case, the judge ruled that Hadi’s lawyers estimated future charges of £857,532 (RM4.5 million) must be cut by half, in terms of what they would be allowed to claim from Sarawak Report, were the PAS leader to succeed in his claim. A share in this reduction in recoverable costs arose from Hadi’s admission that the recording was of Nik Abduh as well as the decision to limit the trial to 11 days.
Sarawak Report’s legal team had placed an estimate of £237,199 (RM1.2million) for their further expenses in defending the case, which was accepted by Hadi’s lawyers.