A statement released on Friday by the Department of Justice (DOJ) marking the opening of a brand new case related to 1MDB has opened an astonishing new twist to the 1MDB saga, revealing that one of the department’s own officials has admitted to having been bribed by ‘the prime architect of 1MDB’ to influence decisions at the DOJ itself and to deceive banks.

The former DOJ employee, George Higginbotham, a senior congressional affairs specialist who worked there as late as August, has admitted to attempting to assist the funding of a multi-million dollar lobbying campaign orchestrated by this “prime architect of 1MDB’ to influence the civil and criminal cases involving the fund.

The Justice Department has also filed a suit to recover more than $73 million in US bank accounts that Higginbotham helped open for Jho Low using the US singer Pras Michael as a front. Pras Michael, has already been identified as a close friend of Jho Low’s, involved in previous schemes linked to 1MDB.

“in 2017 Higginbotham helped facilitate the transfer of tens of millions of dollars from foreign bank accounts to accounts in the United States to finance a lobbying campaign to resolve civil and criminal matters related to the Department of Justice’s investigation of the embezzlement and bribery scheme concerning 1Malaysia Development Berhad (1MDB).  Higginbotham admitted that the foreign principal behind the lobbying campaign was alleged to be the primary architect of the 1MDB scheme.” [US Dept Justice Statement]

What the statement (see below in full) reveals is that this particular scheme to get conspirators off the hook over 1MDB took place as late as 2017, meaning during the run-up to Malaysia’s May election.

Sarawak Report earlier reported on revelations that a key Trump fundraiser, Elliot Broidy and his wife, lawyer Robin Broidy, had been hired in conjuction with the former Trump campaign official Rick Gates to assist Najib and Jho Low.  Gates has now pleaded guilty to charges related to the Trump Russia case in the United States.

The original papers relating to the Broidy connection were passed to Sarawak Report by the organisation that calls itself Global Leaks, which is believed to be linked to a Quatar initiative designed to expose the activities of certain countries currently aligned against it in the Middle East.

Attempt to Snatch Back a Whistleblower?

It seems clear the case involving George Higginbotham is connected to the Broidys and one sinister aspect to the case is that part of the stated purpose of the lobbying was to “secure the removal of a foreign national” residing in the United States on a temporary visa and have him ” sent back to his country of origin”.

The conclusion would seem to be that Najib was trying to get his hands on a key witness or whistleblower who had sought refuge in the US, in order to get them back to Malaysia. 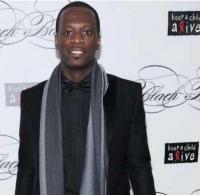 The 23 page court filing on the case provides astonishing details about the alleged multi-million dollar conspiracy, including the freezing of $73 million which the DOJ says was money laundered by the defendants.

Controlling the bank accounts allegedly being used to fund the lobbying operation was none other than the rap star Pras Michael, who was earlier identified in the Global Leaks material as the individual being used by Jho Low to pay lawyer Robin Broidy. 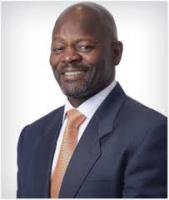 Sarawak Report, in a series of investigations dating back to 2015, identified White (who as a key Obama fundraiser occupied a similar position to Elliot Broidy under Trump) as the recipient of several million dollars from 1MDB, both through a solar power plant intiative (which collapsed) and later as the designated manager of an apparent joint investment fund named Yurus set up together with the Abu Dhabi fund Aabar and worth half a billion dollars.

White’s company DuSable, in which Pras Michael was a partner, appears to have made $69 million in fees before the Yurus fund was wrapped up shortly after its existence and connection to Frank White was thus exposed. Sarawak Report further established that DuSable paid thousands of dollars towards a number of key democrat campaigns whilst working together with 1MDB.

It would appear that the attempt to engage with Trump’s campaign manager Elliot Broidy, again using Pras Michael as the money manager, represented a similar strategy to influence decision making:

JHO LOW’s money was funneled through various U.S. bank accounts set up by, and under the control of, an entertainer and businessman named Prakazrel “Pras” MICHEL. With the assistance of George HIGGINBOTHAM, MICHEL opened multiple accounts at financial institutions in the United States to maintain money funneled into the United States at JHO LOW’s direction; however, the true source and purpose of the funds were not disclosed to the banks and were actively concealed from them. MICHEL then disbursed JHO LOW’s funds to various individuals and entities to facilitate a lobbying campaign to represent the interests of various foreign nationals and entities, including JHO LOW, in the United States [US Court filing against George Higginbotham]

The court deposition also gives the most up to date firm information yet available as to where Jho Low was hiding a year before the May election in plain sight in Bangkok.

It states that Pras Michael went to meet with the fugitive together with two ‘individuals’, who had been hired to assist. One described as ‘Individual 1′ is a ‘businessman’, who fits the description of Rick Gates (given the contents of emails already published by Sarawak Report).  The other named ‘Individual 2′ who fits the description of Elliot Broidy, whose lawyer wife is also described as engaging with Jho Low,

The couple agreed to accept millions, but only through Pras Michael, who agreed to set up a company (Artemis) to funnel cash from Jho Low to pay for the legal and lobbying services.

The trio were booked by Jho Low himself “in early May” 2017 into the top hotel chain, the Shangri-La in Bangkok, where it would appear Jho Low was himself hiding in plain sight, despite the arrest warrant from nearby Singapore.

The Shangri-La was founded by Malaysia’s richest man Robert Kuok, who may be embarrassed by the revelation that the country’s famous fugitive Jho Low appears to have been a star guest at his 6 star hotel without the Malaysian owners apparently noticing.

Jho Low was hiding in the respectable 6* Shangri-La Hotel?

The indictment continues to detail how the team of US lobbyists assured Jho they could successfully work to frustrate the Dept of Justice’s cases against him, supporting rumours that the State Department had warned that if Najib lost power there could be violence in Malaysia.

They were paid through Jho Low’s Hong Kong bank account at the Industrial and Commercial Bank of China:

According to the court filing the lawyer wife of Individual 2 used her sister and parents to receive the money channelled from Jho Low via Pras Michael.

US Official 1 (aka President of the United States)

The court filing continues to describe a series of emails detailing how the team of influence peddlars funded by Jho Low next sprang into action to attempt to influence President Trump during the surprise meeting organised with Najib in the fall of 2017. In August the lobbyists were plotting talking points to encourage “US Official 1″ (i.e. President Trump) to drop the investigation as being damaging to relations with the Malaysian people, when in fact the advice was being paid for by Jho Low to get his boss off the hook: 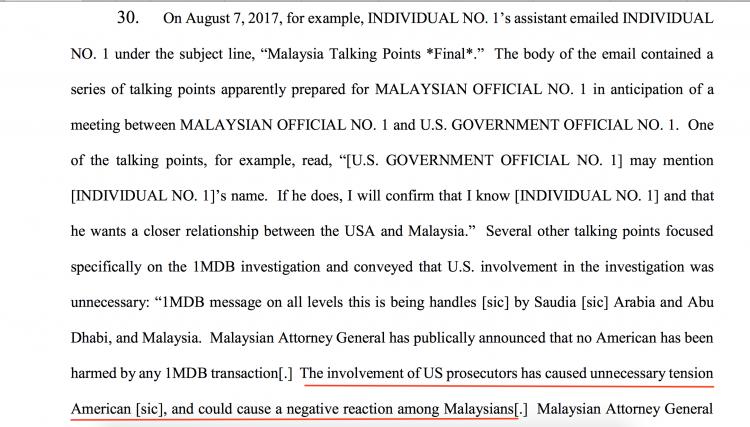 Pressure on Trump to shelve the 1MDB investigation

Later the indictment details how at a follow up meeting in Macau Jho Low, who was plainly still travelling freely, met up with Pras Michael again and with George Higginbotham, who then attempted to assist in the massive transfers of cash to pay for the lobbying efforts by lying to banks such as JP Morgan about the purpose of the cash transfers from Jho Low’s Hong Kong and Chinese bank accounts.

Higginbotham had no direct involvement in the 1MDB case, despite working at the Dept of Justice.

*amended from earlier error which cited May 2018

A former employee with the U.S. Department of Justice pleaded guilty today for his role in a conspiracy to deceive banks in the United States about the source and purpose of millions of dollars sent from overseas to finance a lobbying campaign on behalf of foreign interests, announced Assistant Attorney General Brian A. Benczkowski of the Justice Department’s Criminal Division.

George Higginbotham, 46, of Washington, D.C., who was employed at the Justice Department as a Senior Congressional Affairs Specialist from July 2016 to August 2018, pleaded guilty to one count of conspiracy to make false statements to a bank before U.S. District Judge Colleen Kollar-Kotelly of the District of Columbia.

According to admissions made in connection with his plea, in 2017 Higginbotham helped facilitate the transfer of tens of millions of dollars from foreign bank accounts to accounts in the United States to finance a lobbying campaign to resolve civil and criminal matters related to the Department of Justice’s investigation of the embezzlement and bribery scheme concerning 1Malaysia Development Berhad (1MDB).  Higginbotham admitted that the foreign principal behind the lobbying campaign was alleged to be the primary architect of the 1MDB scheme.  Higginbotham, as a Justice Department employee, played no role in any aspect of the investigation and failed to influence any aspect of the Department’s investigation of 1MDB.  Higginbotham further admitted that another purpose of the lobbying campaign was an attempt to persuade high-level U.S. government officials to have a separate foreign national, who was residing in the United States on a temporary visa at the time, removed from the United States and sent back to his country of origin.

In order to conceal the identity of the foreign principal behind the lobbying campaign, Higginbotham admitted to conspiring to make false statements to financial institutions in the United States concerning the source and purpose of the funds.  Higginbotham also admitted to working on various fake loan and consulting documents in order to deceive banks and other regulators about the true source and purpose of the money.

The Department of Justice Office of the Inspector General and the FBI are investigating the case.  Deputy Chief John Keller and Trial Attorneys Ryan Ellersick, James Mann, Sean Mulryne, and Nicole Lockhart of the Criminal Division’s Public Integrity Section, and Deputy Chief Woo Lee and Trial Attorney Joshua Sohn of the Criminal Division’s Money Laundering and Asset Recovery Section are prosecuting the case.