When an out of court settlement was signed on January 24th agreeing that Sarawak Report’s legal bills should be paid to the tune of RM1.4 million (RM1,422,980.00) as part of the arrangement to allow Hadi Awang to withdraw from his case, Sarawak Report agreed to Hadi’s condition that both parties keep the payment confidential.

It is a common provision of such settlements that the out of court payments are kept confidential to spare the blushes of the party who paid, in return for saving both parties the further time and expense of futher litigation.

However, Sarawak Report only agreed to the UK court order to drop Hadi’s case on condition its costs were paid. In the event, the settlement payment was placed in escrow with Sarawak Report’s Malaysian lawyer to be released to Sarawak Report the moment that the court order withdrawing Hadi’s English case was stamped and sealed.

That court order withdrawing the proceedings therefore provided for ‘no order as to costs’, as Hadi’s contribution had already been paid and was in escrow. 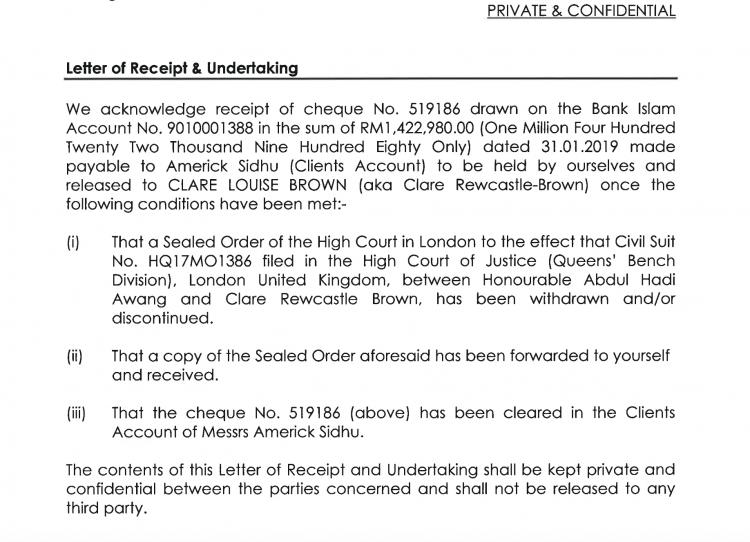 The terms of the out of court agreement made at the time that the cheque of RM14.m was placed in escrow with Sarawak Report’s solicitor

Hadi and his colleagues in PAS were clearly willing to pay the money in order to be spared  cross-examination on their conflicting testimony and furthermore to avoid the very likely danger of publicly losing the case and being forced to pay costs.  If they continued to contradict each other in front of an English Court someone would have committed perjury for lying in a London law suit (‘sharia compliant’ lying is not recognised in the UK civil court any more than in most Muslim countries).

The out of court agreement did not oblige Sarawak Report to provide any of the remedies sought in Hadi’s claim, such as keeping silent on the subject of UMNO payments to PAS or anything else, since Sarawak Report had refused to apologise for its remarks or to surrender its commitment to fair reporting in the public interest.

Sarawak Report did agree to withdraw its own counter suit against Hadi for harassment so as to bring all legal action to an end. 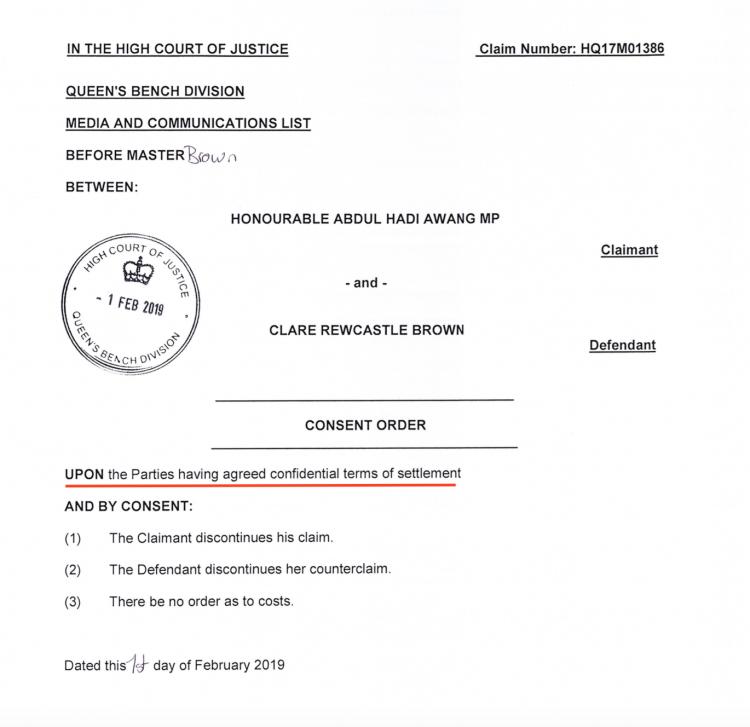 The eventual court order was super-short, making reference to the CONFIDENTIAL terms of settlement between the parties

Sarawak Report had filed its counter-complaint owing to persistant harassment relating to the case emanating from pro-UMNO bloggers such as the defamation outfit Malaysia Today, which we argued that Hadi was aiding and abetting by leaking court documents to the publication.

After all, Malaysia Today’s writer is Raja Petra Kamaruddin (‘RPK’), who was cited as Hadi’s witness in the case and is brother to Raja Idris Kamaruddin, who was acting as Hadi’s agent in the proceedings, allegedly interfacing with PAS’s London lawyers Carter Ruck.

Sarawak Report had complained that private and confidential information about the case was being leaked to RPK, which he was then twisting and abusing to attack Sarawak Report in a persistant, threatening and defamatory manner – whilst additionally lying about alleged multi-million dollar payments from various fictitious parties to Sarawak Report.

However, with Hadi’s case dropped, there was little interest in continuing further costly legal action relating to the misuse of court documents in the proceeding.

What Sarawak Report rightly assumed was that Malaysian commentators would swiftly see the settlement for what it was: a total climb down by Hadi from his claim against Sarawak Report over its reporting on alleged UMNO payments to PAS – there seemed no need to spell out the payment of legal fees.

A Commitment Works Both Ways

Ever since the closing of the case, however, PAS has sought to spin and deceive over the matter. In the process senior PAS officials have referred to lying in the political interests of the party as permissible under a surprising interpretation of Sharia law.

It has been implied that Sarawak Report backed out of the case, lied and said things it never claimed (for example that money paid into PAS party accounts came from 1MDB, when 1MDB money dried up in Februay 2015 after the scandal broke).

Now Hadi’s representatives in PAS have repeatedly broken the obligation imposed on Hadi to keep confidentiality about the terms of the settlement, by not only speaking about those terms but also misleading Malaysians by stating that no payment was made to Sarawak Report in settlement of the claim. It was.

Firstly, on Tuesday PAS secretary general Takiyuddin Hassan went public to deny a query from PKR president Anwar Ibrahim, who asked if it was true that PAS had paid Sarawak Reports legal fees as part of the settlement. Instead of fulfilling the commitment not to comment, he claimed that neither Hadi nor the party had paid any costs:

“In other words, the claimant Hadi does not make any payment of costs to the defendant to settle the case out of court.
“It should also be clarified that PAS does not make any payment for any part of this case, because PAS was not a party to the suit.
“PAS considers the PKR president’s statement a desperate move to divert the people’s attention from a crisis of confidence amongst Pakatan Harapan parties towards their chairperson Dr Mahathir Mohamad, who is also the prime minister,” [Malaysiakini]

Then on Thursday, following a further claim by Anwar that he had obtained bank documentation showing Sarawak Report was indeed paid, Takiyuddin announced that he would call a press conference at which he alleges he will provide ‘documents’ to ‘prove’ that Sarawak Report received no payment in order to settle the case:

PAS secretary-general Takiyuddin Hassan (above) said the party will be holding a press conference on this soon. “We will show everything. He (Anwar) said he checked with the London courts. We have all the documents and we will reveal everything.
“We are confident documents are stronger than mere words. We will answer based on the documents,” Takiyuddin told reporters at the MACC headquarters in Putrajaya today.
“I will show (that we didn’t pay RM1.4 million), based on documents. Not like him (Anwar), he is only speaking based on hearsay,” he added. [Malaysiakini].

It means that Takiyuddin, who is the top spokesman in the party and another of Hadi’s representatives in the litigation, has specifically referred to the details of the confidential terms in breach of the settlementagreement, but in a misleading way to imply he can prove that Sarawak Report was not paid, when in fact Sarawak Report received over RM1.4 million towards its legal fees.

Hadi should not have been discussing details of the settlement payment with a member of PAS at all. Takiyuddin’s representations on Hadi’s behalf is a flagrant and repudiatory breach of the confidentiality agreement, which is particularly egregious as it is untrue. 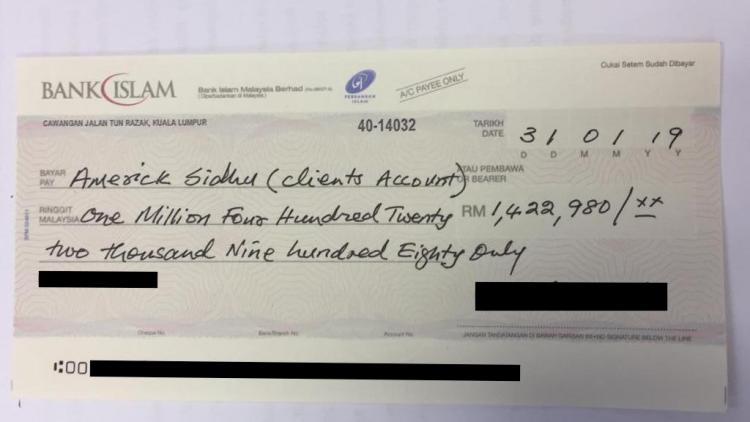 Sarawak Report therefore is entitled to consider itself released from confidentiality also, in order to be able to tell the truth to the Malaysian people who are being misled. There are no documents ‘proving Sarawak Report was not paid’, to the contrary there is copious evidence showing we were paid by agents of Hadi Awang to allow him to withdraw his claim.

We believe for political reasons the PAS general secretary is now attempting to delay his vaunted press conference to show this ‘proof’ until after a coming by election, again in order to deceive voters and the public that he will be able to bring such evidence when he cannot.

On the other hand, we are informed that this letter to Malayan Banking Berhad (below) was the document obtained by Anwar and it shows that Sarawak Report was forced under money laundering rules to explain the export of the equivalent of £260,ooo pounds sterling (RM1.422, 980.00) from Malaysia back to London. Attached to this letter was a copy of the confidential settlement and the court order. 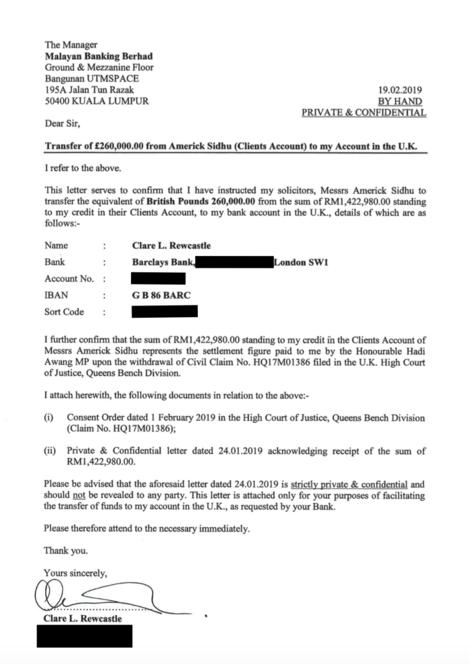 The Truth Of What Happened

Sarawak Report can confirm that towards the end of last year it was approached with an offer for an out of court settlement by PAS through an intermediary, who is a known supporter of the party and who took part in the original decision to sue this site.

There were extensive negotiations with the intermediary, of which Sarawak Report has a record, which were relayed to Hadi and his agents in PAS who were involved in the case (London solicitors Carter Ruck have confirmed they were initially engaged both by Hadi and by PAS over this case).

Eventually, Hadi and his advisors in PAS agreed with Sarawak Report on terms that included this payment, at which point the intermediary, a lawyer and another PAS supporter visited SR’s KL lawyer on January 24th to finalise the terms.

The intermediaries indicated that the party wished to pay the sum in cash the following week. However, Sarawak Report’s lawyer refused a cash payment and accepted instead a post-dated cheque for January 31st from one of the intermediaries (who wanted time to recoup the money from PAS, which has been funding Hadi’s case).

PAS and Hadi Awang plainly wish to find every way to distance themselves from the fact they paid to gain a discontinuance of the case and avoid trial. However, the recent public statements are once again misleading Malaysians into an understanding that Sarawak Report was not paid and itself backed down from defending its position, which is untrue.

In the process they have broken the terms of an agreement they themselves imposed not to discuss the terms of the settlement, and therefore Sarawak Report is entitled to reveal the truth to the Malaysian public and hopes this will draw a line under the affair.

After all, Hadi has got out of the case that threatened to make a fool of him and his party in London and should be grateful for that.