As evening drew in at 5.30pm on Monday some 400 men, women and children found themselves hurrying for their lives as two of five blocks in the kampung of Uma Bawang suddenly became engulfed in flames.

A call was put into the nearest Fire & Rescue ‘Bomba’ station at 5.45 pm, which is in Bintulu, says Stephen Kuleh, a Bintulu based PKR activist who went up to help relatives and friends in the village the following day.

However, it he says it was not till 10pm that a single fire truck made it to the remote area in Belaga, by which time one of the longhouses was razed to the ground, another was half destroyed and a church building had likewise been destroyed. 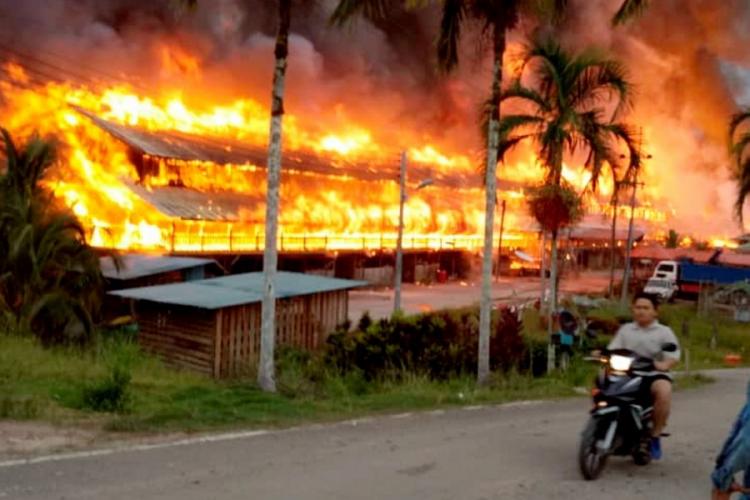 The fire department tells a somewhat less damning story about the response time.  According to an interview given to Bernama, residents for some reason did not ring Bintulu for help until 6.30 pm and it took them “about two hours” to get an 11-man team over to the scene.

Either way, this settlement is far too distant to the nearest fire station, especially given the rotten infrastructure of the region “these trucks simply cannot travel fast on those bad roads” observes Stephen Kuleh.

Left in a fire trap

However, our investigations have revealed the situation of neglect is far, far worse than even this callous under-provision might suggest.

After all, the residents of Sungai Asap were all forced into this ‘modern re-settlement’ by the construction of the multi-billion dollar Bakun Dam, which saw the stripping of a vast area of its valuable timber before these folk were driven from their native customary lands by the rising waters.

The Chinese built dam (about which Sarawak Report has raised various safety and construction issues) was touted as driving modernisation and wealth in the state and to make these displaced folk far better off.  Yet there have been constant concerns about lack of the most basic medical provision in Sungai Asap, low standards of living and now this issue about fire.

There have been nine fires in the settlement over recent years, seven of them major ones.  What appears to have happened on Monday is that an elderly couple were unable to contain a fire that broke out in their section of the longhouse block and by the time others were aware of it the blaze was out of control.

A simple smoke alarm would have alerted folk around, yet it turns out that these cheap and basic devices have not been installed in the ‘modern’ development of Sungai Asap, despite the billions poured into the dam next door and the billions raised out of stripping timber in advance.

In this case, the fleeing residents immediately turned to the device that was supposed to be their saviour in the case of any further fire.  Just some three months earlier, sparkling new fire hydrants had been installed throughout Sungai Asap as part of a showcase project, rumoured locally to have been financed by the federal government to the tune of a staggering RM200 million, under the auspices of the very same Fire & Rescue Department.

Each of the blocks has been supplied with the glistening red replacement hydrants, locals told Sarawak Report’s informers.  However none have so far been able to confirm the cost of the project or to whom it was awarded.  There was no drill they say to check if the new system works.

It was only last Monday that the local people found out that their new hydrants don’t work.

“The first problem was with opening the hydrant” Stephen Kuleh explained to Sarawak Report earlier today.  “There was no tool that had been provided to do that. However, luckily one of my relatives is a  plant technician at Bakun and he had an implement back in his house that he was able to use to release the water”.

But, it was at that point in the awful drama, as folk were fleeing for their lives and trying to counter the situation on their own, that a far more serious defect came to light. 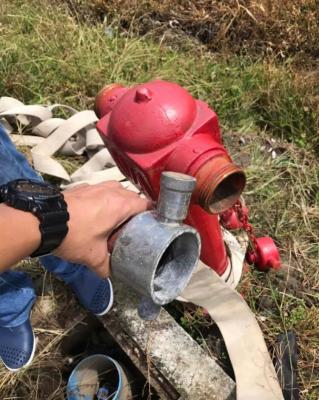 As the residents dragged the hoses from their positions underneath the blocks it soon became apparent that these had not been upgraded to match the shiny new hydrants.

The fitments simply could not be connected with each other and there was nothing provided to bridge the gap.

“Water was now coming out of the hydrants, but they could not get the hydrants attached to the hoses” says Stephen Kuleh, who had explained that there were three hydrants to supply each block.

“The fire authorities and the contractors are equally to blame, because if they had conducted a basic drill after the installation of these hydrants then the problem would have come to light”.

“I think they knew anyway” he continues, “They had a check list and officials must have realised. This whole project was a classic ‘wayang’ [just for show] gesture for the rural people and it happens all the time”.  Sarawak Report has not so far identified which contractors were involved in the project.

If, as reported and confirmed by locals, this continuing fault remains with all the other fire hydrants in the area, where likewise none of the connecting hoses or their fitments have been replaced, then Sungai Asap, which is over 200 kilometeres from Bintulu, remains in deadly danger.

A wave of sympathy and help has flooded in from neighbours and volunteers and companies in the area to make sure these newly homeless refugees have received food, water and clothing as they have sheltered, with no longer more than the clothes on their back to call their own, in neighbouring blocks.

The local MP and YBs have duly made their visits and produced some RM44,000 to meet immediate needs.  However, no mention has been made so far of the deadly failure of the brand new hydrants that were boasted as being the kampungs’ defence against such blazes nor of the continuing hazard that threatens each and every remaining resident until this defect is solved and other basic fire safety measures are put in place.

Just last night yet another longhouse fire beset Sarawak, this time over in Selangau.

It is time that West Malaysians and the federal government took note of the decades long failures over rural provision of services in this wealthy state, which continues to be managed by a political leadership that has been far more focused on the accumulation of their own wealth than the welfare of the people they are supposed to represent. 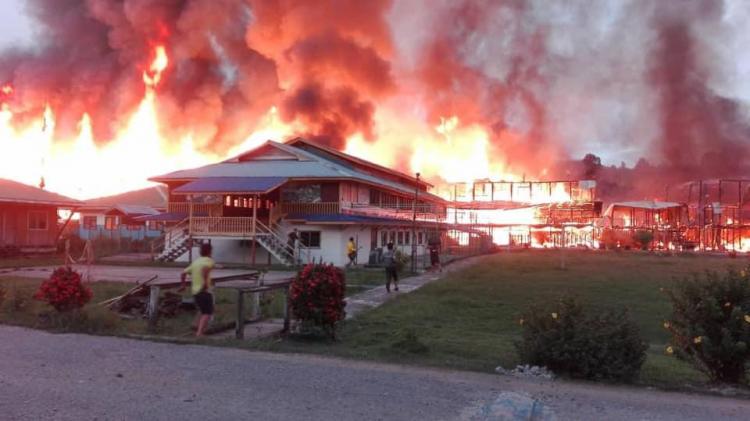