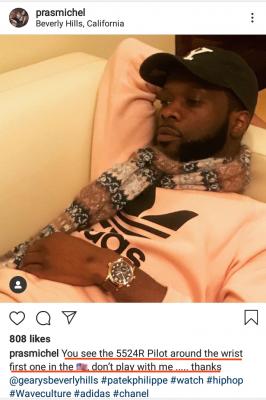 ‘Prat’ Michel’s obsession with flash wristwear marks him as a fully fledged crony of the 1MDB crowd.

In a shocking new development in the 1MDB corruption saga it has emerged that charges are to be levied against singer Pras Michel for campaign-finance violations related to President Barack Obama’s 2012 re-election campaign.

According to Bloomberg Pras Michel will be “accused in Washington of contributing funds to pro-Obama organizations without disclosing their foreign origin”, money that has now been traced to 1MDB.

Pras Michel has already denied separate allegations by the Department of Justice that he later colluded with Malaysian fraudster Jho Low to funnel US$72 million out of 1MDB’s stolen dollars through four companies to bribe members of the Trump administration in a bid to call off the 1MDB investigation altogether. 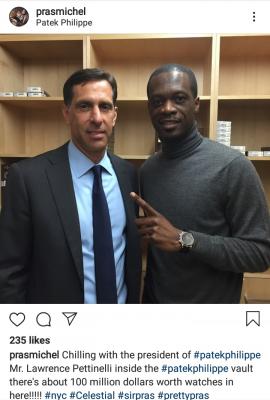 Big time client gets to do a selfie in the Patek vault?

Jho Low’s boss, ex-PM Najib Razak, who continues to claim he knew nothing about the misappropriations from 1MDB and to deny he used it as a slush fund, is known to have conducted a sustained wooing of the Obama government throughout the President’s term of office, famously playing golf with him in Hawaii on Christmas day.

Likewise, he boasted a similar golfing relationship with Trump and it was Trump’s campaign finance chief, Elliot Broidy and his lawyer wife Robyn who received the lion’s share of the alleged 1MDB money as they were engaged to try and call off the DOJ investigation.

Sarawak Report has, of course, broken numerous stories over the years pointing to the suspicious relationships between these 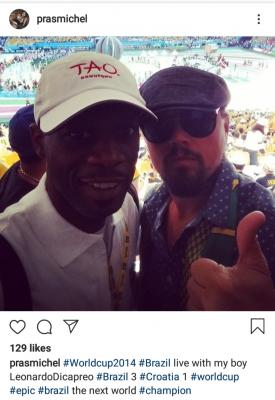 Selfie with DiCaprio and the lads at the Brazil Cup

various parties that indicated exactly the flows of money that are now being uncovered.

The growing body of proof resulting from the US 1MDB investigations sheds fascinating light on how corrupt regimes set about influencing the body politic of the United States by accessing individuals who are trusted by top decision makers.

Jho Low, whom Najib now appears to have admitted did work for 1MDB owing to his ‘good connections’ primarily in the Middle East, used his copious funds stolen from 1MDB to curry favour with Hollywood glitteratti such as the star of the film he funded for Najib’s stepson Riza ‘Wolf of Wall Street’, Leo DeCaprio.

He took a group of such buddies (including DiCaprio and Pras Michel) to the Brazil World Cup, which they attended via helicopter from their luxury accommodation on the super-yacht Topaz, owned by Abu Dhabi sovereign wealth fund Khadem al Qubaisi (who himself received over half a billion dollars worth of kickbacks from 1MDB). 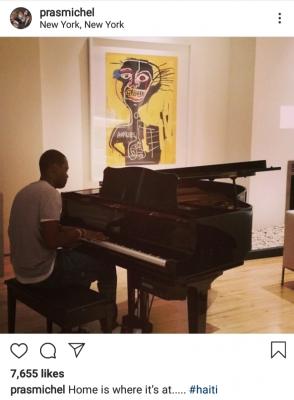 Pras Michel has boasted these relationships and adventures on instagram, where he also reveals that next to his home piano there is a highly recognisable Basquiat painting on the wall.

Basquiat was an artist who was particularly favoured by Jho Low when he tore through the US art markets in 2014/15, buying and selling artworks (often at a loss) as, according to the DOJ, he attempted to launder 1MDB money.

The tastes of this inner circle of 1MDB related operators seem closely aligned.

It was Sarawak Report that first reported the links between 1MDB and Obama finance figures, when we discovered that the ex-president’s fundraiser, a relative named Frank White, had been suprisingly granted a major solar power project in Malaysia funded by 1MDB.

Further investigations showed that White and his barely qualified business partners, who included Pras Michel, had been put in charge of a massive half billion dollar investment fund named Yurus, linked to Aabar, which was the sovereign wealth fund controlled by Khadem al Qubaisi, and also to 1MDB. 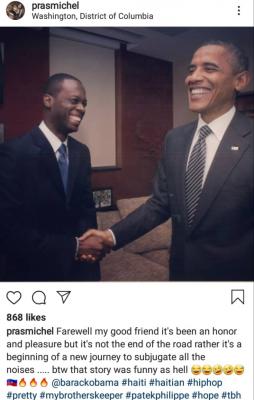 After our expose the fund quickly closed. However, Frank White’s companies made US$69 million in fees for managing Yurus, which appear to have been paid by 1MDB.

Sarawak Report then found from its research into filings with the US government that White’s company (of which Pras Michel was a director) had made substantial donations to a number of democrat campaigns.

As of this moment Sarawak Report is unable to report whether or not these donations form part of the campaign finance violations being cited in the latest charges allegedly being brought by the DOJ against Pras Michel.

By the time Trump entered the Whitehouse in late 2016 the urgency of the 1MDB investigations had reached a new and acute level for Najib Razak and his government, which now faced upcoming elections.

In July 2016 the Department of Justice had brought a series of stunning indictments over 1MDB proving all the allegations that had been levied against it by Sarawak Report, eventually confiscating US$1.7 billion worth of alleged stolen assets. 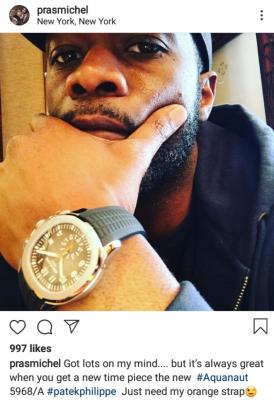 Jho Low was named, as was Hollywood Actor One (DiCaprio) and Malaysian Official One, for whom the description could only match one man, Najib Razak.

It was at this point that information began to emerge that Najib was turning to hire advocates close to Trump instead. A former official on his campaign team, Healy Baumgardner, was engaged for a quarter of a million dollars on a largely unspecified PR contract that under US law she filed with the government FARA list (an open source).

In the second part of 2017 Sarawak Report, along with other news organisations, received leaked documents from Abu Dhabi, which revealed that a firm belonging to the Republican deputy fundraising chairman Eliot Brody had also been hired for millions of dollars to conduct a ‘threat assessment contract’ for Malaysia at the same time as his lawyer wife was hired to represent Jho Low in the US courts on a success fee deal worth over US$ 80 million if she got him off over 1MDB. 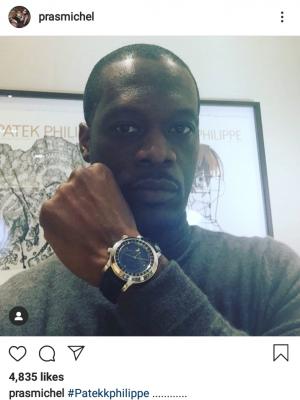 Sarawak Report also published emails sent from Broidy to another key Trump fixer at the time, Rick Gates (now convicted of separate corruption offences) that implied the Republican insider was attempting to use his influence in the government to pressure DOJ personnel to drop the case, which would have presented a win for his wife and got Najib off the hook over 1MDB just before the Malaysian elections.

Instead, the DOJ struck back and charged one of its own officials, who admitted receiving bribes linked to the dealings with Broidy and his wife in an indictment that alleged that Broidy had indeed been paid to lobby Trump.

Pras Michel was also cited in the indictment against the DOJ official, George Higginbotham, on the basis that his companies were being used to funnel cash to pay the various expenses including Jho’s lawyer Robyn Broidy.

It all represents yet more shocking episodes of alleged corruption spiralling out of the stolen billions from 1MDB, which Najib to this day maintains in court that he knew nothing at all about. 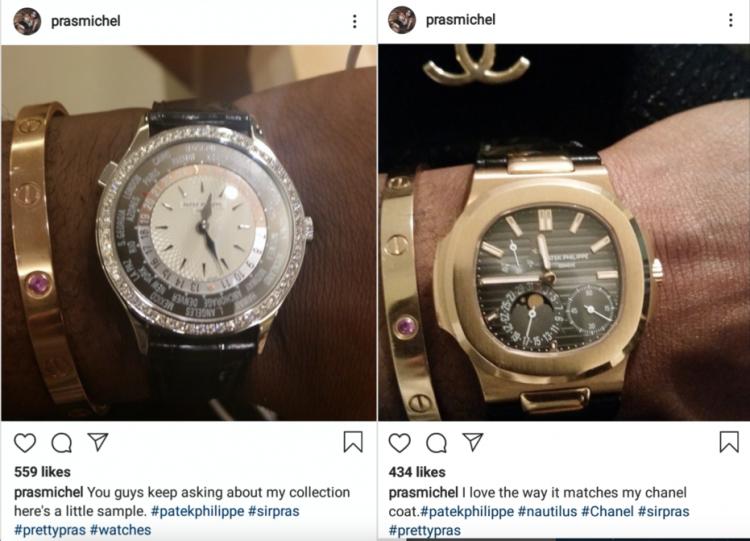