The Malaysian Anti Corruption Commission has for some time been afflicted by a selective blindness, particularly when it comes to the pillaging of Sarawak by the Taib family and their cronies.

The fact that huge contracts and concessions have delivered almost the entire wealth of the resource rich state into the hands of this clique of kleptocrats has long been glaringly apparent to all in Malaysia and beyond.

The blatant nature of that theft became clear once the details of the Sarawak Land Registry were leaked to Sarawak Report in 2011, showing outrageous handouts to Taib’s relatives and political allies. That evidence mirrored the fabulous and ostentatious wealth exhibited by members of the family, who have invested everywhere in the world except in improving the livelihoods of people back home in  Sarawak, who have lost their lands to Taib-sponsored logging and landgrabs.

Likewise, after the Construction Industry Development Board (CIDB) released details of public contracts online, proof of similar gross favouritism was also abundantly revealed in a whole swathe of what are politely termed ‘negotiated contracts’ in Sarawak – i.e. not put out to proper tender.

Sisters, wives, daughters, nieces, cousins and daughters-in-law of the Taib extended family, plus equivalent menfolk and hangers-on have all been revealed as beneficiaries of lucrative engineering and other contracts, rapidly sub-contracted for huge profits, of course, to firms who could actually do the work (the website was soon closed to the public under Najib following several scandalous exposes by Sarawak Report and has yet to be made transparent again by the new government).

Despite endless protests over this outrageous situation, statements from the MACC have till now stuck to an unaccountable assessement that investigations by the agency could detect no evidence of wrongdoing or corruption.

One reason proffered by certain spokesmen has been that according to an interpretation of some piece of legislation passed in 2009, unless the minister who stood to benefit from any particular state handout was in the room at the time and signed the concession/contract in question then they could not be held resposible for having corruptly acquired the contract.

This strange interpretation of the law has led to an acknowledged ritual, whereby the likes of Taib Mahmud (who was chief minister, finance minister as well as the planning and resources minister for decades in Sarawak) would step outside the cabinet room whilst his juniors and deputies signed over lucrative chunks of the economy to his family and business and political cronies.

Any half decent lawyer could construct an overwhelming case for Criminal Breach of Trust under such circumstances.  However the MACC has till now failed to present the overwhelming dossier of evidence confirming this pattern of malpractice over to the AG’s Chambers to reveiw and prosecute.

This is despite the fact that the MACC plainly recognised the problem of severe corruption in Sarawak in its own report, submitted back in 2014 to parliament.

Under a section dedicated to the anti-corruption agency’s own review of the procedures governing land approvals in the state, the report acknowledged that the present set up was open to  “abuse” and “manipulation” and suggested alterations in the land code to prevent ministers handing concessions to their own families: 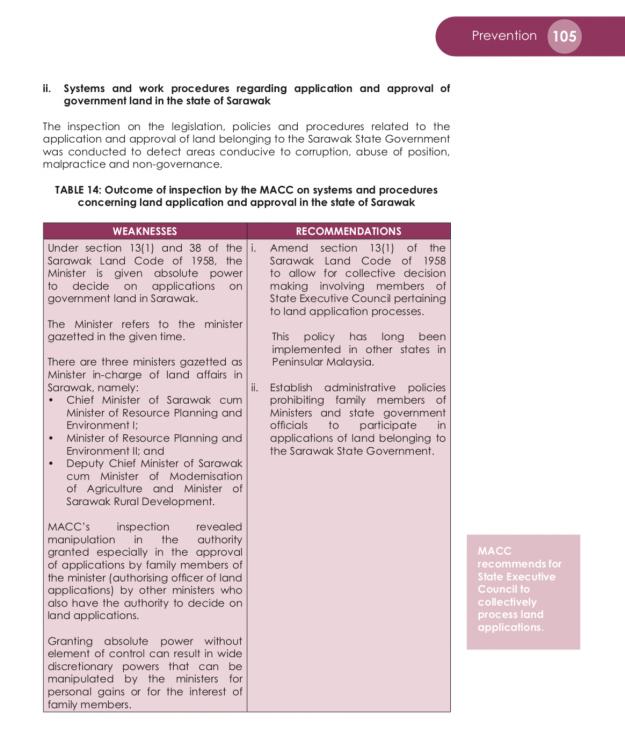 Yet despite making this recommendation and acknowledging the problem of abuse and manipulation, the agency has to this day refused to take action to hold any of the abusers and manipulators to account.

Lax procedures might make abuse and manipulation easier to carry out, but that does not absolve those responsible – a thief remains a thief, even if a door has been left unlocked (especially if it was the thief who held the responsiblity of locking it).

This failure to act mirrors the very same stance adopted by the MACC in the past over similar evidence of corruption next door in Sabah and likewise over 1MDB and all the evidence of federal corruption under Najib Razak until both regimes were over-thrown by the GE14 elections. All these matters are, of course, now being prosecuted.

Following GE14 Sarawak ought not to have been exempted, merely because it is yet to hold its own elections in the state.  The MACC is run by the federal authorities and under the new government’s anti-corruption agenda it has been inexcusable for it to have failed even to investigate the well-evidenced police reports tabled by members of the public and lawmakers against the Taib family mafia in Sarawak.

Now there is a new head of the MACC this attitude should change and the authority must conduct its duty in this East Malaysian state in exactly the same manner as elsewhere and  complete a thorough and extensive investigation.

Meanwhile, given the volume of evidence already exposed by this site and by numerous other agencies and public figures from Sarawak itself, the Governor ought to be suspended from his position to prevent him from influencing that process.

Likewise, all licences and contracts for land use changes in the state should be frozen immediately on suspicion of corrupt practice, in order to prevent further destructive logging as Taib’s wealthy cronies race to make as much more money as they can before the music stops.