There is a well known phenomenon, which is when a golden goose is set to stop laying its eggs those who benefitted the most scramble for the last bits of loot before the party shuts down.

This is now happening in Sarawak, with big time businessmen still sending bulldozers piling into remaining peatland forests, highlighted globally as one of the most destructive environmental practices, which both the Malaysian and Indonesian governments have vowed to halt immediately. 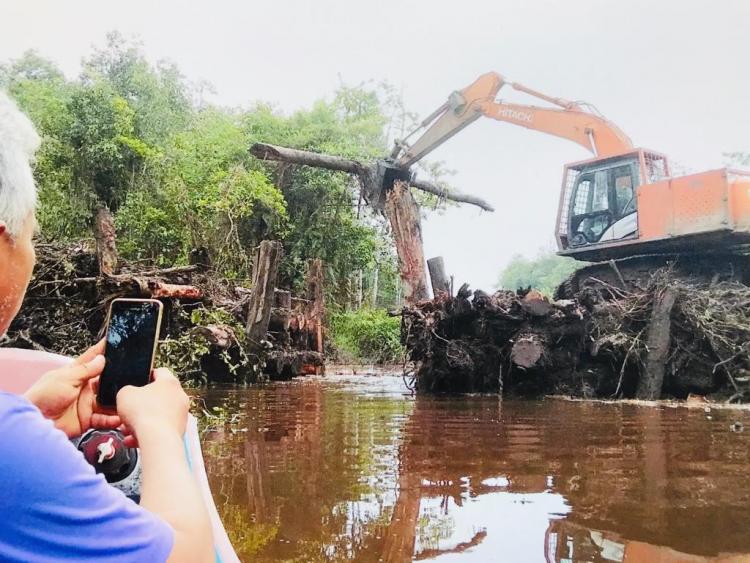 Just last week desperate native landowners in Mukah were forced once again to issue a police report against the company of one of the Taib family’s favourite crony plantation tycoons Yee Ming Seng (who has caused uproar tearing up land in the Mulu world heritage area in a highly dubious concession granted to Taib’s son) and his partner, another big time Taib crony, Barry Tan.

Defying calls across the nation to halt further oil palm plantations (which are currently so loss-making that thousands of hectares are presently being left unharvested) Yee Ming Seng’s big hitting DDB Bawan Plantation Sdn Bhd has recently acquired a permit to plant a vast 34,000 hectares of native owned peatlands in Mukah. He then moved like greased lightening, tearing down the forests and the local folk’s orchard areas without so much as a warning let alone stopping for permission.

The speed and shocking nature of this blitzkrieg has all the hallmarks of a planned raid by those who calculate that once questions start to be asked their operations would undoubtedly be halted. It also has the hallmarks of a timber grab under the guise of an oil palm concession. 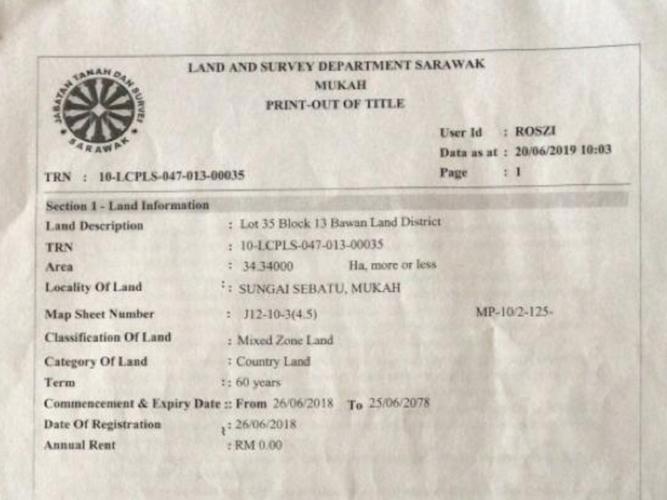 Official documents produced by the company indicate they received their title as recently as June 26th of last year – the bulldozing began a year later and now the area is reduced to the equivalent of a World War battlefield zone. Indigenous rights activist, Matek Geram has summed it up succinctly:

Bawan river and natural resources have been destroyed by DDB Bawan Plantation Sdn Bhd activities which are encroaching into community lands. After they received a land title from the state government. 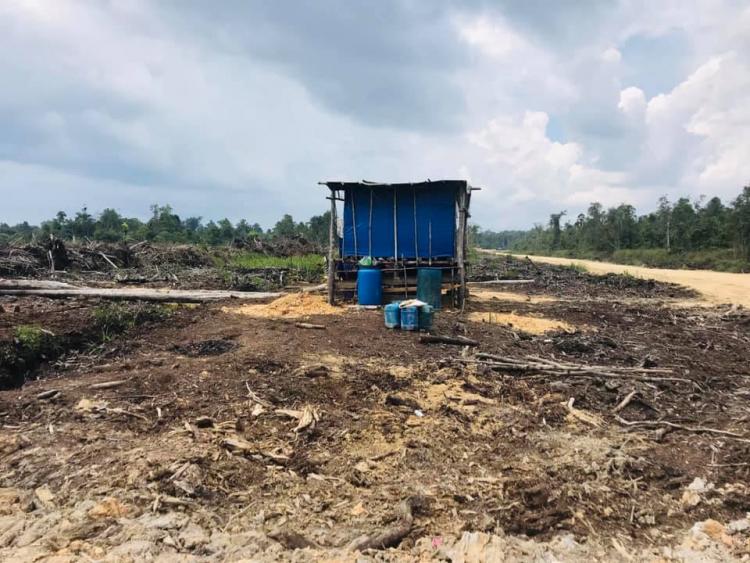 By the time stunned locals had turned for help and placed their police report on September 23rd, DDB Bawan ‘Plantation’  had stripped out millions of ringgit worth of timber and whisked them away. Leaving the landscape dead, say locals who can no longer find fish in the local river.

Clearly, this tycoon and his associates have learnt from the experience at Mulu, where the bulldozing has been brought to a halt and felled trees left to rot after their company Radiant Lagoon (bought off Taib’s son Abu Bekir late last year) was placed under the spotlight thanks to international outrage and then caught out over having illegally bribed local headmen to strong-arm their communities into signing up to agreements they had not properly understood.

The Mulu outrage was discovered earlier this year and the project has been frozen pending inquiries still apparently underway.  So, why was this new clearance in Mukah approved to the same offender and the local people left entirely unaware?

These indigenous landowners now find themselves locked out by force from their own former gardening areas and orchards as bulldozers have pulled down their trees, trampled the rivers and disturbed the peatland. This from their police report: 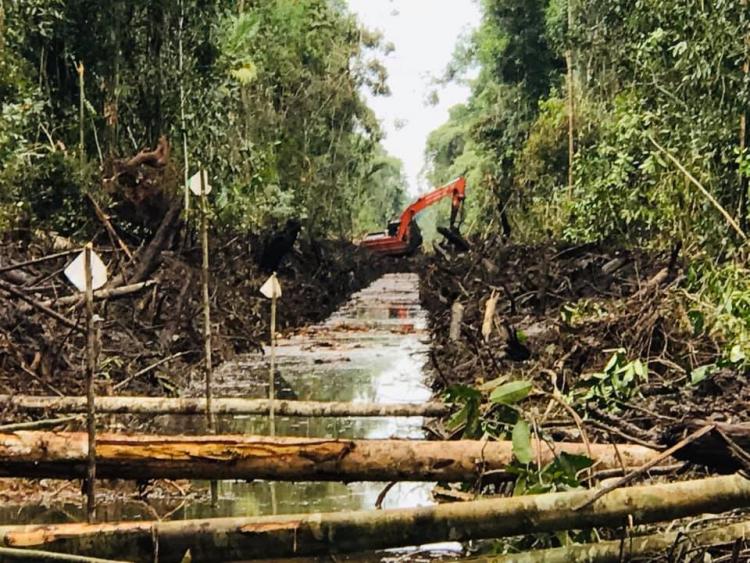 So, what is the police force doing, along with the Land & Survey Department and MACC?

Because the briefest glance at the title provided to this company shows that the actions they commenced after receiving it flagrantly abused the provisions in numerous illegal ways.

First, this is a Provisional Licence only.  The terms of the provisional licence, given  before the bulldozers moved in and started ripping out the trees, include provisions that no action should be taken prior to a survey of the land; that no disturbance should take place within 66 feet of any river (see above) and that there should be no timber extraction from the area without a further licence.

Furthermore, the implentation of the basic licence requires for an Environmental Impact Assessment, a major report in the case of such an enormous area, to be conducted and copies provided to the Secretary for Environmental Resources prior to project implementation: 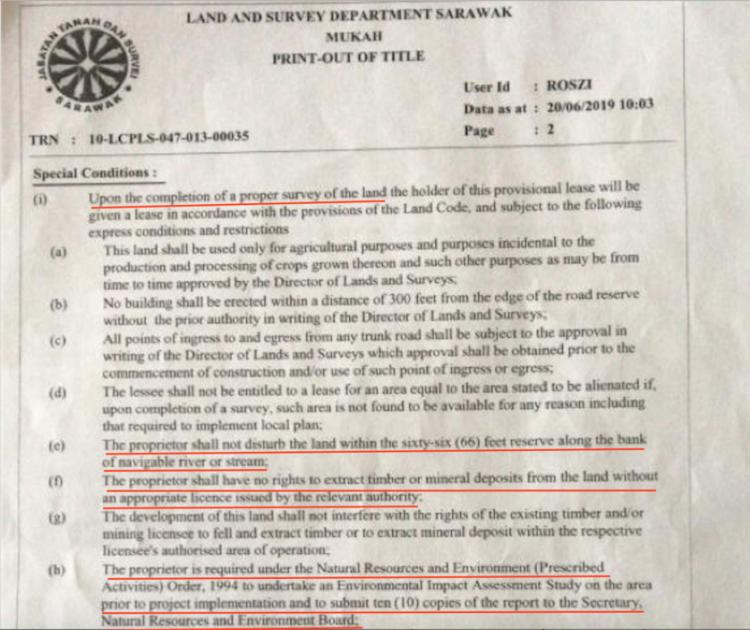 Locals have yet to receive evidence of EIA or timber Licence

They appear to operate under the maxim of ‘sue me after the event if you think you can afford it’ principle, which works fine if the forces of the law don’t work and you are buddies with ‘The Big Boss’.

So, what can we expect from the Sarawak State Government who offered up that provisional license?

The present GPS leadership might seem too preoccupied to care, concentrated as they are on lavishing as many of the state government’s remaining finances as possible on ‘projects’ in advance of the upcoming state election.

Indeed, last year Deputy Chief Minister James Masing publicly vowed an intention to spend the state’s entire RM31 billion reserve as quickly as possible just to prevent others getting their hands on it (everyone knows that for every RM1 spent on a GPS project 95 cents is creamed off by the kleptocrats themselves).

However, the situation as highlighted by this incident in Mukah is in fact much worse, in that it proves the total failure of the present federal government to control this rogue administration and protect the Sarawak people.

Last September, Malaysia’s Primary Industries Minister advertised to the world that the country would tackle its poor reputation over palm oil by drawing a line against any further plantation licences, particularly banning peatland destruction. Yet within weeks she was back-tracking having visited Sarawak to be told that ‘existing licences’ could not be withdrawn.

In March, Teresa therefore conceded a further 600 thousand hectares for destruction in Sarawak owing to these existing licences in return for the promise that no more concessions would be handed out (already breaking a BN election pledge of 2016 under Adenan Satem to halt further logging).

Could this be the cause for the hurry to log out peatlands before they are identified?

Let’s get the full truth

The local folk of Mukah have an absolute right to transparency over this transaction on their native land against promises by GPS and without notification or permission regarding their native rights. Instead, they have entered a familiar cycle of police reports and harassment followed by expensive legal battles – everything is stacked against them.

Meawhile, the questions arise as to whether this tranche of land may or may not be linked to a strikingly similar large area in this particular region that was also surreptitiously handed over to the Taib family – the 34,000 hectares handed to Lanco Plantations belonging to Taib’s brother Arip Mahmud?

Are the Taibs continuing to attempt to cash in their landbank in Sarawak as fast as they can go before the next election, just as was the case with Mulu?  If so, it seems to fit the pattern and action needs to be taken to freeze all concessions for land and logging in order to conduct a full corruption audit into a series of thefts that make 1MDB look like dedak for late-comers. 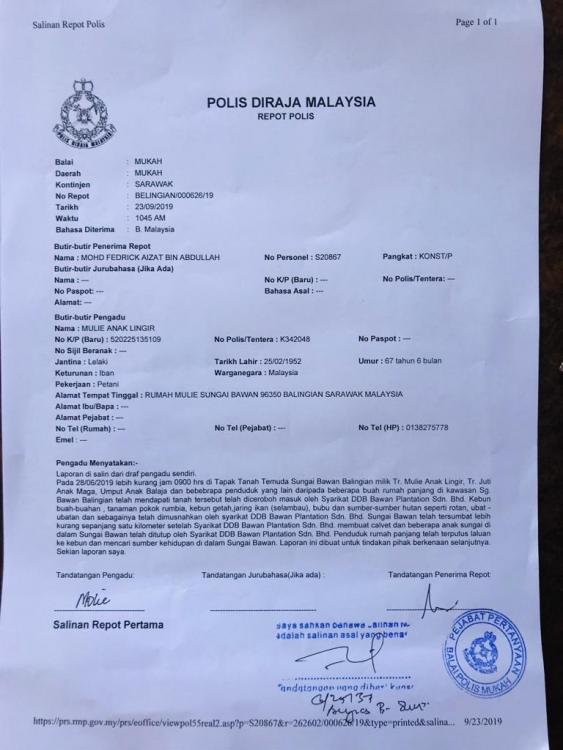