Once again the Tiong family of Rimbunan Hijau have been caught out illegally destroying  remaining forests in the South Pacific. Sarawak Report can reveal that two sons of Tiong Thai King, the current elected YB* for Dudong and the brother of RH founder Tiong Hiew King, are among the shareholders of a company that has been reported as being booted out of the Solomon Islands.

The rare strike against the company named Gallego Resources, which has been destroying vast swathes of land on the Solomons island of Guadalcanal, was highlighted by a major expose by the magazine National Geographic earlier this month. The article said that:

A Malaysian logging company named Gallego Resources had begun carving great scores through the forest— its men felling the tall, grey-barked kwila and the akwa strung with fruit, then dragging them off the slopes for export, leaving nothing to stop the rains from taking the topsoil.

The [local] Marasans knew what would happen next. The forests they relied on for food, water, and timber would be destroyed. And without the trees, they would have to eat imported rice and build their houses with lumber-yard wood bought with the tiny sums the logging firms paid communities for every exported shipment. Teenagers might take dangerous jobs and young women would be coerced into exploitative temporary marriages with foreign workers. There would probably be a spike in alcoholism too, and with it, violence.

They knew this because it had already happened most of the way along the Guadalcanal coast—and across nearly every other part of the archipelago since logging began soon after independence from the UK in 1978. Foreign companies, mostly Chinese and Malaysian, are now stripping trees at more than 19 times the sustainable rate, according to Global Witness, making Solomon Islands the second largest supplier of tropical logs to China. [National Geographic]

According to National Geographic locals in Marasa became aware of Gallego Resources when it arrived on the scene in February 2018. Desperate and afraid of the consequences, community members began a campaign and reached out to local activist Philip Manakako in a bid to help stop the logging and to investigate the firm. Through sheer tenacity, their efforts over the next few months paid off and Gallego was finally issued with a stop work notice by the Ministry of Environment in August 2018. By the end of the year, Gallego had withdrawn its machinery and its workers from Marasa.

Gallego turned out to be operating under a license granted in 2015 for a neighboring area. The required local consultations, environmental impact reports, and site inspections all appeared to have been neglected. They were violating rules on operating close to tributaries too, and had offered one village only an empty water tank by way of compensation for the damage they had caused.

Equipped with this information, Manakako lodged appeals and applied for stop notices. In Honiara he wrote an article calling for Gallego to be investigated. He wrote letters too and met with company leaders. They tried to buy him off, he says, offering huge sums for a man with no job and a family to feed.

The Ministry of Environment finally issued a stop notice in August 2018. But Gallego continued logging. It issued another a few weeks later, which was also ignored, at first. But as the year came to a close, the pressure on the company mounted. Gallego finally halted, then withdrew its machinery and its workers for good. The company did not respond to requests for comments as to why it left.

Following this expose Sarawak Report researched the ownership of Gallego Resources to find that it is yet again a subsidiary of one of the big Sarawak timber companies Rimbunan Hijau, belonging to members of the Sibu based Tiong family. The shareholders include sons of the politically exposed Tiong Thai King who is a member of the local state parliament. 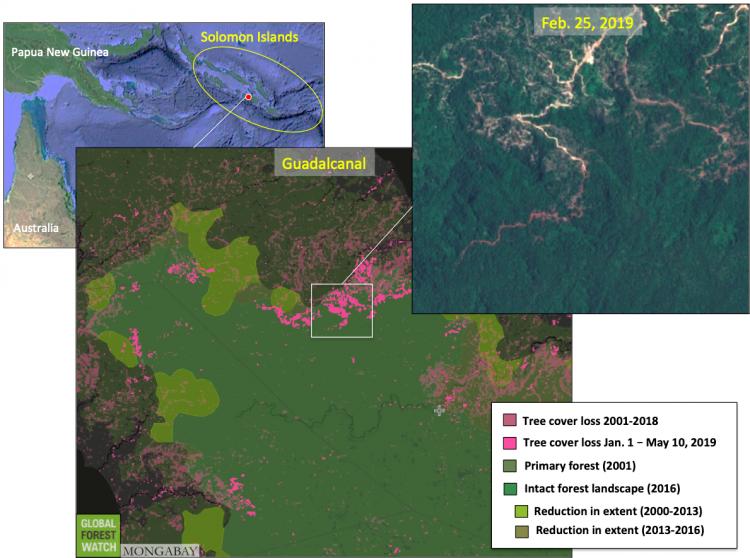 The revelation follows hard on the heels of Sarawak Report’s major expose of the shameful logging records of Sarawak’s Rimbunan Hijau, WTK and other Sibu-based businessmen in Papua New Guinea. Tragically, Sarawak’s record in the Solomon Islands is no better and  Rimbunan Hijau’s pattern of activity mirrors exactly what has happened to the tropical rainforests of Borneo, PNG and other precious eco-systems at the hands of the same few Sarawak businessmen.

As in PNG logging in the Solomon Islands has been criticised for being cloaked in deception, destruction and corruption, as pointed out by Professor Matthew Allen in The Political Economy of Logging in Solomon Islands:

‘The history of the forestry sector since the country’s independence has been a woeful tale of corruption, greed, profligacy, patronage, tax avoidance, maladministration, incompetence, and environmental destruction’. The state has forgone hundreds of millions of Solomon Island dollars in potential revenue due to tax exemptions and the undervaluation and miscategorization of log exports.

A recent report commissioned by the Solomon Islands’ Ministry of Finance suggested that if logging activities continue at their current pace, natural forests will be exhausted by 2036. 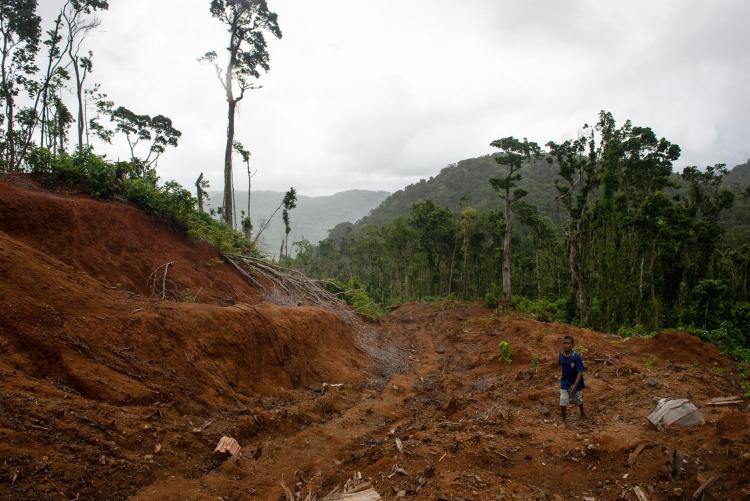 SR looked into this shadowy “Malaysian company” operating in Marasa and we can now reveal that it is owned by none other than the Tiong family of Rimbunan Hijau.

Gallego Resources’ latest Annual Report, which was filed with the official Solomons Business Registry, states that its directors as of October 2019 were Chiong Hee Tiong, Chiong Yong Tiong and Mr Hook Ping Wong. Its shareholders were the two Tiong brothers.

Chiong Hee and Chiong Yong are the sons of RH’s Tiong Thai King, who is the current YB for Dudong and the brother of RH founder Tiong Hiew King. Tiong Thai King was named in SR’s recent report over his involvement in a number of logging ventures in PNG.

Just two months ago in November 2019, Chiong Yong Tiong appears to have transferred his own shares in Gallego to another Malaysian by the name of Daniel Teck Hsin Ling. 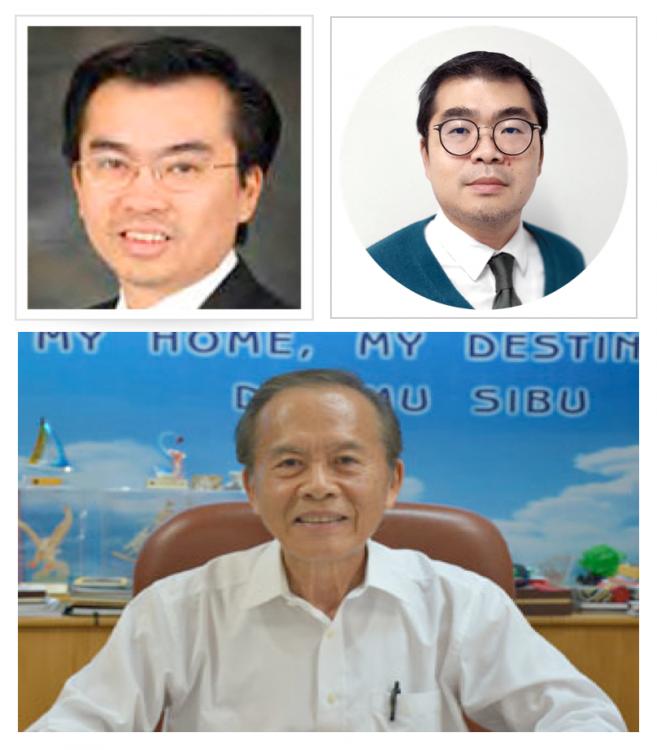 Gallego Resources is tied in to another Rimbunan Hijau company called Mafrica Corporation Sdn Bhd according to its contact email address ([email protected]). Mafrica Corporation is a private company headquartered in Sibu, Sarawak. Its website is curiously blank for a company that has been known to be active in parts of Africa.

A company bio uploaded online in 2017 however is much more revealing:

From its home base in Malaysia, Mafrica Group is expanding aggressively both and home and overseas. Mafrica has successfully made its presence in a few overseas countries including Equatorial Guinea, Indonesia, Solomon Islands, Central Africa, The Republic of Congo and New Zealand.”

Mafrica’s filing with the Register of Companies in Malaysia lists YB Tiong Thai King and his two sons as its sole directors. Shareholders of Mafrica include Tiong Thai King, his brother Tiong Hiew King, other members of the RH family and businessman Peter Hii Hung Kai who has likewise been exposed by SR for his involvement in PNG.

The Tiong sons are involved in a number of RH-owned companies in Malaysia and elsewhere along with their politcally exposed father. For example, Chiong Yong and his father Thai King are directors of RH’s Oregon Group registered in New Zealand and Chiong Hee is a director of Jaya Tiasa Berhad, which is listed on the Kuala Lumpur Stock Exchange. 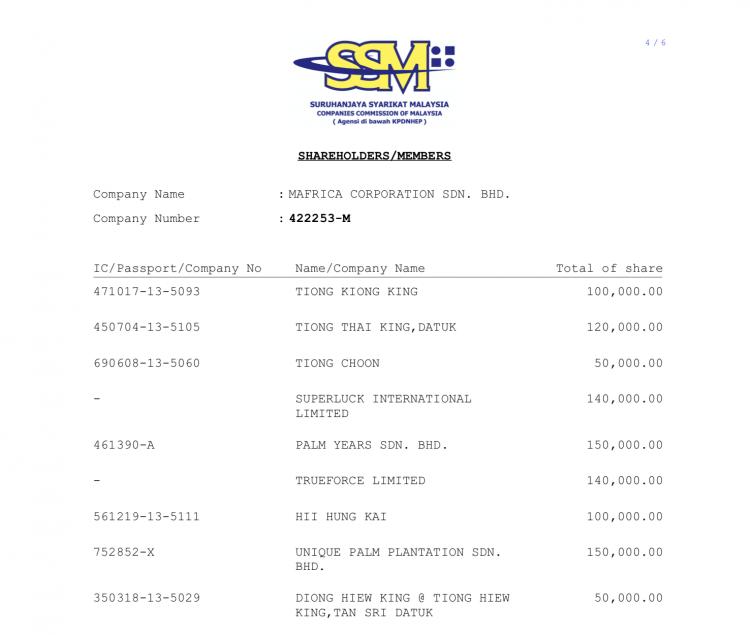 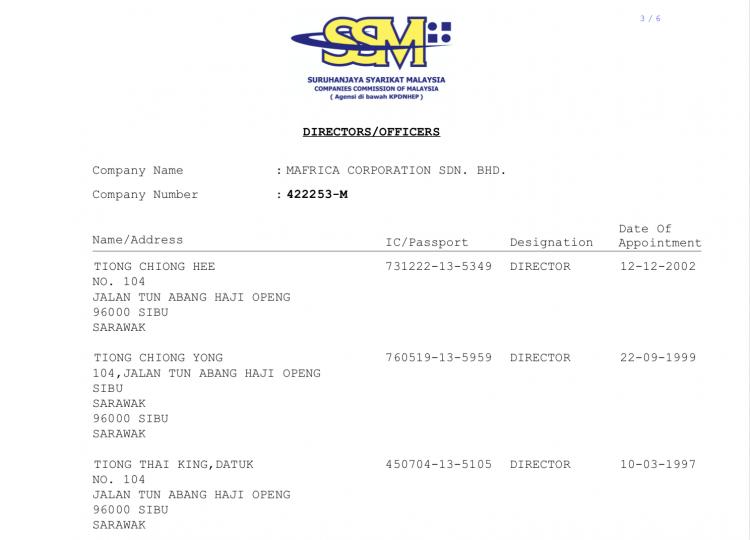 Thanks to information provided in a further document filed with the Solomons Business Registry in 2019, SR can reveal a further 16 companies (predominantly involved in forestry activities), which are also owned/run by the Tiong brothers and/or Gallego Resources. The contact email for these additional companies is once again the same ([email protected]). 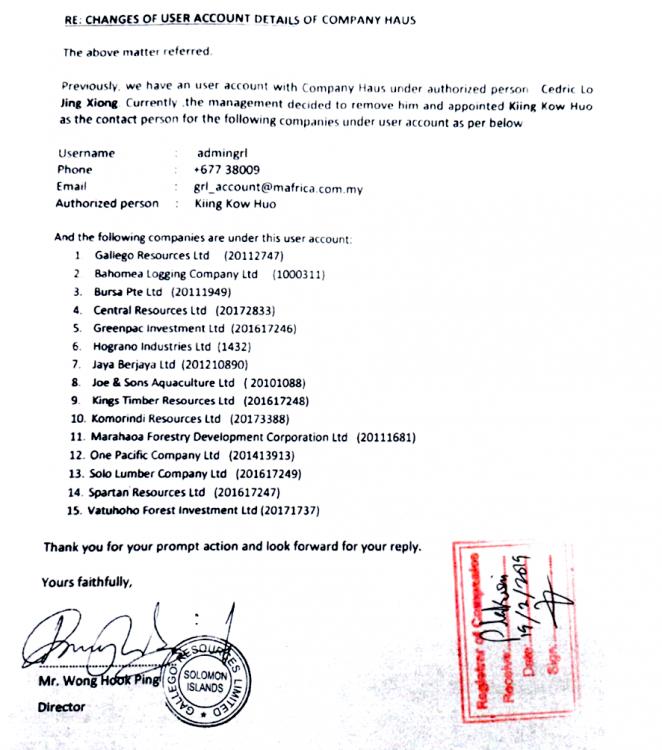 Letter filed by Gallego Resources with the SBR in 2019

How have these other companies conducted themselves in the Solomons you might wonder? Take a look at the case of One Pacific Company Ltd for example.

In 2018, an investigation by the Island Sun uncovered what it said was “major fraud” in the illegal logging of 5,560 hectares of virgin forest in the Komaridi Reserve in East Guadalcanal which was on a 75-year lease to the Government. The case involved the Commissioner of Forest, Reeves Moveni, a landowner company and One Pacific Company Ltd.

According to reports, Felling Licence No. A101521 was granted by Mr Moveni on 23 April 2015 to Mbetilonga Landholdings Group Community Company Ltd (a so-called landowner company), which entered a five-year mutual agreement with One Pacific Company Ltd to undertake the logging. That felling licence is reportedly due to expire in April 2020.

Mr Wong defended the company but following the expose, one local told the Island Sun that:

“Landowners had received no benefits whatsoever from the logging operations. The owner of One Pacific Company Limited, Wong Hook Ping, should be deported for misleading non-landowners into signing a deal which benefits no one but the company and its workers. The Community has never received a single penny from this money. We don’t even know where the money has and is going.”

The local source who wished to remain anonymous also said that Mr Wong had told a meeting of landowners that they should not worry about government officials as “they are my boys”.

“Mr Wong also told us that one senior government official is receiving $4 per cubic meter from every round log exported” they added. 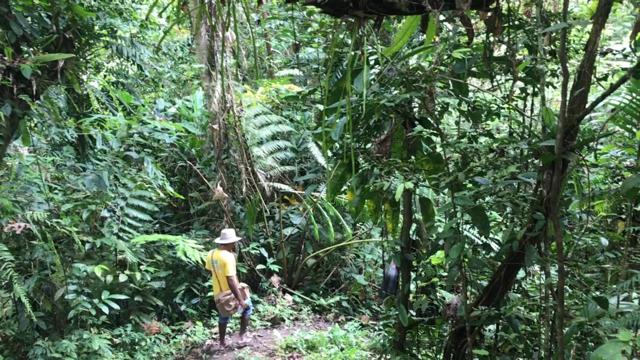 Corruption and bribery are rife within the logging industry in the Solomons and it’s a select few who have benefitted at the expense of the many, as observed by Professor Matthew Allen:

While some politicians, public officials and landowners have benefitted from royalties, profits and bribes and inducements, it is foreign owned logging companies that have consistently captured the bulk of the economic rent from forest resources. They have achieved this through a range of tax avoidance practices.

In PNG, SR has reported how Sarawak’s logger barons have been responsible for passing bribes to local and high level decision makers, whilst not declaring a taxable profit in the process. Have RH been doing the same in this South Pacific nation where timber corruption is also commonplace?

Once again, SR emphasises that it is time for Malaysia to tackle the source of this criminality back home in the state of Sarawak, where these timber mafia companies have been protected by the state government for far too long.

SEE BELOW FOR COMPANIES OWNED BY RH IN THE SOLOMONS: 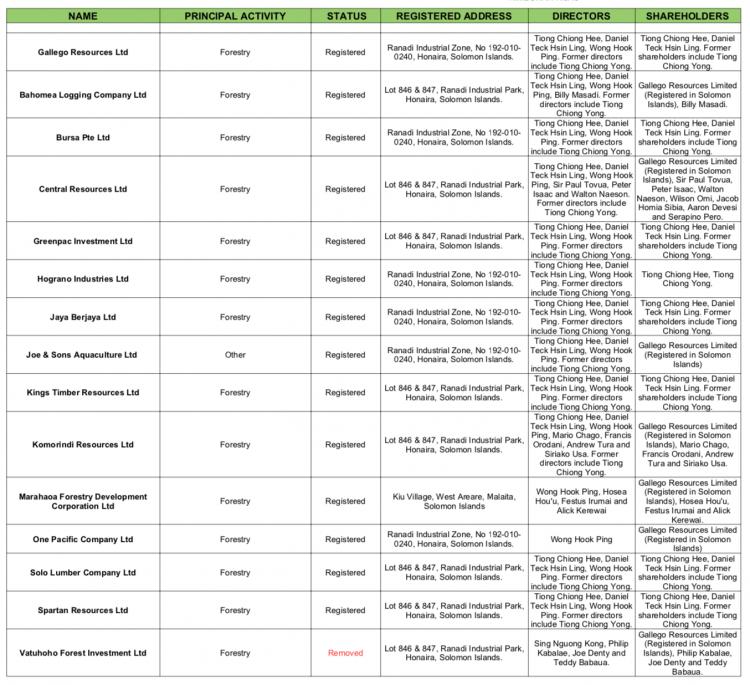 * Sarawak Report has updated the article to correct the title of the elected lawmaker to confirm that he is a state official not a federal seat.