Sarawak Report has detailed evidence showing how a Kuwaiti royal personage, the former elder son of the ex-Prime Minister of the emirate, Sheikh Sabah Jaber Al-Mubarak Al-Hamad Al-Sabah, agreed in 2016 to front as the payer of legal bills for the Malaysian financial fugitive Jho Low.

The money used by the Kuwaiti royal to perform this service can be traced to multi-million euro payments from a subsidiary of the Chinese state owned development company CCCC (which was censured and banned by the World Bank at the time over separate corrupt activities) to a company controlled by Sheikh Sabah, the little-known Comoro Gulf General Trading & Contracting Company.

Evidence shows that Jho Low, who acted as the ‘fixer’ for ex-Malaysian prime minister Najib Razak to facilitate thefts through 1MDB and other transactions, orchestrated these transfers. Sarawak Report has learned the CCCC payments were made in return for the granting and massive inflation by 100% of Malaysia’s East Coast Railway Line project to the Chinese company just a few weeks earlier in July 2016.

Sources say a total of US$3 billion was promised as “commission’ for the inflated deal by the Chinese construction company – money that would, of course, have to be ultimately repaid by Malaysian taxpayers.

Invoices sighted by Sarawak Report show that the money transferred to the Kuwaiti company was not only used to pay the as yet unexplained fees of global law firms such as Kobre & Kim, Schillings and Gibson Dunn & Crutcher – payments that could well be argued as benefitting Jho’s “Big Boss” Najib as well as himself – but also to pay millions of dollars owed to luxury “Concierge Services” and for the upkeep of the super-yacht Equanimity.

Equanimity was confiscated by the Department of Justice in a high-profile ‘snatch’ operation off Indonesia in 2018 and returned to the Malaysian government. The use of supposed “commissions” to Najib in return for the granting of the rail project (something Jho Low was in no position to do himself) appears to confirm suspicions that the super-yacht was in fact being managed by the businessman on behalf of his patron in power. 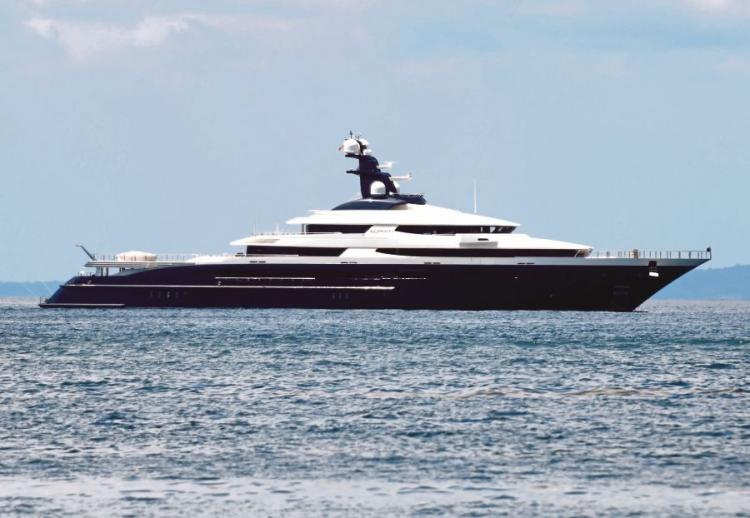 As well as the payments to US law firm Kobre & Kim and UK based reputation management outfit Schillings, Jho Low had made clear to his Kuwaiti associate that another top priority for settling fees, once the first payment of CHY450 million was transferred from CCCC September 20th 2016, was the company WMG PCC Ltd (Wright Maritime Group), a Los Angeles based yacht leasing and management company with a euro bank account in the UK off-shore Island of Guernsey. 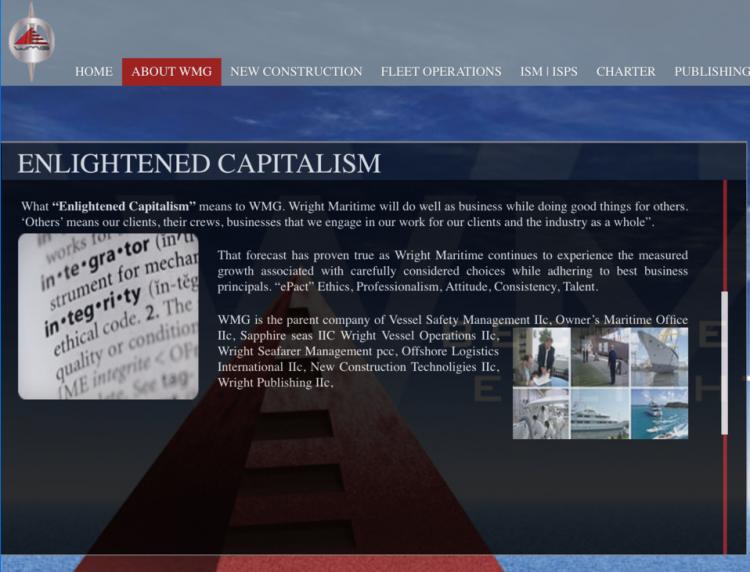 Enlightened Capitalists don’t probe too deeply into their clients?

The bill paid by Comoro Gulf General Trading & Contracting Company into WMG’s Royal Bank of Scotlands’ account in St Peter’s Port totalled a jaw-dropping seven million euros, presumably for crewing the luxury vehicle, which is a service the company provides.

WMG’s ‘About Us’ section is headed under the title of “Enlightened Capitalism’, which presumably involves not enquiring too deeply into why a Kuwaiti royal had ‘out of friendship’ offered to pay such a bill for a man who was by then the world’s best know financial fugitive and branded fraudster. 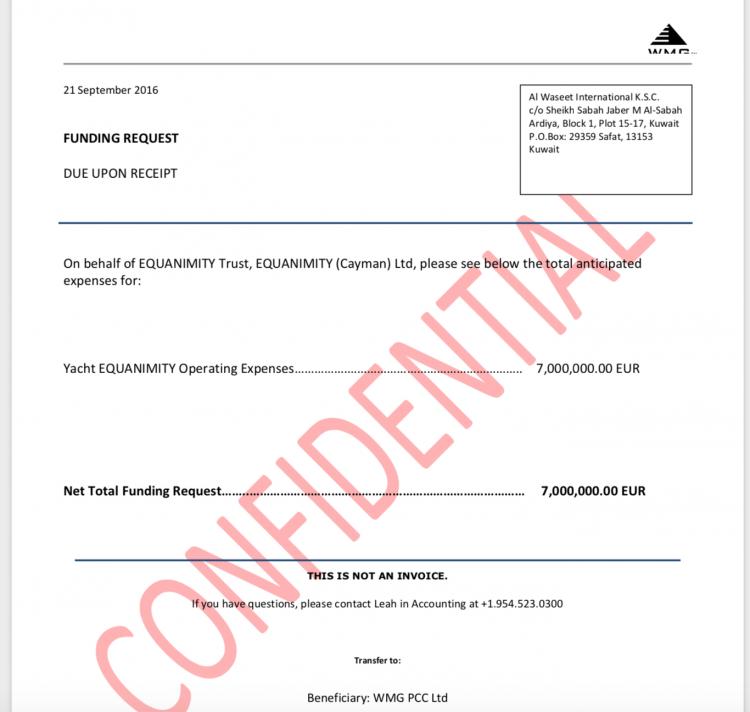 For the management of Equanimity – request for payment was made to Sheikh Sabah, although Jho Low was the known owner of the yacht

Sarawak Report has ascertained that although the payment was made to WMG and Jho Low’s law firms from money transferred from CCCC into the Comoros Gulf General Trading & Contracting Company, those companies’ invoices were made out to a better known entity in which Sheikh Sabah had shares but did not control, namely the Kuwait based Al Waseet International group.

Sources have informed Sarawak Report that this was to improve appearances for the benefit of those companies.  After all, they were already being asked to receive their payments from a politically exposed personality (the son of a prime minister with no identifiable reasons to perform such generous gifts to Jho Low) after Jho Low had himself been exposed as a fraudster wanted by international investigators.

Another major beneficiary from the same concealed kickback fronted by Sheikh Sabah was a so-called ‘Concierge’ Service, Concierge Leasing LLC  based in London with offices in New York. The company was set up amidst considerable publicity by the trendy British aristocrat, Lady Cosima Somerset, related to Jemima Khan and once friends with Princess Diana. 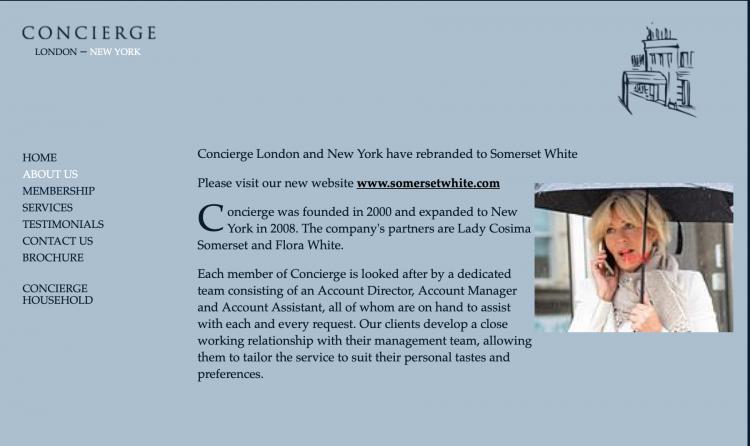 Pandering to the every whim of dodgy new money?

The brainwave business model behind Concierge (and other outfits of the same ilk utilised by Jho Low) is to cater to the every luxury whim and need of an increasingly wealthy super-rich who cannot be bothered to manage their own affairs.

As the company advertised “Each member of Concierge is looked after by a dedicated team consisting of an Account Director, Account Manager and Account Assistant, all of whom are on hand to assist with each and every request”. Alternatively, Forbes Magazine termed Concierge “A highly trained force of femmes fatales–experts in stealth, precision and persuasion–circle the globe, moving with equal ease through border crossings and society balls. Their mission: to execute the wishes of an exclusive group of the wealthy and powerful.”

Given that moving round the world with stealth and slipping through border crossing was a key priority for Jho Low at the time, one can imagine he would indeed have required the expert services of these well-connected western females, able to provide members with speedy but discreet access to private jet hire and places to stay.

Invoices from manager of Concierge, Flora White, to Sheikh Sabah issued during the course of 2016 total £2 million sterling plus $2 million dollars in round figures, which were paid by the Sheikh on behalf of Jho Low for unspecified services apparently in London and America.

It is possibly no coincidence that, although he was by then an international fugitive, Jho Low was indeed spotted in London at a well-known Malaysian restaurant as late as December 2015, according to informants who contacted Sarawak Report.

The invoices were likewise issued to Sheikh Sabah under his address at Al Waseet (as opposed to the Comoro Gulf General Trading & Contracting Company from which they were paid) with a note of explanation by Ms White referring to an apparent agreement by him to cover such expenses out of “friendship” – the same arrangement was reached with Jho Low’s law firms:

“As per the discussions and documents provided to our client(s), we require a transfer of $1,250,000 to cover necessary costs with Concierge New York for the benefit of our client(s), whom we understand you have agreed to assist monetarily either directly (or through your nominated entities) given your friendship with our client(s)”

All four bills were settled on or shortly after 23rd September after the arrival of the suspect CCCC money into the Comoro Gulf General Trading & Contracting Company account.

Clearly, given that since early 2015 Jho Low had ranked amongst the world’s most famous fraudsters, ‘enlightened capitalism’ also extends into the ‘concierge’ business and delving too much into the affairs of one’s wealthy clients or reporting on the strange sources of their financial settlements is not the done thing.