Over the past half century, as Sarawak’s rich corner of the earth has been raped of oil, timber and so much besides, there has been a pattern.

With all the strengths on the side of the marauders the native people (described as ‘squatters’ by the incoming Taib family and their businessman controllers) could only stand up for themselves if they stood together.

So, of course, the exploiters took care to divide them by using money. Big bucks to buy over the leaders, whom the people had a right to expect to stand in front and defend their interests, and smaller amounts of dedak to keep the armed regime and its administrators happy.

Time and again the ultimate betrayal of the Sarawak natives came from their own leaders, who when offered riches chose to join in with stealing all the wealth and to keep their people poor and ignorant of the comforts that would have come with more honest management of their lands.

And, today the pattern was on display once more in the bogus parliamentary sitting put on by the PN coup coalition. There on the side of the oppressors were two Sarawak MPs who owe their positions to the determined efforts of their constituents to vote for change and reform at GE14.

All it took for the likes of Ali Biju, Willie Mongin was the offer of position and wealth for these ‘representatives of the people’, who had leaned on the trusting support and hard work of so many well wishers for their people and for justice, to hop over and grab their chance to benefit from betrayal.

It is thanks to these bought defectors that PN can even begin to attempt to show a slither of a ‘majority’, together with the help of the party they have campaigned against for years on behalf of the Dayak in Sarawak, namely the components of GPS under Taib Mahmud.

The betrayal happened in the normal way. For years Azmin Ali has been quietly feeding these ‘champions of the Dayak’ with cash – and lies about his own boss, whom he planned to undermine along with anyone else who gets in the way of his own ambition.

These Dayak traitors have now become excited at the thought of being the ‘right hand men’ of the man who they still hope can become prime minister (fat chance on both fronts). After all, Azmin today postured in the parliament as the ‘Number 2′ behind a man whose political life hangs by a thread.

And for such prospects all thought or concern for the health, rights and prosperity of their own people – those who entrusted them to represent them – has flown out of the window once more. These MPs have shown themselves willing to use the sacred trust placed in them as mere bargaining chips for their own advancement – a vote that can be bought and sold.

It has happened many times before and Azmin knew his targets well. This has been the sad story of a state and its people, who deserved so much better from their leaders.

*Note: It has been clarified by Bersatu’s Masir Kujat (Sri Aman) that he had been driven to sit on the PN side of the house by organisers in order to help give the impression that PN has a majority. However, he remains with the ‘opposition’. Former Sarawak PKR leader Baru Bian has settled for being an ‘independent’. 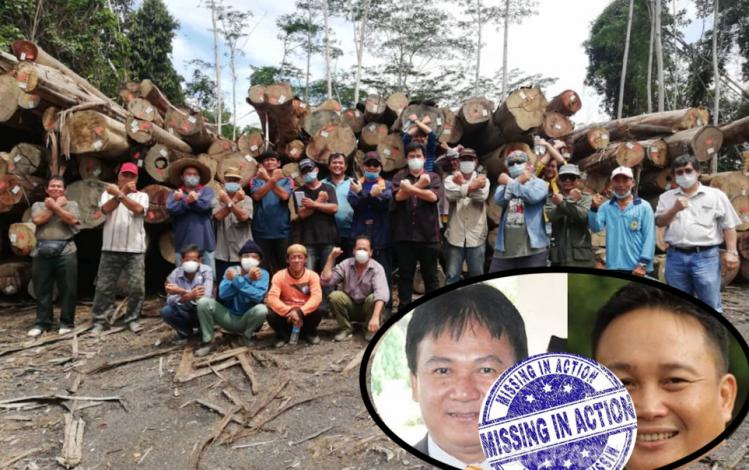 Deserted once more by their chosen representatives – the two MPs have abandoned their people, seen here today continuing to bravely campaign against GPS/PN-backed logging by Shin Yang in Long Bemang Tutoh