Najib Races Plans Into Action To Get Off The Hook?

The moves to get charges dropped against UMNO’s warlords appear to have moved into urgent top gear – is this a sign that the coup coalition fears time may be running out?

Yesterday the former AG Apandi (who in 2016 declared that the 1MDB investigation proved no evidence of wrongdoing whilst waving the incriminating evidence for all to see) was once more put to work seeking to allege the prosecutor in Najib’s 1MDB trial was compromised.

Now, it has emerged, Najib’s allies immediately headed down to the police station reporting alleged ‘treason’ against former PM Mahathir Mohamad in connection with the issue! 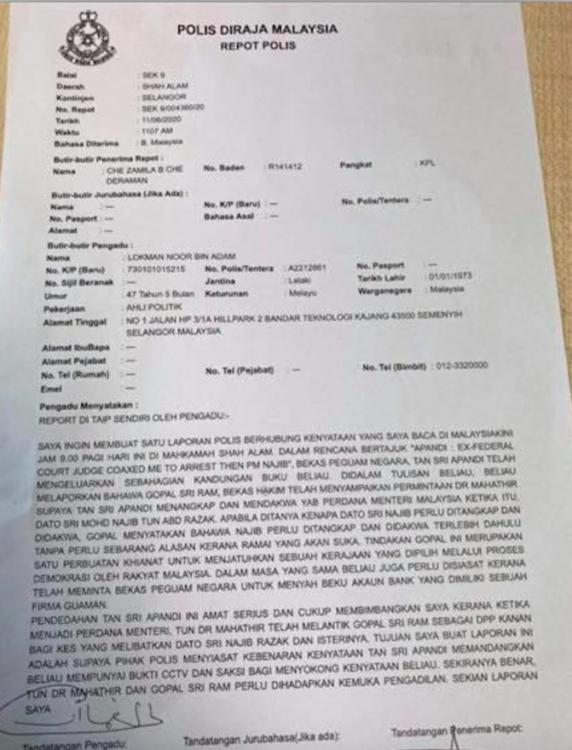 Tactic to excuse charges being dropped

After years of silence on such matters Apandi made his surprise intervention claiming that the prosecutor leading the case against Najib in the 1MDB trial, Gopal Sri Ram, was somehow compromised because, according to Apandi, Sri Ram asked him whilst he was Attorney General to proceed against Najib over 1MDB back before the GE14 election.

In short, it appears that Sri Ram, a former federal judge, had advised Apandi to do his job.

It may seem a stretch, but the coup conspirators need some sort of fig leaf to excuse evident plans to use the hijacking of the Malaysian government to drop the multiple charges of theft against Najib and fellow UMNO warlords and it seems they have chosen this.

Naturally, they have made their attack as aggressive as possible suggesting that it is Mahathir and Sri Ram* who should be jailed, not the man who accepted stolen billions of public money into his private bank accounts.

According to the police report, placed by UMNO Supreme Council Member Lokman Adam (who has been charged with contempt for threatening witnesses at Najib’s trial):

“The previous AG Tan Sri Apandi revealed a part of his book that Gopal Sri Ram, a retired Judge, had passed on Dr Mahathir’s request that Apandi arrest and charge Najib, the PM at that time. When asked why Najib had to be arrested and charged, Gopal replied that this was to be done for no reason as many people would like it. The actions of Gopal were treacherous because they were tantamount to bringing down a legitimate government.

Apandi’s revelations are serious and worry me because as soon as Dr. Mahathir became PM, he appointed Gopal Sri Ram as the prosecutor involving the cases of Najib and Rosmah. The purpose of this report is to enable the police to investigate the truth of Apandi’s statement in view of the fact that he has CCTV coverage as proof and also witnesses in support. If true, Dr, Mahathir and Gopal Sri Ram have to face justice.” [English translation]

This may seem ridiculous, however Najib’s artful lawyers will doubtless concoct a tale of prejudice over which they plan to troop into their newly appointed AGs office to demand charges be dropped. Then they will hope for relative plain sailing steered by money and connections.

Once ‘Bosku’ is back and distributing his stolen cash again, according to this script, charges can indeed be brought against all the people who earlier sought to bring him to book. Ideally, they will hope to achieve all this without calling Parliament at all (it has already been illegally prorogued under ’emergency’ declarations by the PM without a mandate).

If necessary, they will aim for a Covid election inflamed by the racial tensions they have stoked for years to cover up their criminal activities.

This move doesn’t get Najib off his SRC case, of course, which has a separate legal team or Rosmah off her cases either. However, now the ball is set rolling the legal network is already abuzz with talk of pressure being brought to bear in all directions. This was how Najib/BN operated pre-GE14 as the country knows. They think money and establishment friends will help them pull it off.

Rosmah herself has set the tone, with the angry announcements emerging yesterday that her Hermes bag collection (which she has plainly been set on getting back) has been tainted by markers made by police. They are branded forever as criminal items, which might spoil it for her if she tried to sport them publicly once more.

An independent police force would, of course, dismiss this discredited UMNO bigwig’s interventions. BN/PN bullies will press their case with Najib’s high stakes gamble to overturn the verdict of GE14 and cheat the rule of law.