Are law firms untouchable when it comes to receiving money from dubious sources?

The Foreign Agent (FARA) filings in the United States have revealed that as late as March of this year the US law firm Kobre & Kim was still accepting payments from a Thai business associate of the fugitive Malaysian Jho Low to finance PR and lobbying activities on his behalf.

Earlier in December Kobre & Kim also received a whopping payment of US$1.6 million from the Kuwaiti Sheikh Sabah Jaber Al-Mubarak Al-Hamad Al-Sabah (son of the former prime minister) whom Sarawak Report has revealed received billions of alleged Malaysian kickbacks into his accounts linked to Jho Low and his boss Najib Razak. 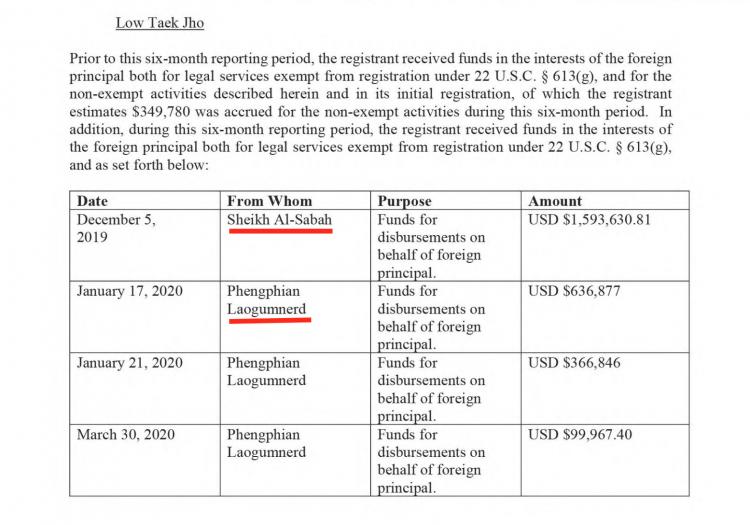 Sarawak Report first exposed Sheikh Sabah’s role in May of this year, showing how the Kuwaiti royal had informed the law firm and a number of other entities that he was willing to cover Jho Low’s bills out of “friendship”.

This was a device frequently used by Jho who used a number of supposedly wealthy titled Middle Eastern benefactors to cover payments he could not explain himself. Indeed, Najib Razak has also claimed that US$681 million paid into his own account before GE13 was a gift from a Saudi Royal, when it fact like much of Jho’s cash it was stolen from the 1MDB development fund.

The full total paid to Kobre & Kim and for exactly what services remain unknown, since only the lobbying activities need to be publicly registered.

Person of Interest for the FBI

The law firm may have chosen to believe the money came from Sheikh Sabah out of friendship, however their equal willingness to accept payments from the Thai businessman Phengphian Laogumnerd appears even harder to ethically justify.

The reason being that the slightest research into the background of Mr Laogumnerd raises enormous red flags regarding his relationships with Jho Low.

Sarawak Report is aware that Laogumnerd has long been a person of interest in the FBI’s money laundering investigations over 1MDB and this blog first published articles about the clear links between the young Thai and the 1MDB money laundering operations as early as October 2017.

Sarawak Report’s further articles and indeed numerous other references to Laogumnerd’s clear business connections with Jho Low have appeared over the following three years and populate the internet. The close connection was also highlighted by Singapore prosecutors during its cases against BSI bank executives imprisoned over laundering 1MDB cash.

Specifically, Sarawak Report has taken trouble to detail how Laogumnerd took over the ownership of the Myla underwear company, which was one of the assets bought by Jho with stolen 1MDB cash according to the FBI. He also engaged in a number of real estate transactions, selling New York properties through New Zealand companies that were closely connected to Jho Low.

Sarawak Report has also pointed out that this frequent party pal of Jho Low had also been recently installed as the new Director/Chairman of Century Banking Corporation in Mauritius November 2016, which happened to be the offshore island’s first Islamic Bank with a number of Malaysian connections.

It is well known that Jho Low spent considerable effort trying to gain ownership of his own bank in the wake of 1MDB as he sought to launder the cash around the globe – a matter Sarawak Report has frequently reported on and which his law firm ought to have been aware about their client.

Indeed, our latest revelations on the Kuwaiti money laundering investigations into Jho Low show that large sums of money did indeed travel from the accounts managed by Sheikh Sabah in Kuwait to the very same Century Banking Corporation in Mauritius, payements the Kuwait investigators considered to be suspicious.

Therefore, whether or not Mr Laogumnerd sent a similar letter to Kobre & Kim explaining how out of “friendship” he was wanting to cover Jho Low’s continuing bills, it would surely be extraordinary if the law firm had failed as late as this year to realise that this gentleman was an identified business associate and likely accomplice of Jho Low rather than a friendly benefactor.