You have to hand it to the Malaysian political mafia, also known as UMNO. Having robbed their own country blind and poured that money into massive vote buying at GE13, the same criminal enterprise has now managed to achieve additional multi-billion dollar rewards from the fines against their co-conspirator bank to help reverse the retribution of GE14.

These fines – including the “US$3.9 billion” supposedly agreed this week by Goldman Sachs – were, of course, achieved not thanks to UMNO or any of its greedy political allies in this coup coalition, nearly all of whom have spent the past five years adamantly denying that any wrongdoing whatsoever occurred at 1MDB.

So, for them any money returned or paid in fines represents a bonus on top of the original heist, thanks to those who did the work exposing them in the first place – and a far tastier alternative to jail, where so many of them belong. Which is why few people should be surprised that this so-called deal is plainly not what it’s cracked up to be by these miscreant politicians and the bank caught out for aiding and abetting the dirty dealings they once attempted to deny.

Behind the headline US$3.9 billion (already far less than the US$9 billion that was demanded by the previous elected PH administration) is a far smaller figure that the wily dealmakers from Goldman Sachs have actually agreed to.

The nuts and bolts of the deal have yet to be made public, however the press release makes the reality clear enough. Beneath the top line in eye-catching bold text “Goldman Sachs has agreed to a total settlement of USD3.9 billion” (designed to make the headlines) reads this revealing explanation:

“The settlement includes a cash payment of USD2.5 billion and a guarantee of a full recovery value of at least USD1.4 billion in assets that are traceable to the diverted proceeds from the three bond transactions…. This settlement represents a significant increase compared to the previous offer of USD1.75 billion made by Goldman Sachs to the previous administration in 2019.” [underlines added]

What this evidently means is that Goldman Sachs has actually agreed to cough up US$2.5 billion, which is not a huge percentage more than the US$1.75 billion that the previous elected PH government flatly rejected just a few months ago.

To disguise the fact, the Coup Coalition and Goldman Sachs have included the asset recoveries separately achieved by the US Department of Justice to make to announce their ‘total’! Representatives from the DOJ were pressuring conclusion of the talks and this “guarantee” of $1.4 billion from the stolen assets already traced would appear to be their contribution.

In other words this headline figure that has dutifully been picked up by media across the globe is a deliberate misrepresentation and play on words to make it look as if the total paid by Goldman Sachs will be $3.9 billion, when in fact the “total” referred to is the far smaller $2.5 billion they have actually agreed to plus the US$1.4 billion recovered by the DOJ.

As one PH insider has pointed out:

“It’s a giveaway. Remember Goldman Sachs reserved $10 billion to cover settlements in this case in 2019. Zaifrul [Minister of Finance/Palace Pal] has alleged we avoided ‘costly court cases’ But we were going to pay $250 million to get back another 3-4 billion. They [PN] just wanted to claim a win”

It is fair to say that PN also wanted the money.

This outrageous slight of hand means that Malaysians are now being expected to count the same ‘paid back’ money three times through different ‘deals’ to get separate crooks off the hook. This DOJ money was the very same pot from which Riza Aziz has of course allegedly ‘returned money’ to get his charges dropped and it is the same cash that was touted in a cash return in March.

Perhaps, when his case comes up for judgement next week the former prime minister will also offer to return the exact same money in return for a pass from jail.

Meanwhile, Goldman Sachs have achieved their real end in avoiding court, which is to get to pretend their reputation remains intact and continue to assert their farcical claim that this massive deal that was criminally sanctioned by the highest echelons of the bank merely involved “misconduct” by two “employees”:

As icing on the cake, Goldman has even offered to set its asset tracing services at ‘PM8’s free disposal to track down the rest of stolen loot around the world. In fact, as readers are only too aware, Sarawak Report has already identified the bulk of it, not that we will ask for or receive any payment for the service!

And all this took place at the end of a week where the country was absorbing the latest  shocking details about how far this regime of blatant crooks will go to try to nail down legitimacy it still doesn’t have.

It has emerged that UMNO and the PH rebels’ fixers have been offering staggering levels of bribes to Sabah MPs to betray their voters and cross sides to prop up their coup coalition – which presently enjoys a parliamentary majority of ZERO.

The brave Warisan MPs who finally spoke out about the atrocious and criminal tactics (the latest in a string of acts of political bribery) announced they have been approached up to ten times in recent weeks with staggering offers of up to RM32 million each to defect.

These are the same bunch of thieves who first stole from 1MDB and have now stolen the mandate of the electorate at GE14, and in any genuine democracy such revelations would have caused a popular storm, followed by instant arrests of the dirty tricksters behind the bid. 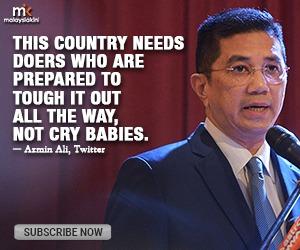 Translation – Malaysian money politics demands people who know no rules and will stop at nothing!

Instead, today Malaysia was treated to sneering by the architect of the coup, PKR renegade Azmin Ali, who chose to mock critics of the present situation as “Cry Babies”, asserting Malaysia needs leadership from people like him who are “prepared to tough it all the way”, by which he clearly means willing to do all that it takes to grab power and get rich off everybody else.

What greater crime can anyone commit that to steal the democratic rights of the people and betray the country, after all?

Thus after a window of democratic freedoms post GE14, the media is now again being attacked left right and centre and individuals picked up and charged for venting criticism on social media. A new unelected speaker has been illegally imposed on Parliament to shut up MPs also.

With the albeit diminished Goldman Sachs fine now due, the prospects for bribes and blandishments and an election awash with cash are as bright as they ever were in the ‘good old days’ of UMNO. Sarawak’s ‘frog MPs’ have sold themselves cheap as usual, forgetting that dignity, freedom and honour are beyond any price.

Nest: Having dealt with Malaysia, Goldman Sachs are now focusing on forcing through a settlement with the DOJ itself (using its power of money and the connections it buys) designed to get the bank off criminal charges and with the least possible fines before November arrives and with it the danger that their web of powerful contacts may be swept away… or at least disrupted.