Two men who are presently unable to answer questions about their vast unexplained and undeclared wealth are strutting round together asking Malaysians to applaud their riches and treat them like the Boss.

Over a period of four months, during which they have maintained an illegitimate back door coup, claiming emergency powers to unconstitutionally postpone calling parliament, they have worked with fellow political criminals to hand out the national wealth to fellow travellers in return for political support.

This was the game plan announced by their preening puppet ‘PM8′ (as recordings have exposed) whom these conspirators are happy to allow to glory in his so-called leadership role in return for getting the pardons they need and protection for their stolen billions.

Contrast the fate of the Fillon couple in France with that of smug Najib and Rosmah. The former front runner for President and his wife have this week been handed jail sentences after he was found guilty of defrauding the state of around a million euros (relative peanuts) over a period of several years in the form of claiming salaries for his wife and children for jobs they failed to actually perform.

Oh.. and yes, unlike UMNO, Riza and the rest they do have to pay the stolen money back.

Najib and Rosmah by contrast have astonished the world, together with their colleague Zahid and indeed now Azmin, by the sheer scale of their kleptocracy, but they reckon they are now emerging scot free.

With a bit of dedak down the line and a jolly dinner or two and much cynical pretence about being religious and caring about ‘Malay Supremacy’, Najib & Co. think they have the population ready to lick their boots. Meanwhile, they are preparing to sell their country out to China with Jho Low acting as the link man on all the kickbacks they obtained to cover up their crimes.

If it is any consolation, America’s embassy staff are now bootlicking also as the present incumbents of the State Department apparently seek to entice back this crooked and murderous regime as a sorry alternative to surrendering Malaysia to China like Hong Kong.

Massive payments to Trump cronies and officials have been detected in Washington, of course, and a full-scale onslaught of payments to conflicted legal firms has been undertaken by Najib, Jho Low and Goldman Sachs as they seek to get criminal charges dropped and keep their stolen money. 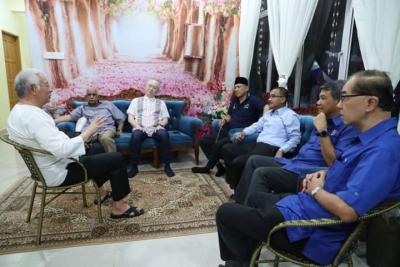 Najib and his team think its working and they have become more cheerful by the day as the PH wannabies bicker about who gets to be lead loser over a diminished band of remaining honest MPs.

They have seen it all before and how money buys Malaysian politics.

Using their long established BN playbook they have unconstitutionally sacked the Speaker of Parliament and removed the former guardian of probity placed on the Election Commission to replace him – two birds killed with one stone.

They have handed out positions that control the national economic wealth like trophies to all their political co-conspirators to plunder and abuse and they are issuing ‘projects’ for more licensed plunder to prepare their plans to bribe their voters.

Hovering on the horizon for example, yet another multi-billion ringgit ‘hospital project’ looks set to be awarded in the Johore constituency of ‘PM8′ – ‘TSMY has been briefed and agreed in principle’ boasts the architect’s presentation document.

Is that how major RM11 billion health project gets commissioned in Malaysia?  It certainly was under Najib Razak, as Sarawak Report exposed before GE14.  And, it would certainly be politically most convenient to release vast sums of public money into the frog ‘PM8’s’ own constituency as elections start to loom. Have even the pretence of due process and tendering been thrown out of the window along with every other form of good governance in this super-charged return to the super-corrupt Malaysia or can we hope for more information about the proposed project BEFORE it is announced as a done deal?

Meanwhile, back in Sarawak where so many people are not even registered to vote, the widespread lack of basic badly needed medical care results in daily tragedies of lives unnecessarily lost.

Throughout the coup Covid 19 has been put to handy use to suppress critics and after a window of media freedom under PH the backdoor regime has viciously gone after any critics.

They have used their previously enacted abusive laws that were sadly not swiftly abolished under the PH government, which simply failed to grasp the level of threat and criminality they faced as Najib used all the levers available to his remaining deep state apparatus to slow down his own criminal trial whilst the plan to overturn the GE14 result was put into play by buying up political ‘frogs’. Sadly, so many of those frogs came from Sarawak, the state that has suffered most from so much corruption.

So it is that a laughable case which could slam a legendary free media editor in jail for years (on the grounds of some random comment by a reader at the end of an article) has ripped through the court system like greased lightening in less than a month.

Meanwhile, Najib’s outrageous thefts of billions have taken more than two years to start to reach the beginning of a conclusion. He reckons he is now on the brink of forcing his own exoneration – after all, how can this coup coalition with its tiny, insecure majority not comply with Najib’s demand to be let off the hook on all his crimes?

Even as the evidence pours out daily from the courts about gross theft and abuse by all these politicians, they seem certain that people are not listening, do not understand or don not care. A Netflix documentary (Dirty Money) made fun of how despite the gross crimes and charges Najib faces, he makes no secret of living luxuriously and unrestrained, politicking in between his court appearances where he buys off ‘Simple Malay’ voters who sadly know no better. Najib doesn’t see the joke as he thinks it works.

Once back in power and off the hook the criminal politicians in Malaysia will seek to dismantle any future opportunities for the people to ever vote them out again.  They have adopted militant racial and religious politics to disguise their abuse of their own people and their own religion.

It’s a playbook that worked for decades under BN’s growing super-corruption during more prosperous economic times. PN reckon that they need only to ramp up the money politics of BN and voters will come their way. Meanwhile, Najib is strutting around cocksure that the dedak hunters will jump onto his little train.

Such people have a very low view of their fellow Malaysians who, unlike the French for example, they believe can still be bought for a small piece of their own stolen money. They are shameless.