First it was Riza, next Musa, then Goldman Sachs: now Sarawak Report has learnt that over the past days the US$3.5 billion case against Abu Dhabi’s IPIC has been quietly put on hold as both parties have agreed to opt for a cosy negotiated deal instead.

It is the clearest indication yet that the ‘establishment’ has used Malaysia’s back-door coup for one primary purpose, which has been to get key players off the hook and restore the business grip of the UMNO cartel and a privileged elite who benefited from kickbacks and concessions.

The losers, once again, are the wider public who have seen an elected government over-turned by bribery, cash payments and strong arm tactics endorsed by a powerful clique of royal interests along with China.

Just last November, the previous Attorney General and his team under the elected PH government had won a powerful victory in the UK Court of Appeal, which ruled that the Consent Order agreed under arbitration between Najib Razak and Abu Dhabi’s IPIC should be contested in open court in the UK.

The Malaysian side was seeking to recover the no less than US$3.5 billion that had been paid by 1MDB to the IPIC subsidiary Aabar following this consent order, which they said was fraudulently agreed to by Najib under the secret arbitration process as he desperately sought to cover up the thefts from 1MDB.

Aabar had earlier signed a bogus ‘guarantee’ for 1MDB’s mega-bond issues engineered by Goldman Sachs, which Abu Dhabi eventually agreed to honour but only in return for getting all the money back plus interest from Malaysia’s Ministry of Finance – all of which was agreed to under the consent order. 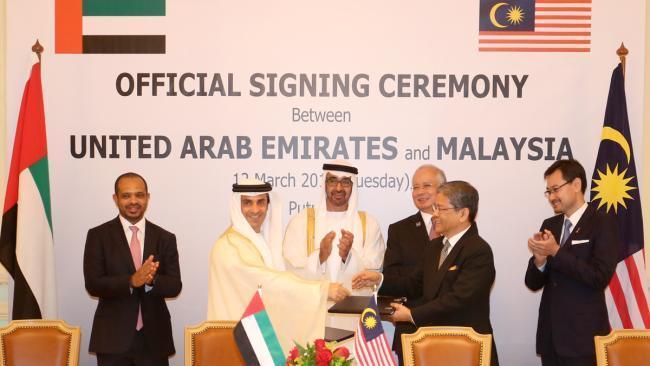 Collusion and collaboration? Crown Prince Mohammed (centre) signs a ‘strategic partnership’ with Najib and 1MDB in 2013 which under-pinned $6.5 billion raised in bonds by Malaysia much of which was then stolen and funnelled back to PIC bosses such as Mohamed Al Husseiny (far left) and Khadem Al Qubaisi (second left)

The Malaysian legal claim following the ejection of Najib’s government in 2018 was that the head of IPIC, Prince Mansour (owner of Man City) and his senior brother Crown Prince Mohammed (who signed the ‘strategic partnership’ that under-pinned the 1MDB bond venture in 2013) had shown themselves willing to collude and assist Najib in a cover-up of the fraud against Malaysia, instead of exposing the world’s largest theft.

Huge sums went into kickbacks for players at IPIC, including tens of millions spent on the upkeep of Sheikh Mansour’s yacht and hundreds of millions on his side-kick Khadem Al Qubaisi’s fleet of over 50 custom sports cars, business ventures and major property portfolios in France and the US – all first exposed by Sarawak Report.

Malaysia’s claim that Abu Dhabi had (like Goldman Sachs) colluded in the fraud was regarded as having been significantly strengthened after a stunning set of recorded phone calls by Najib was released by the former head of the MACC under the PH government, shortly before the backdoor coup moved into effect.

On January 8th, MACC boss Latifah Koya made public the recordings which included a series of discussions between Najib and Crown Prince Mohammed that appeared to have taken place on July 21st 2016, which was the day after the US Department of Justice had published the money trails detailing the thefts from 1MDB.

Those DOJ court filing had torpedoed Najib’s previous excuses about money being lent by Arab Kings and indeed Aabar executives to explain the funding of his family ventures such as the movie Wolf of Wall Street produced by “my son” Riza Aziz*.

In the call Najib is heard begging the Abu Dhabi Crown Prince Mohammed to help him out by pretending that his younger brother Sheikh Mansour (head of Abu Dhabi sovereign wealth fund IPIC) had lent the money to Riza on the basis that the scandal was “embarrassing for both countries” and might harm people dear to the Crown Prince.

The Crown Prince replied he understood and would do his best to help.

In fact, Abu Dhabi royals stepped back from getting involved in Riza’s impossible exposure over in Hollywood, but IPIC/Aabar’s bail outs of 1MDB continued along with the later ‘fraudulent’ arbitration agreement that forced Malaysia to pay all the money back to Abu Dhabi along with interest.

“Najib: Good, family is well here. Of course, we are experiencing a bit of dark cloud as a result of yesterday’s announcement by the Department of Justice.

Mohammed: Okay. Can I call you back in about three hours or four hours?….

Mohammed: Mr Prime Minister, I have consulted my guys here and I’m fine with Sunday but the catch is (inaudible)… It will be unproductive for you and me (to meet), so I try to find another solution.  Mr Prime Minister, Khaldoon has the full authority from me. I really genuinely want to find a solution to this problem.

Mohammed: I think it is very important that somebody meets you. (Inaudible) is fine with you and fine with us, I think we should go for it. I don’t want to push this anymore, it is in our interest, Mr Prime Minister, to solve it.

Najib: Yes, it is our mutual interest, Your Highness. So you don’t think I should fly over? Do you think people will know about it?….. “[read the full recording]

Tough Tactics Were Delivering For Malaysia

According to Malaysia’s court case, the outcome of the above discussions and subsequent cover-up cost Malaysian taxpayers US$3.5 billion more than if Abu Dhabi had, for example, reported the fraudulent activities of the Malaysian prime minister.

When the PH appointed Attorney General Tommy Thomas adopted his trademark aggressive approach using an open court case to pressure for a fair settlement for Malaysia,  Abu Dhabi had first sought to keep the matter out of the public eye and got a UK High Court to agree to place the matter back into secret arbitration.

The win in the Court of Appeal against that decision was therefore a vital victory for Malaysia, placing the new Ministry of Finance (applicant in the case) in pole position to put pressure on Abu Dhabi side to settle satisfactorily or see all their dirty linen, including the above call by its most powerful prince, splashed all over court and the London media.

However, as Sarawak Report has now learned, behind the scenes the PN government has now covertly done a deal, just as it did with Goldman Sachs, that promises to let off the perpetrators with a relative slap on the wrist at the cost of Malaysia’s tax paying public.

Leading the initiative to save embarrassment to foreign royals and UMNO warlords alike, Sarawak Report is informed, is the new backdoor Foreign Minister, Hishamuddin Hussein, Najib’s cousin (and a key post-election collaborator from the start of the PKR defector Azmin Ali). 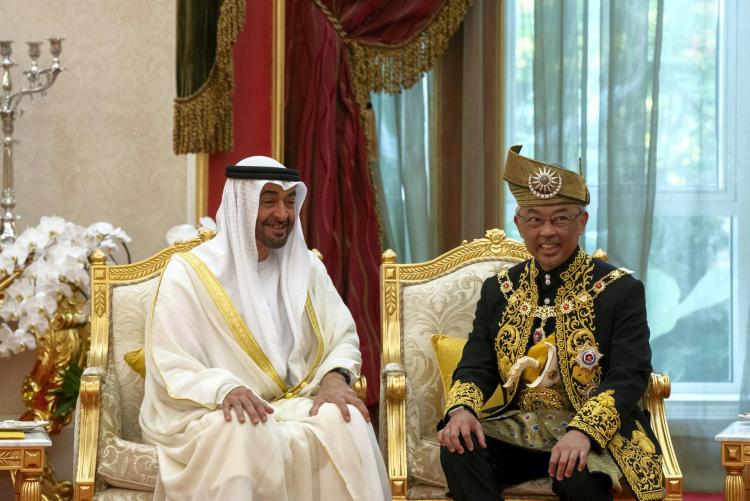 What’s a billion or three of other people’s money between close friends?  Crown Prince Mohammed of Abu Dhabi attended the coronation of the new King of Malaysia last year and the countries have now agreed to negotiate a settlement quietly out of court

However, the crucial player in these negotiations from the Malaysian side, we understand, is in fact the present King of Malaysia, who is not only Najib’s home head of state in Pahang (and a close family ally) but also counts himself as a longstanding close friend of Crown Prince Mohammed who personally attended in coronation in KL last year. 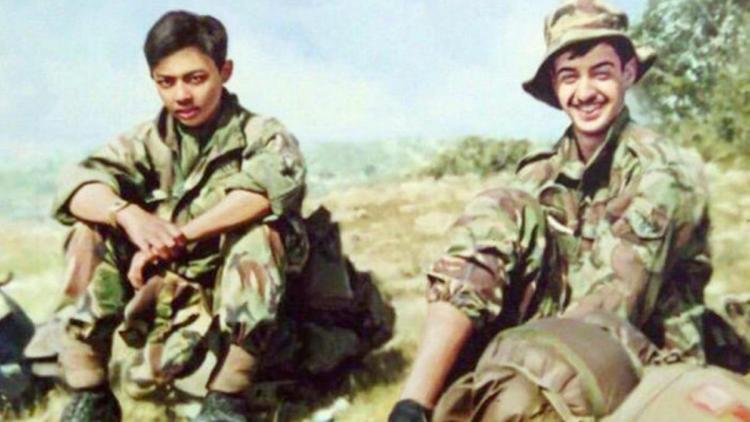 After all the two attended Sandhurst Military college together in 1979, where they are known to have forged a close friendship.

“Abu Dhabi had taken the step to challenge the Appeal Court ruling right up to the Supreme Court in the UK to continue to attempt to avoid this case being tried in open court. However, in the past days both sides have requested that proceedings be adjourned as they are willing to reach a settlement”

An informed insider has revealed to Sarawak Report.

The latest development signals only too clearly who is running Malaysia and why. The unelected banker (and also known close friend of the King) who has been appointed as Finance Minister by PN will have the prospect of even less money coming back to the public purse to assist the nation as it deals with the fall out from Covid and financial crash.

And again, the criminals largely responsible for the mess are one by one escaping punishment as PN gets busy with its reversals of the elected government’s attempts to bring justice over 1MDB.