First It Was Orphans - Now Najib Claims He "GAVE To Felda Settlers"?!

In what other country would a convicted mega-felon be allowed to swan around in a public funded cavalcade to campaign on behalf of a major political party, which has failed to expel him over the world’s most enormous recorded theft of public money?

And where else would prosecutors allow the same joker off days in court in order for him to be able to attend parliament to prevent a mega-finance bill from failing?  It duly ‘passed’ today with just half of MPs in favour and is aimed in large part to prop up a whole batch of new ministries created to buy MPs over to the new backdoor government.

As Malaysians are all too painfully aware, this backdoor coup led by ‘PM8′ is now dependent on the support of a swathe of charged and convicted criminals who are comporting themselves as such – first among them Najib Razak.

Denial is a key characteristic of fraudsters and felons, whether due to self-delusion, cynical deception or a likely combination of both. And Najib was in full flow denial on the election stump this weekend.

First, he explained he had only ‘accepted’ the money (that he still claims he never requested into his accounts) in order to spend it on orphans and good works …. well he admitted a ‘teeny fraction’ went astray, since we know millions went on diamonds for his wife, anti-aging treatments, home furnishings, holidays and fancy watches as gifts.  He says it was just 1.0% and the rest was for those orphans.

Intriguingly, no known orphan has yet stepped forward to thank him for all his help.

Next on the Slim by-election stomp, Najib went on to lecture Felda settlers in Trolak Selatan to whom he claimed “I gave RM15,000” in apparent reference to the cash incentive Najib employed to get Felda farmers to agree to his disastrous stock market flotation of their once profitable cooperative back in 2012 . Does he think the farming folk are as simple, vulnerable and unable to work things out as abandoned children?

Najib nonetheless commented that he thought the Felda homes looked pretty good out of the improvement ‘he’ had provided.  So, perhaps he would be willing to swap for some modest Felda quarters his own grand, gilt decorated mansion in Central KL? Both beat a cell in Sungai Buloh doubtless.

Najib did NOT give Felda Settlers RM15,000 – He Stole Their Birthright And Their Land

It appears to remain to Sarawak Report to point out that for all his bold rhetoric Najib Razak did not “give” Felda Settlers RM15,000. He in fact orchestrated the vast theft of their birthright worth billions of ringgit by forcing them out of their cooperative lands in exchange for that money, which he then flogged on the stock market.

The theft Felda from the poor landowners of Malaysia ranks every bit as terrible and grotesque a crime as his later heist at 1MDB and has left these folk with a bunch of near worthless shares, the company having been looted by all Najib’s cronies from the moment it raised some $5 billion from the second largest ever floatation of its time – a sum raised mainly thanks to Najib forcing public owned Malaysian companies to buy into the inflated offer.

So, let us be clear. Before Najib showed up with his glinting teeth and promises to ‘make every Felda landowner a wealthy shareholder (remember that promise, back in 2012?) these settlers had been blessed with a solid stake in a farming cooperative that had been bequeathed on them by Najib’s predecessor (Mahathir) to give them a good living they could pass on to their children.

In a staggering abuse of his trusted role as the defender of these Malay folk Najib bullied and enticed them out of that solid ownership, despite the wise misgivings of many Felda leaders, using the bribe of the RM15,000 per family to clinch the deal.

That RM15,000 was not ‘given’ to them by Najib, of course. It was passed back to them as part of the proceeds from the stock market takeover of their lands – the pay-off amounted to 1/5 of the money raised. The rest of the $5 billion floatation windfall passed under the control of the Najib appointed board of the new company who managed, almost in the twinkling of an eye to ‘waste’ nearly all of it on absurd loss making real estate ventures across the globe.

Given the disastrous losses and mismanagement the value of the shares in Felda therefore crashed under Najib’s government from the pumped up price of RM5.46 at the time of the floatation to what it is now – a mere RM1.13.

As the incoming Chairman Isa Samad was forced to admit back in February 2017 some RM4.3 billion had ‘gone missing’ on daft (or shall we admit just plain corrupt) investments.

Corruption At The Expense Of Felda Farmers

Even at the time of the IPO insiders were admitting to the financial press that at least a quarter of the investment was going into the pockets of prime minister/finance minister Najib’s ‘family’ and cronies – they told Reuters that it was so blatant it was embarrassing”:

Felda’s listing plans were initially met with resistance from the farmers who partly owned the firm and feared the loss of control of an asset they had invested in for generations.
The government, a key shareholder in the firm via state-linked funds, sweetened the deal with windfall payments totaling nearly $5,000 each generated from the a fifth of the IPO proceeds.
To keep the farmers happy, government-linked funds and the domestic pension fund, which accounted for part of the institutional tranche, made a rush for the stock during the book-building process.
“This Felda IPO is an embarrassment,” said an official with a Malaysian bank-backed fund management firm. “About 23 percent of the book was allocated to ‘friends and family’, all at the expense of legitimate investors with potential synergies.” [Reuters 2012]

So, with Najib’s ‘friends and family’ were getting 23% of the book and the entire Felda community getting only 20%?  Who do we think was helping who and who really got rich from Najib’s get rich scheme?

For the price of a car that will now be worthless the Felda farmers were cheated of all they had.

It is thanks to Najib’s disastrous plunder of Felda and all the public funds that were forced to invest in the disgraceful sham of an IPO – second in size only to that of Apple – that these Malay farmers no longer have a say in the management of lands where they sweat and toil.

So, let’s take a closer look at those shares that Najib arranged for these Felda former landowners to swap for the land they work on. Under his ‘get rich quick deal’ each Felda settler was allowed to borrow up to RM3,640 to buy 800 Felda Global Venture shares at a princely RM4.55 each (8 years on they are currently worth just RM1.1). 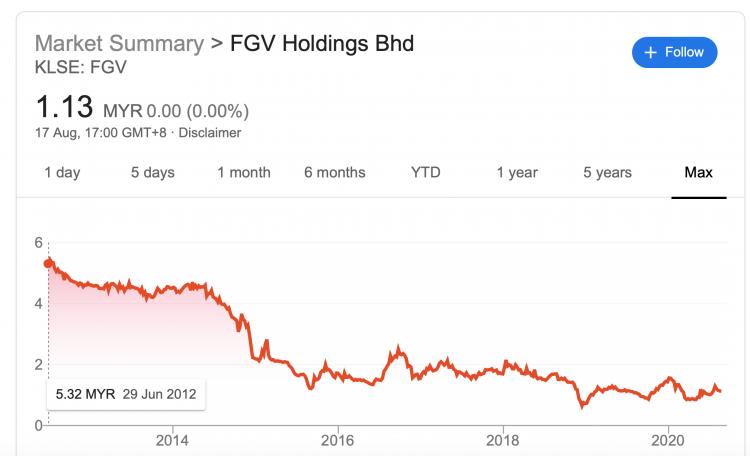 Lousey investment from a company that was plundered out of billions

Najib wasn’t giving the settlers money to buy these shares, they had to borrow it and pay interest. So take that off the RM15,000 that he DIDN’T give them. According to the Star in July 2017 when the government was forced in to take up 50% of the cost of the disastrous failure:

Those 800 shares are now worth RM904 a fraction of what the settlers had to pay in loan and interest.

So, next time Najib goes down to Felda communities to tell them he “gave them RM15,000″ (in between helping orphans) out of the kindness of his heart and generosity of his spirit these folk should remember that they are not innocent and trusting orphans they are grown adults, who have been horribly and outrageously cheated by a man who abused his office and lied to get their votes.

The courts have just put the label on him too and there is more to come. Time to greet ‘Bossku’ with the rotten tomatoes he deserves