An ugly battle is brewing in Baram between Sarawak’s notorious logging giant Samling and local communities who have discovered that during the cover of the Covid crisis the company has been slipped a ‘Forest Management Permit’ to log 148,000 hectares of native lands.

The campaign group Save Rivers has sounded the alarm on behalf of these vulnerable native groups and their precious landscape. The NGO exposed how Samling in its pitch to gain the accreditation for the area – and crucially to gull foreign buyers – has claimed it has majority community support to log their lands.

After Sarawak Report related Save Rivers’ findings that the logging company has merely got up to its usual notorious tactics (performed the world over for decades) of framing bogus consultations and collaboration with communities Samling issued a furious rebuttal of several pages, which sent to several parties but not Sarawak Report itself. 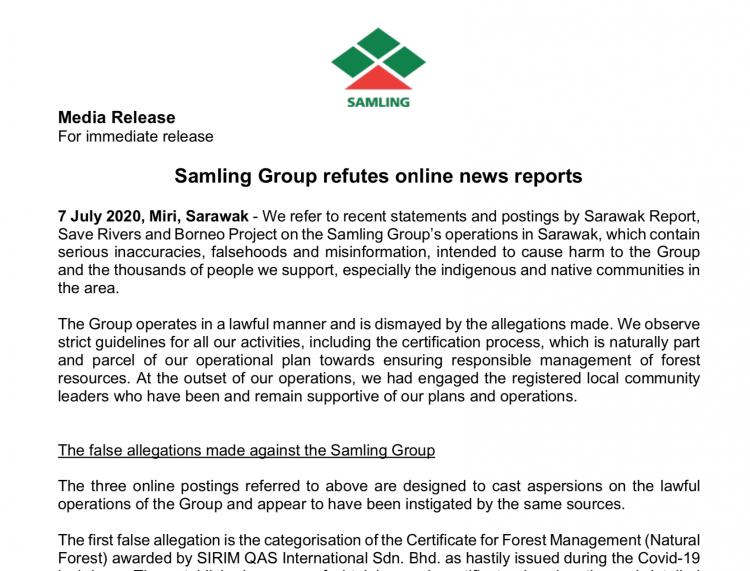 The failure to reply directly to Sarawak Report might be owing to the fact that the claims and rebuttals made in this lengthy and self-justifying press release are highly questionable. This includes their first complaint that the company was unfairly accused of being “hastily” issued with their ‘Forest Management’ Certificate in the middle of Covid.

However, the certificate was introduced in the middle of lockdown on April 12th.  And Sarawak Report did not use the term “hastily”.

The point is, whether or not the company had been quietly working to obtain this massive and lucrative concession over a considerable period (which it plainly had), the issuing of the permit hit the majority of the people of the region as a horrible surprise in the middle of Covid. That is according to several leaders, who complained to Save Rivers and Sarawak Report.

Of course, certain people will have been induced to sign various forms. It’s how Samling and the other forest raiders have operated over several years. However, the evidence is that communities have not been thoroughly and honestly consulted as they claim (the company’s track record speaks amply for itself). Since there is no evident benefit to the local people from this assault on their scarce remaining lands why should they want the logging?

So, whom should onlookers believe?  Samling says:

“The allegation that the certification was awarded without the knowledge of local communities in the area is misleading. The Group had followed all due processes to obtain certification, which is naturally part and parcel of our operational plans towards ensuring the responsible management of forest resources. At the outset of operations, Samling had engaged with the local community leaders, who had been duly appointed by the Sarawak state government and registered with the District Office. [See the Samling Press Release]

Whereas John Jau Sigau, the community spokesman for the Jamok people of Long Tungan and Long Siut in the area, says:

“SIRIM and MTCC acknowledged the shortcomings in Samling’s consultation and information policy during the Gerenai certification process. But no one takes the responsibility for it. We have clearly shown that our communities were not consulted, why can no one take action now and revoke the certificate? Samling clearly failed to follow requirements of the MTCS such as obtaining free, prior and informed consent. So, how can they keep the certificate? This renders the MTCS certificate meaningless.”
[Save Rivers]

Samling has expressed anger and outrage that Sarawak Report and others have reported these complaints when they and the Malaysian Timber Council should be addressing the concerns.

Who is David Marsden?

In the past days the company issued another rebuff to protesting locals, as revealed by Save Rivers in a recent further complaint about the dismissive treatment of community representatives when they came to Miri on the invitation of Samling to discuss their concerns. People who ought to have contributed* did not, say Save Rivers.

Observing the proceedings but refusing to answer any of the questions was a key character behind the Samling project, the British Forest expert David Marsden, now employed as the company’s Chief Forester.

Prior to taking the direct job with Samling, he ran a lucrative consultancy named Anderson & Marsden (Forestry Consultants Ltd) advising Samling and many other logging concerns in Sarawak over several decades, say those within the industry.

The local people wanted to hear from Mr Marsden, but he refused to speak at the crucial meeting, despite being the author of several key documents outlining the company’s strategy and bid for permissions such as this one and acting as the key contact person for the certification agency Sirim Qas on behalf of the company:

Angry locals say Marsden is a key decision maker at Samling, plainly advising the company where to log and how to present its applications for certification. Yet, when they have written to him with questions and concerns he has rebuffed their complaints, telling them to address their issues elsewhere. 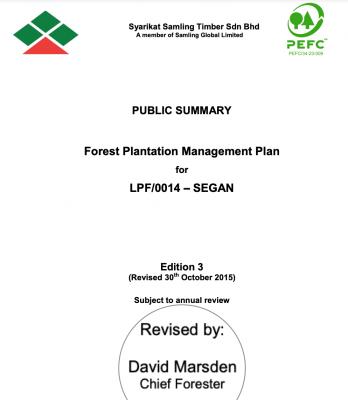 “Because of this curt and dismissive response, communities were keen to speak with Mr Marsden at the briefing last week, but he was never introduced during the meeting.

His lack of participation in the event raised a lot of questions with the community, as he was aware of the complaints made.

No representatives from the Forest Management Unit (FMU) were present during the questions and answers session, highlighting that Samling is not ready to face the community and the seminar was just a facade to fulfil their corporate obligations.

Peter Kallang, speaking on behalf of JOAS, questioned whether Samling really understood what Free, Prior and Informed Consent (FPIC) means in the context of consulting indigenous communities. “If you are only visiting the villages now, with only a few people there, that could not be considered as majority consent.” [Save Rivers]

Sarawak Report has researched David Marsden and found the 78 year old has a surprising history based around his lifelong career as a consultant to the major logging companies responsible for destroying the world’s oldest rainforests in East Malaysia.

A trained forester he was married for several years to one of Britain’s most famous conservationists, Stella Brewer (now deceased) who was decorated for her work helping chimpanzees in Africa.

Yet, although he may continue to bask in that association it appears that this apparent ‘tree lover’, who ran his consultancy in partnership with the distinguished conservator of forests in Brunei, Rob Anderson, has been involved in destroying habitat for animals and people in East Malaysia and elsewhere since the early 1970s.

Anderson did much to save the Brunei Jungle working for the Sultans, but industry insiders say that over the border Marsden operated the Anderson & Marsden Consultancy on behalf of the forest industry in Sarawak, assisting companies like Samling in identifying where precious timber could be located and best extracted from Sarawak.

He also assisted Samling when it expanded its devastating (and illegal) logging and plantation operations into Papua New Guinea, say those in the know who spoke in confidence to Sarawak Report. After years of this lucrative work the professed conservation expert took a full-time position as the company’s Chief Forester managing its logging and plantations.

It is a job that would in principle have brought Marsden bring into considerable contact with the communities of the regions he is seeking to mow down.

However, they are right to suspect he regards them with disdain. An associate who wishes to remain anonymous has told Sarawak Report:

“He derides the concept of native rights. He says they have no rights and should clear out of the forest as they are getting in the way of the development of the state. His attitude is that he loves trees, but if he didn’t take the profit cutting them all down then someone else would”.

One can see why Samling’s money men have been keen to engage the pragmatic services of the British trained conservation expert and supposed environmentalist to help them make more money and to pitch their ‘consultation’ claims to gain certifications.

However, the people of Baram are right to protest his haughty and dismissive attitude towards them. His wife may have saved chimpanzees, however he has done nothing for the Orang Utan, Proboscis Monkeys and many other endangered species in East Malaysia, let alone its native people in the course of his lucrative career.

Save Rivers has started a petition to ‘Stop The Chop’ by Samling and is looking for supporters to sign it.

Meanwhile, David Marsden did not immediately answer our request for comment on our questions about the complaints against him and we will update on any reply.

*Earlier the article suggested Marsden was absent altogether from the meeting.