It is clear, almost a year after the Malaysian coup in March, there is now a plan to sideline Parliament permanently as a significant (let alone supreme) player in the country’s government: the objective being to restore the ‘good old ways’ where representation was mere window dressing and power-mongers fought over the spoils of office.

The 2021 budget, which the backdoor administration sought to push through by-passing Parliament altogether, declaring an egregious and bogus ‘State of Emergency’, is the present case in point.

Propagandised, naturally, as a Covid combatting series of proposals to help the Malaysian people, it is in fact a classic kleptocratic instrument, replete with bloated, woolly allocations to non-transparent causes.

Analysts who have waded though the weighty document say it is suspiciously optimistic on the projected revenues for 2021 to make way for massive increases in spending, which are purportedly in response to Covid.  In fact, much of the cash is being directed at unspecified ‘development projects’ instead.

Public anger has already erupted over news about the slashing of medical budgets at the very time these increased spending projections in the name of Covid are being made and also over the diversions of huge sums into the revival of the UMNO government propaganda unit Jasa to push a message that doesn’t match reality. 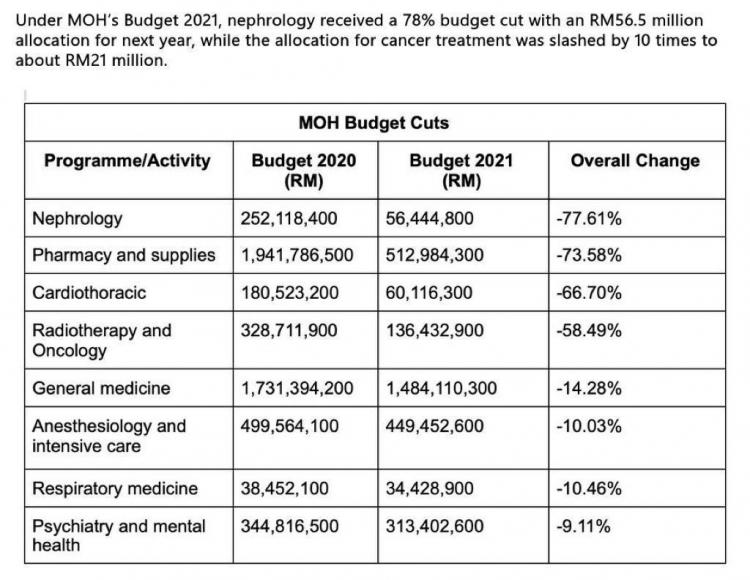 Putting People First? – anger as Code Blue reveal the details over the  slashing of medical allocations by the Ministry of Health despite the so-called ‘Covid’ budget

It has already been rightly complained of that inflated spending plans are based on impossible revenue projections at a time when the country’s economy has been hit by Covid.

To balance his budget the palace chum, who has been appointed Finance Minister to the palace-appointed Prime Minister, is projecting that next year’s corporate and individual income tax receipts will be higher than pre-Covid in 2019.

PKR figures believe the figures are over-projected by RM15 billion for corporate tax and RM10 billion for income tax. “In 2019 individual taxes raised RM39 billion, however that included a RM6 billion one-off additional revenue through the tax amnesty passed that year. Yet at a time of rising unemployment they are projecting RM42 billion for next year”, the MP observed.

The unrealistic projections raise questions over the already inflated borrowing requirement proposed in this budget (to ‘tackle Covid’) which is currently set to RM85 billion plus to match the bloated spending plans – the likelihood is that to meet the spending side of the budget much more will need to be raised on the taxpayer.

So, what are the flashing red lights in the expenditure side of this massive 2021 budget pegged at a total of RM322.5 billion?

Opposition analysts (namely the MPs who were actually elected to govern at GE14) are concerned at the blatant abuse of the ‘Covid excuse’.  The extra borrowing for next year is being raised supposedly to assist with the wage subsidies programme for those who have lost employment and to support necessary handouts to affected individuals and entities.

Typically the Malaysian government will borrow the norm RM50 billion in bond issuance, but this year the coup coalition intends to borrow RM85 billion for the year 2021 to balance its books ‘because of Covid’. That is RM35 billion more in borrowing this year, however the specified ‘Covid 19 Fund’ has only been allocated a sum of RM17 billion.

The remainder of the borrowed cash is being channelled to development expenditure for unspecified ‘development projects’ – RM18 billion of extra borrowed public money for which no adequate explanation has been given complain opposition MPs, who say the money ought to be spent on the genuine crisis needs of those suffering from Covid.

It gets worse, because altogether the so-called ‘development expenditure’ segment of the budget has been inflated to a whopping RM71 billion for largely undisclosed projects. The more normal figure is around RM50 billion, which reformers already regard as a troubling aspect of the traditional Malaysian budget allocation, because it is so non-transparent and clearly open to graft.

“It is harder to thieve from the operational and expenditure side of the budget, except in matters like procurement. However, the big corruption is always in this ‘development’budget’ and this year they are adding an extra RM21 billion to it as a form of discretionary corruption cash in the middle of Covid”

is how one observer expressed the widespread concerns about this budget. Opposition politicians are demanding the balance be restructured and for more details to be offered as to why these huge sums for ‘development’ are considered necessary at this time, since plainly the figures on which the borrowing as been calculated must exist.

And there is another bloated aspect to this budget that has raised dark suspicions amongst those attuned to practices in kleptocracy in Malaysia. Huge sums are projected to be raised next year from selling assets the document states, however no details have been given as to which assets and how they have been valued.

In 2019 the PH government sold off RM2.3 billion in government assets whereas this administration plans to raise seven times as much in one off sales that it claims will add a hefty RM14.1 billion to its ‘non-tax revenue’ for this year.

“There is troubling room for corruption in these sales given the lack of transparency generally involved in Malaysia. Unless there is proper open tendering such assets are too often sold off cheaper to cronies who then scoop the real profits in the re-sale. So we need to know exactly what they are planning to sell off and how they are valued. They have identified what they intend to sell but there is no detail or transparency in the budget.”

It means the so-called Covid budget in a lean year with catastrophic revenue concerns has none the less been padded out with tens of billions of extra ringgit of unspecified potential kleptocracy funds perfectly positioned to reward the support of the key establishment figures who have propped up a government installed by a handful of defectors representing a fraction of the electorate.

The RM17 billion allocation to actual Covid relief is a paltry sum compared to the RM71 billion development budget and the potential differential to be leached from non-transparent disposals of public assets.

This is not what electors voted for, but it is how Malaysia’s elite have got used to the country being run on their behalf. Until the removal of Najib Razak it has functioned as a classic kleptocratic middle income country where the poor and middle earning classes have been denied a fair share of development thanks to the diversion of public money to the clutch of super-wealthy political and business elites who have pulled the levers of power and engaged in ‘projects’ and ‘business’ alongside their civic roles.

The 2021 budget has all the hallmarks of a determination to return to business as usual  – a traditional crony handout bonanza based on massively inflated projections and mysterious unspecified allocations.

It has all been carried out in the name of Covid and supporting the people, naturally. This time the people are seeing through it.