Amongst those to most suffer from the impact of the Covid 19 crisis and the mismanagement of relief funds by the present backdoor coup administration in Malaysia have been the poorest and most remote native communities in Sarawak.

Almost daily, Radio Free Sarawak has covered painful stories of families hit by sickness and lockdown but unable to access the food and financial relief supposedly their due.

Yet last week during one of the vanishingly rare sittings of the local state assembly (YBs are only expected to turn up to earn their fat salaries for less than 28 days in a year, mainly to rubber stamp the budget – a format that appears now to have been eagerly adopted by the present backdoor federal government as well) there were insufficient numbers present to even make a quorum for discussion.

The sitting of the state parliament had to be abandoned because not enough YBs turned up for their four weeks of work a year. 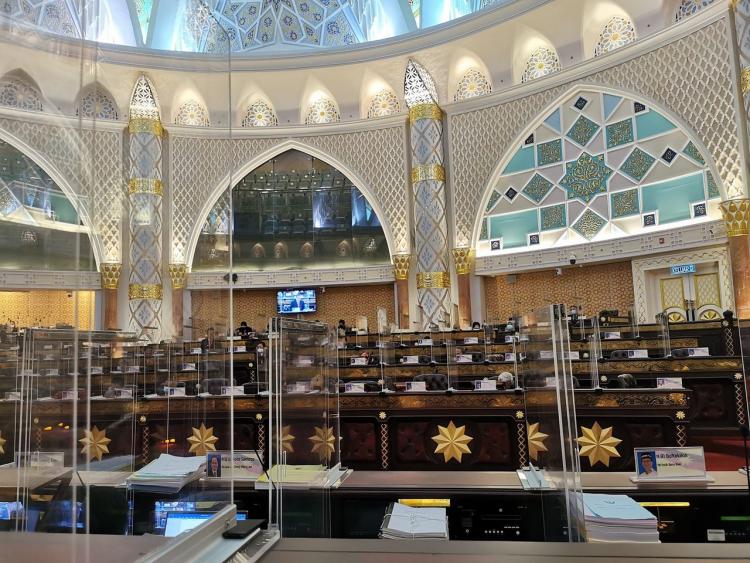 A stunning representation of the state of democracy in the State of Sarawak. Just 8 days of work to complete the sitting and scarcely any of these well-paid ‘elected representatives’ bothers to even make the quorum to discuss matters important to their state

Amongst those ‘representatives of the people’ who failed to bother to attend that day was the MP Ali Biju, who together with two other former alleged champions of reform and native rights, Willie Mongin and Jugah Muyang, was elected on a pledge to counter the crony politics of the GPS parties and BN government, which for decades has done so much harm to their own native communities.

All three had been part of the PH coalition government also committed to restoring Sarawak’s rights under the Malaysia agreement (a matter suspended under PN).

However, by last week these frog MPs were too busy either driving around in ministerial cars in KL or buttering up their new allies in PAS and UMNO as part of the PN/GPS backdoor regime to bother about such trifles as the suffering of their people owing to Covid relief mismanagement – let alone to speak up against the further planned erosions of the protection of native rights also being discussed in this rare sitting of the DUN.

It is a tragedy that these three MPs, elected with so much hope by their constituents, are directly culpable for the collapse of the coalition they had pledged to support and that these three defectors continue to provide the tiny majority which has so far sustained an ugly supremacist coup coalition of intolerant mainland parties who regard East Malaysians and their culture, rights and religion as second class.

The present unelected PM in Malaysia is entirely reliant on the votes of these ‘frog’ MPs to maintain his claim to a majority in Parliament which he has been seeking to sideline entirely by calling a bogus State of Emergency to avoid the budget vote.

The reasons for their astounding defection in defiance of the interests of their constituents in Sarawak include a mixture of misplaced loyalties, political bribery and cunning manipulation on the part of the man they consider to be their ‘leader’, namely the PKR defector Azmin Ali, now rated the most unpopular political figure in Malaysia.

The chain of events date from at least 2014, but Azmin’s relationship with East Malaysia goes back to the time he was entrusted to help organise PKR in the region by his boss, the founder and party leader Anwar Ibrahim in 2011.

It was having been appointed the leader of Selangor (thanks to support from PAS against the wife of his imprisoned boss – a woman being considered unacceptable to these bigoted allies) that Azmin Ali used the considerable ‘influence’ inherent in that position to set about building up his power-base in Sarawak just as his party leader was being locked up by the man who is now Azmin’s political ally, Najib Razak.

The PKR Sarawak leader, Baru Bian, and certain of his inner circle already resented the party leader who had appointed him to his position in the first place, owing to episodes of conflict over his quest for more autonomous management in Sarawak.

Azmin’s injection of funds into the Sarawak party, whilst Anwar was safely out of the way in jail, was plainly designed to woo these disgruntled regional figures to support his own increasingly blatant determination to wrest the leadership of PKR away from the incarcerated Anwar Ibrahim and so put himself in line to be PM.

The blandishments succeeded. Shortly after the GE14 election Baru’s right hand man Vernon Kedit was over in London bragging to Sarawak Report amongst others that the PKR folk in Kuching were ‘all Azmin’s Men’. He left it in no doubt that the PKR MPs who had been elected on the understanding they would uphold the PH manifesto and support their party leader, were in fact plotting with the number two to destabilise the party and wrest control.

Sarawak Report always advised against such folly, disloyalty and deception and urged the end to such power play in favour of putting the people and manifesto first. However, as Azmin’s disruptions continued to undermine the party it became clear that his ‘men’ in Sarawak were standing by the troublemaker.

This, even after scandals had erupted around Azmin that would have caused a leader of greater conscience to resign.

Towards the end of 2019, Sarawak Report again urged mature peacemaking upon these apparently deluded Sarawak MPs, who appeared to fail to understand that Azmin would not end up leading PH as the next prime minister but was rather be seeking to overthrow PH by joining the very opposition parties that ‘Azmin’s Men’ in Sarawak had pledged to counter at GE14 – a coalition of Malay Muslim supremacists with no time for the ‘second class’ citizens of Sarawak.

Only the PKR leader himself, Baru Bian, stepped back from the disastrous insurrection when Azmin and his side-kick Zuraida Kamaruddin finally threw in their backing for the backdoor coup. Baru has selected an alternative opposition platform in Sarawak, however the three MPs behind him in the party continued to follow Azmin, with Vernon Kedit still acting as the effective local henchman, whipping these three key votes into line and spouting Azmin’s propaganda against all critics (to the extent of courting a libel case which he lost, thus making him bankrupt).

It is well known that wiser heads in KL had, like Baru, stepped back from Azmin’s wild and selfish destruction of his own elected government, once his true intentions behind allegedly supporting Mahathir against what had been an agreed transition of power became clear at last. It was never about defending Mahathir’s right to rule, it was about over-turning the outcome of a democratic election.

In the event only a handful of the PKR MPs and leading lights, whom Azmin had boasted were under his command, did in the end defect with him to join the Muhyiddin plot. Consequently the rebellion consisted of far less MPs than had been hoped for by its leaders, resulting in the desperate present weakness of PN and the backdoor government’s persistent fear of calling Parliament at a time when the country has desperately needed strong and cohesive leadership.

That weakness has with searing irony resulted in these three Sarawak frog MPs holding a crucially important role in keeping in place a government that has set about reversing everything these gentlemen campaigned for during many years of opposition and which has blatantly accelerated the corruption and exploitation of the nation, possibly even beyond the worst excesses of the Najib era.

Which arrives us at the present situation with a corruptly bloated budget that PM8 and Azmin Ali and their PN fixer Hamzah Zainudin were so fearful of not being able to pass that they attempted to call a bogus State of Emergency and locked down all business and movement in KL on the plainly scurrilous excuse of a Covid crisis that does not exist in the capital, as everyone knows.

Struggling to inject stability into the minority government he was clearly misled into appointing in the first place, the Agong has ‘advised’ the opposition to accept this budget which involves the largest borrowing in the country’s history, using the Covid stimulus as its excuse.

However, such ‘advice’ to an already side-lined Parliament entails a constitutional over-reach by the doubtless well-intentioned Agong and the barest scrutiny has indicated that this budget, like everything else about this floundering government, is a corrupt device more intended to pay off fair-weather allies at the public expense than to support a population suffering from the economic disasters imposed by lockdown.

In this bloated hand-out budget the major RM8.6 million allocation to an ‘NGO’ set up by Zuraida Kamaruddin shortly after her exit along with Azmin Ali from PKR appears to be the relevant section when it comes to acknowledging the pivotal role of the likes of Vernon Kedit and ‘Azmin’s Men’.

Penggerak Komuniti Negara was established by Zuraida and Azmin shortly after they defected to Bersatu with their clutch of Sarawak supporters. Although ‘PKN’ claims to be a non-political organisation dedicated to some sort of worthy actions, the main Sarawak leadership posts of this hastily concocted ‘NGO’ is packed with the self-same ‘Azmin’s Men’.

Prominent amongst the office holders are Vice Chairman Vernon Kedit and MP Willie Mongin, along with assorted ex-PKR figures or their family members: 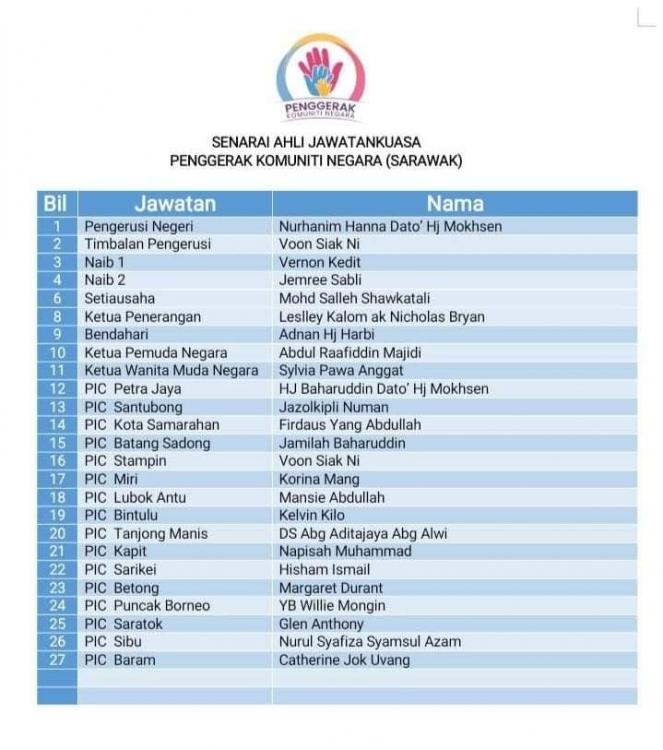 This crony budget has already managed to scandalise even the once biggest kleptocrat of them all, Najib Razak, who has rightly expressed outrage at Azmin Ali’s brazen allocation of an astounding RM85 million to re-establish the rightly abolished JASA propaganda unit with a budget several times bigger even than during the worst years of 1MDB push-back by Najib himself.

However, criticism of this bogus ‘Covid’ budget has also focused on this hefty RM8.6 million grant – issued under Zuraida’s own Housing Ministry, of course.

Anwar and others have been right to query the purpose of this one off Housing Ministry hand-out to an ‘NGO’ of little substance but packed with political allies at a time when families are being thrown out on the street and rural communities are being starved of the supplies and support they are meant to receive.

Zuraida’s people have predictably responded with threats and police reports, as opposed to proper details on how the money will be spent.

Unless there is a total rectification of this putrid state of affairs, the opposition would be entirely right to vote down this deceitful, corrupted and bloated budget that threatens the economic future of the nation and ignores the genuine crying needs of Malaysians.