It's No Secret Najib Wants To 'Fix' Zeti - So What Do The 'Documents' Tell Us?

“How can a BNM Governor not know when billions of foreign funds get into bank accounts in the name of the Prime Minister while every major transaction from abroad needs BNM approval?”

That’s the rhetorical question asked by ex-PM Najib on his Facebook today, after posting a statement of denial issued by the former Governor Zeti Akhtar Aziz in response to a week of renewed smear attacks orchestrated by his own favoured rent-a-blogger ‘RPK’.

To which one might reply, perhaps in the same way that he, as the Prime Minister in charge of 1MDB, seems to expect people to believe that he did not know that billions stolen from the fund, which happened to end up in his own accounts, weren’t a ‘donation’ from a friendly king.

Zeti’s statement categorically denies the allegations made by RPK, which are based on alleged leaked documents from the MACC, which the blogger indicates prove the Governor’s family complicitly received a chunk of the stolen 1MDB loot to the tune of $16 million.

However, the denial is not enough for the ex-PM who has continued to sit as an MP whilst appealing a damning judgement and who daily self-pities on Facebook. His complaint that Zeti must have known about his stolen money is one of a list of disbelieving challenges against her statement, in which she says “the allegations against me and my family [by RPK] are completely false and malicious”.

Indeed, the former Governor (one official whom as Prime Minister he was not in a position to personally appoint) has been a clear target of Najib Razak since the middle of 2015, when articles by his cyber-troopers started to appear labelling her as one of the ‘traitors’ behind the ‘fake news’ exposure of the world’s largest recorded theft, namely 1MDB.

We learnt during his last trial exactly why she became a target in this way.

Testifying in the SRC case, Zeti informed the court that the Prime Minister had hauled her into his office on July 3rd 2015, the very day after Sarawak Report (and the Wall Street Journal) detailed how the cash had ended up in his bloated billion dollar bank account at AmBank in KL.

The reason? He wanted her to go on the record to protect him and say he did no wrong. Zeti refused:

It plainly made Najib hopping mad that, having been asked to do so, this top independent official refused to cover for him. It clearly still rankles with him to the extent that five years later, having been convicted, he is still trying to somehow turn the blame on Zeti for telling him she did not have sufficient information to exonerate him over the $681 million that came into his personal account within two days of it being raised by 1MDB in March 2013.

The obvious truth, of course, is that at the time she was not in a position to know where the foreign cash had come from without launching an international investigation involving several countries. That would have involved casting the very suspicion on Najib that he was seeking to avoid and freezing his account.

Maybe Zeti ought to have done this.  In which case her neglect actually consisted of overly protecting Najib Razak, both in 2013 when the money was pouring in and in 2015 when investigations failed to result in what ought to have been a prosecution, rather than in failing to come to Najib’s rescue.

However, for Najib such relative inaction was plainly not enough. He considered he was entitled to more pro-active support and when he didn’t get it he and his allies sought to expose and harass Zeti, claiming in different ways that her husband and her family were hiding corrupt money.

Just one of several blogs that sprang up in August 2015 to defame Zeti was ‘The Recounter‘ (recently re-used by ‘RPK’) which specialised in vilifying the Governor her family and her deputy. 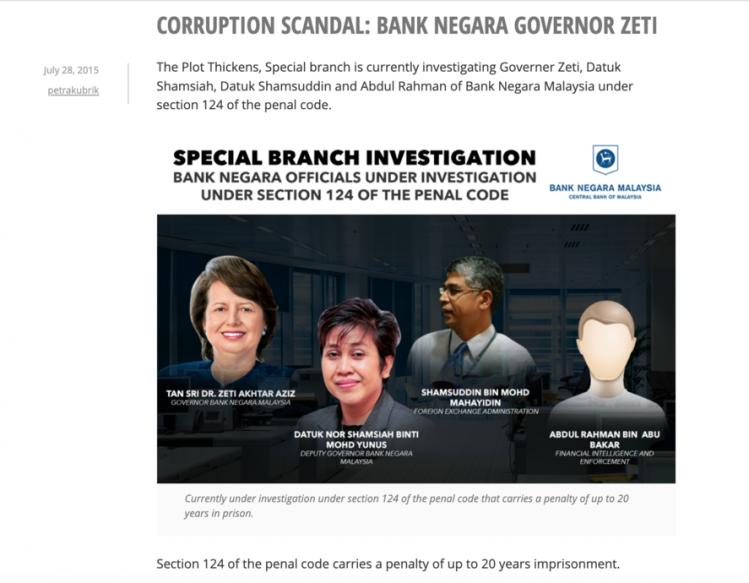 So, did the Prime Minister believe that he had perhaps in some manner previously ‘bought’ the Governor’s loyalty and had a right to expect a more enthusiastic defence than what he got?

Certainly, if the documents shown by ‘RPK’ (Najib boasts he has access to them too) are indeed genuine it is to be understood that Singapore investigators informed Zeti’s husband, Tawfiq Ayman, some time before March 2019, that money paid to himself and two sons by Jho Low a decade earlier in 2009 for the purchase of their asset management company, Ayman Capital, had come from 1MDB.

‘RPK’ publishes excerpts from an apparent Statutory Declaration made by Ayman to the Singapore Commercial Affairs Department on 13th March 2019, in which he declares the contents of two company accounts which he agrees to surrender to the authorities to be returned to 1MDB. The amount is said to total some $6 million. 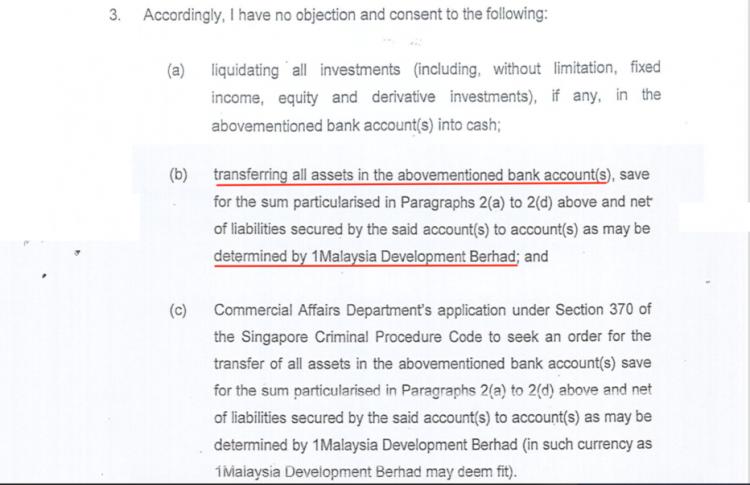 The alleged document circulated by RPK 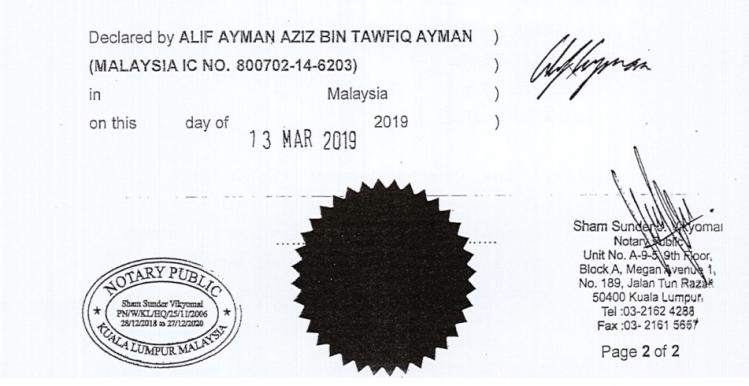 Genuine? If so, what exactly does this imply?

By way of explanation, further documents, apparently containing notes by the Singapore investigators, cite that Ayman acknowledged and explained that back in 2008/9 a total of $16 million was paid by Jho Low for the purchase of Ayman Capital through five separate payments – the payments are all from different Jho Low entities that were funded by thefts from 1MDB from the end of 2008 through 2009: 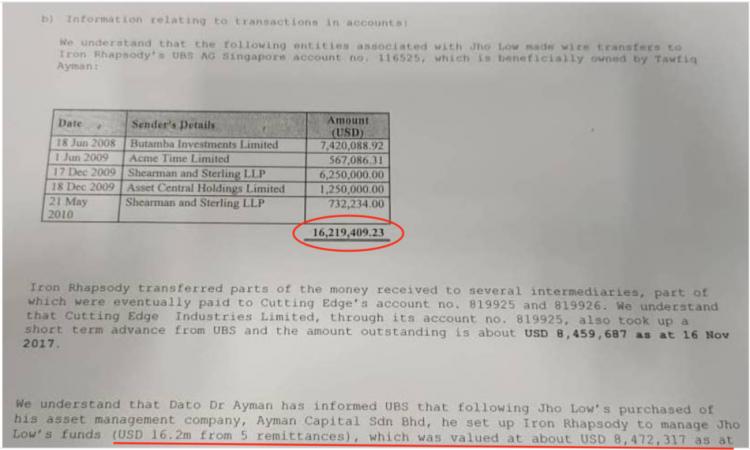 “We understand that Dato Dr Ayman has informed UBS that following Jho Low’s purchase of his asset management company, Ayman Capital Sdn Bhd, he set up Iron Rhapsody [an offshore company] to manage Jho Low’s funds (USD 16.2, from 5 remittaces), which was valued at about USD8,472,317 as at……” [alleged leaked document from the Singapore Commercial Affairs Department]

Looking at the information observers can perhaps deduce that Jho Low had expressed a willingness to pay about double the valued worth of the company, according to the assessment by the Singapore Commercial Affairs Department. Indeed, Malaysian company records from 2009 imply the company was worth only some RM2.2 million.

Alternatively, the unfinished statement from the leaked excerpt might actually relate to the value of assets remaining in Iron Rhapsody ten years later. 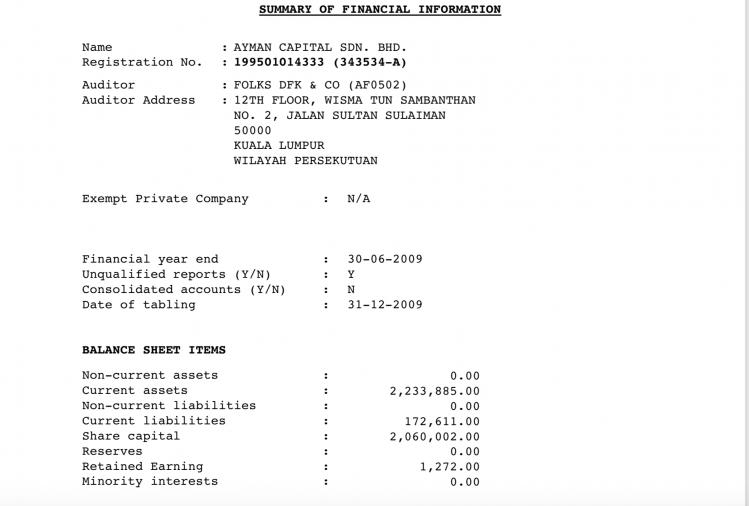 The last published accounts of Ayman Capital do not indicate a company worth USD16 million. Perhaps Jho Low reckoned on his midas touch and Ayman was contemplating his retirement.

However, the value of an asset is what the buyer is prepared to pay and the offer from Jho Low back in 2009 as he was emerging as the whizz kid in KL would seem to have been a mighty fine deal for the Governor’s husband.

It seems Ayman then shunted the money off-shore to various family owned accounts (questionable from the point of view of tax but apparently perhaps not yet illegal) from which the remaining $6 million was returned after the authorities tracked it down in 2019.

It is a scenario not dissimilar to the circumstances under which Leo DiCaprio returned his Picasso or Miranda Kerr her diamonds (both also donated by Jho Low), after being informed that they were bought with Malaysia’s stolen money.

Like these stars, and especially given his background and situation as the man married to the Governor of the Central Bank, one might think that Ayman ought to have been more cautious over Jho Low’s generous offer for the company he had run since the 1990s. Not least because records show that straight after having bought it Jho Low closed it down.

On the other hand, these payments were made in 2009, when Jho Low was still the successful star of Malaysia’s financial scene and the hot-shot advisor to prime ministers and kings, rather than the identified criminal he became when Zeti came under pressure from Najib.

In fact the relationship goes back further than most think. Jho Low had got to know this couple from his days at Wharton in the US, according to associates, having been appointed as a graduate teaching assistant to Zeti during her visiting professorship.

As was his trademark style, the entrepreneur built on that relationship to engage with the husband on business proposals, say others who also met Jho Low at the time. If so, clearly such dealings do not smack of being over-scrupulous.

Yet, the question begs, why did Jho Low decide in those early days, as he and Najib conducted their first major thefts from 1MDB, to funnel some of the stolen loot into a handsome purchase of the long-term business of the husband of the then Governor of the Central Bank, who would turn out to be the person to whom Najib would immediately turn to when he needed protection from critics of the fund?

One might consider that Ayman, DiCaprio, Kerr – and many others in Hollywood, Malaysia, the UN and elsewhere who received benefits that might have made them beholden to Jho Low – ought to have been more wary. This is so particularly given Ayman’s position as spouse to the Governor of the Central Bank.

On the other hand, it appears there was insufficient evidence of collusion or complicity to tempt the prosecutors of the various jurisdictions. And crucially, when it came to cashing in any favours Najib may have thought the deal had extracted, Zeti failed to play ball…. beyond turning that initial blind eye to all the incoming cash.

In which case, the fury and disappointment of a Prime Minister who thought Zeti would fight for him tooth and nail in return for her own unwitting share of the 1MDB loot, has been plain to see. Had she had covered for him, like his replacement AG at the time, he perhaps believes he could have closed the scandal down.

This realisation that the easy money up-fronted by Jho Low had not bought its target makes it rather easier to understand perhaps why within days of that disappointment made to order blogs started referencing Zeti’s husband and their family off-shore accounts, pointing the finger and insinuating corrupt practices.

Five years on they are still at it. The authorities seem less interested. This is what the documents appear to show, although Najib and ‘RPK’ would seek to spin it differently, of course. They appear to think that by returning money that turned out to have come from 1MDB Zeti’s husband has compromised her as opposed to showing up Najib once again for what he is.

[Sarawak Report has not requested Zeti or her family for comment and accepts that these documents promoted by Najib and his blogger ‘RPK’ may indeed turn out to be false. We only make the obvious deductions assuming these to be genuine leaks as advertised].