State Of Emergency 'To Prevent An Election' - Pandemic Or Politics?

Sadly, four people died yesterday of Covid 19 in Malaysia. The upside to this distressing loss is that the figure pales into insignificance compared to the case count and hospitalisations in more populated, cosmopolitan and free moving societies (most days last week in the US saw over 4,000 deaths).

Malaysia comes 69th out of 193 countries in terms of total deaths and rates only 136th in terms of deaths per capita, according to the respected Johns Hopkins University data.

This year only 555 people have succumbed to the virus, which is about double the number of people who die (unfortunately largely unremarked) from dengue fever which in 2019 clocked up almost the same number of cases (130,000) as Covid 19 did the following year.

Just yesterday the Prime Minister himself announced movement control orders specifically designed to counter the current threats of an upsurge without any reference to plans to suspend Parliament.

These were practical measures to counter the virus, just as in other countries similar emergency restrictions have been put before parliaments which have generally voted in favour of the short-term emergency measures that have impeded people’s normal freedoms.

However, what the Prime Minister then slapped on the country, with the backing of the King just one day later, was a very different sort of State of Emergency. It was an order to suspend the very Parliament that ought by rights to have been consulted on these very developments.

In no other democratic country has such a step been taken. To the contrary Parliaments have been called to validate the emergency health measures, not suspended.

The Prime Minister could not have been more candid about the reason. He wants to PREVENT the calling of Parliament because he admits he has lost his majority and would likely be turfed from office. The only thing that was different from when he announced the practical medical control orders the day before were the further defections from his ruling coalition.

His ‘medical’ excuse in the speech he gave yesterday was his unfounded claim that the loss of his majority would necessarily result in an election being called. Not so, of course.

His concern about an election, as he would have people believe, is only that it would spread Covid 19 in the country. Nothing to do with the fact that it would inevitably see him dumped from office, given his party represents only a vanishing fraction of the electorate.

The minority prime minister then went on to kindly reassure people that this was not a “military coup” instead, it would appear that it is a royal coup given the acquiescence of the Agong in this extraordinary ‘bending’ of the Constitution:

“The emergency proclaimed by the king is not a military coup and curfews will not be enforced,”

In order to ‘avoid elections’ the monarch has indicated he will suspend the sovereign body of Parliament till August, in defiance of the Constitution which decrees that Parliament cannot be suspended for more than six months. The Agong and his personally appointed  PM had likewise defied the Constitution last year on the same grounds, of course, and took the time to buy defectors.

This means that whilst other worse affected countries are planning on getting the pandemic under control through vaccinations within the next two to three months this unelected minority administration intends to shield itself from oversight and scrutiny and indeed from the consequences of its own lack of a legitimate majority for a further eight months. Doubtless Muhyiddin plans to spend the vast ‘Covid’ budget he forced through on once more buying back MPs. 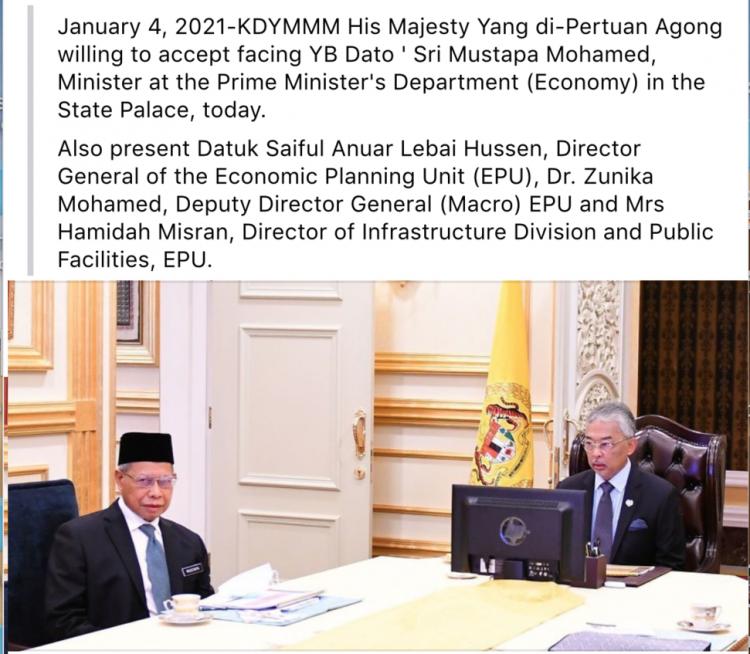 This in a country that has one of the lowest incidences of Covid 19 in the entire world and where billions have been allocated to vaccines promised for the near future.

If Malaysians are being assured that the reason for calling a political state of emergency is Covid they should be aware the rest of the world isn’t buying it and nor are Malaysia’s own non-governmental bodies and the majority who now form the political opposition in the country.

“If this is the true underlying reason, the declaration of a national emergency is not only an overkill but an abuse of Executive power that places the country at great peril in the midst of the worst health and economic crisis this country has ever faced.
We also question the capability of the Muhyiddin government in handling the pandemic and economic crisis when their legitimacy as the ruling government are being challenge almost everyday, not only from the opposition but also from within the government composition itself.

The attempt to spin an equivalence between the various medical states of emergencies that have been voted through by parliaments in countries like France and Spain and the cancelling of parliament in Malaysia through a political state of emergency has deceived few foreign observers either.

This is now ABC Australia and the Associated Press summarised the situation: 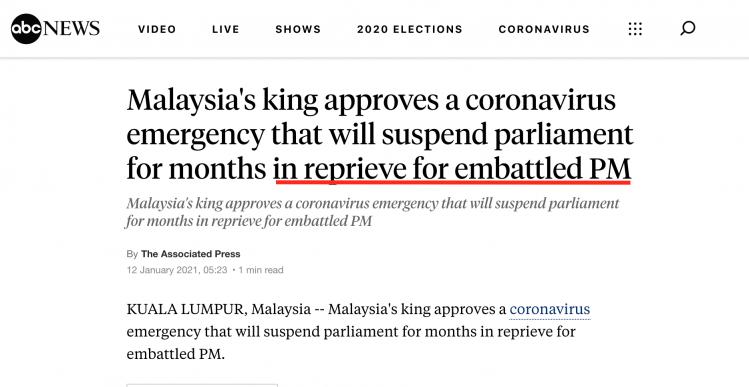 Opposition lawmakers, analysts and critics said the emergency appeared aimed at halting the collapse of Muhyiddin’s government amid threats by the United Malays National Organization, the largest party in his ruling coalition, to withdraw support to force an early general election.
“If this is the true underlying reason, the declaration of a national emergency is not only an overkill but an abuse of executive power that places the country at great peril,” according to a joint statement by activist groups and nongovernmental organizations.

The fact of the matter is that Muhyiddin doesn’t need to declare a State of Emergency to avoid an election, he can just call Parliament and acknowledge he no longer holds a majority. The King can then offer the position to the leader of a larger party who can do so.

Even were the political crisis to be such that no one leader is able to form a majority, which appears unlikely, then an election could certainly be held just as they have been in other countries taking care to mitigate the danger of infections (do not hold the irresponsible campaigning in Sabah as an example rather look to the mail in balloting, online campaigning and social distancing tactics used in various other countries).

Some have even sought to spin that this is a noble move by Muhyiddin to prevent Najib from returning as prime minister. In the event of an election the convicted Najib could not stand.

As the world’s press and plenty in Malaysia are commenting, this is no more than another blatant attempt by a prime minister who never had a mandate in the first place to cling onto power in order that his rebel cohorts can continue to suck the country dry for another eight months and stash their loot before the ‘party’ comes to an end.

Meanwhile, Sarawak Report invites the PM and all involved to review Article 150 (3) of the Constitution which makes perfectly clear that if a State of Emergency such as this is called then it must be placed before Parliament to be ratified.

To the contrary, this State of Emergency has been called for the very purpose of preventing Parliament from gaining the opportunity to hold this prime minister accountable for his actions.  Grounds for impeachment? 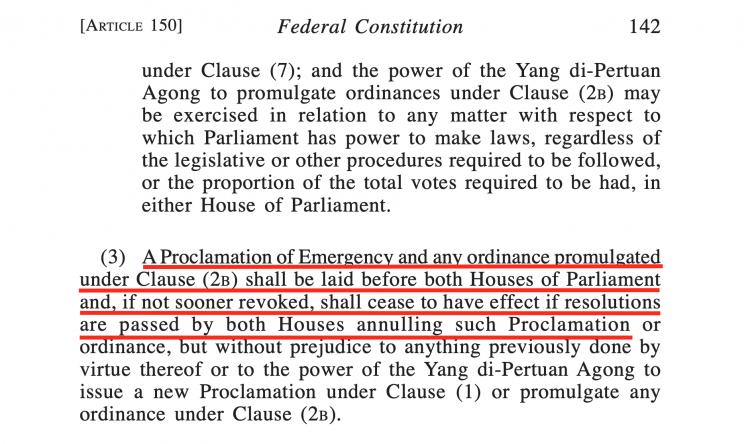 When is this State of Emergency going to be put before Parliament?