Why Did 'No Salary' Minister Negotiate Unpaid Leave?

In his announcement on Monday he produced what he said was evidence of an arrangement made with the prime minister to take ‘compassionate leave’ to join his family for a total of 55 consecutive working days from before Christmas, taking him to the end of March.

Conveniently and possibly coincidentally this coincides with the the mandatory 41 days stay per annum required by the New Zealand government of those wishing to enjoy Permanent Residence status in that country. 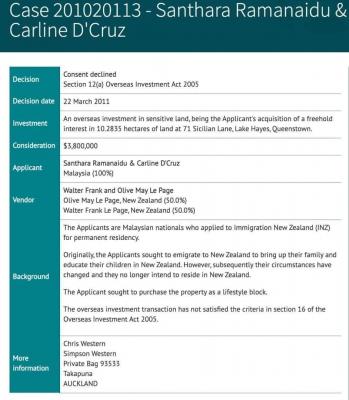 A record of seeking permanent residence and major property investment

Records confirm that the MP has in the past sought permanent residence status in New Zealand, partly by investing in a simply enormous 10,000 hectare, $3,8 million property, which eventually fell through in 2011.

So, perhaps Santhara can confirm for his constituents whether his family (who now appear to live permanently and go to school in New Zealand) are passport holders or permanent residents and whether he himself is now a permanent resident or seeking such status – and therefore obliged to spend this considerable period away each year?

Will this compassionate leave need to be an annual arrangement?

I will take no salary – Only One Ringgit!

There is another concern for constituents arising out of the new evidence provided by Edmund Santhara, which is his announcement of a suspension of his salary as a result of quietly going abroad on the grounds of ‘compassionate leave’ to support his foreign based family.

Before the election Santhara electrified voters with speeches in which he promised that he would eschew his salary and instead put all the money he earned from the public purse into a trust from which he would pay for projects to benefit his constituency.

This is what he said:

“If I win the Segamat seat my salary, my allowance, all I earn, I will put in a trust account. We will help!  I will work for One Ringgit Only!  I don’t care about the Parliament or to be a minister. I don’t need money!  This is not about money. This is a matter of our self-esteem!”  [Translated]

If this is the case, then it will have been a disappointment to those constituents to see him suspend his earnings in this manner. Since Mr Santhara is so wealthy, is he therefore willing to reassure constituents that he will ensure the trust is reimbursed from his own pocket for the period he suspended his labours and ceased to earn from the public purse?

And whilst on this subject. Sarawak Report has learned from those in a position to know that so far Mr Santhara has yet to release the details of the promised trust fund. Surely, it is now high time that he did, given all those promises he made at the election?

We request that the full details of the setting up of the fund, its income and expenditures are made fully transparent in the spirit with which the commitment was made to the electors of Segamat.

Did Minister ‘Dis’ The King? 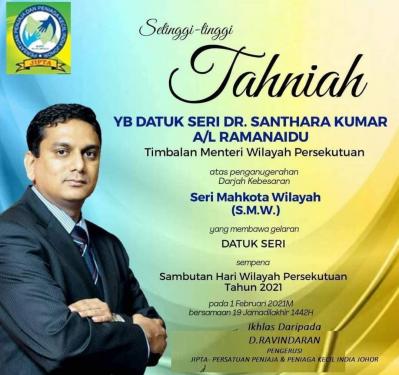 Announcement of the awarding of the title, which should have been personally received

There is a final matter being raised by disillusioned residents of Segamat with respect to their party-hopping MP.

In his statement on Monday Edmund Santhara point blank denied he had returned on Federal Territories Day, February 1st to receive the ‘Datuk Seri’ title awarded by a grateful backdoor coup government who has relied on his vital vote to uphold its razor thin majority.

Indeed, Santhara appears to be threatening to sue those who had assumed that in order to receive the title directly from the King (as custom requires) he had returned during the lockdown period and against the MCO rules established by his own government.

If the Minister has in fact therefore not received the title, his constituents would like to know if he plans to respectfully and formally hand it back to the King, whom he appears to have been caught showing some disrespect to by failing to receive the title offered?