According to The Edge newspaper the Sarawak based timber giant WTK has today issued a flat denial that it is involved in logging in the island of Papua New Guinea (PNG).

It was in response to this week’s article by Sarawak Report labelling it as one of the targets of prosecutors in the country who have vowed to audit tax evasion by logging companies.

“WTK Holdings Bhd has clarified that it is not involved in any logging operations in Papua New Guinea (PNG).”

Perhaps this is designed as a careful choice of words by WTK, sticking to the present tense on the basis that the bulk of the forest has by now been ripped out of its concessions (as in Sarawak) so that at this present point of time the 20 or so companies identified as controlled by WTK in PNG are not active or doing something else?

In which case WTK must accept that its record stands documented and angrily remembered by the people of PNG. The company should also bear in mind that historical tax evasion remains a prosecutable crime should the proposed audits identify such alleged misdeeds.

Take for example just one of these companies Vanimo Forest Products, cited as a case study by Sarawak Report during its investigation into Sarawak logging in the country in 2019.

Our extensive report Sarawak’s Logging Tycoons in Papua New Guinea remains online for all to read and outlines the ownership as detailed in the company register. 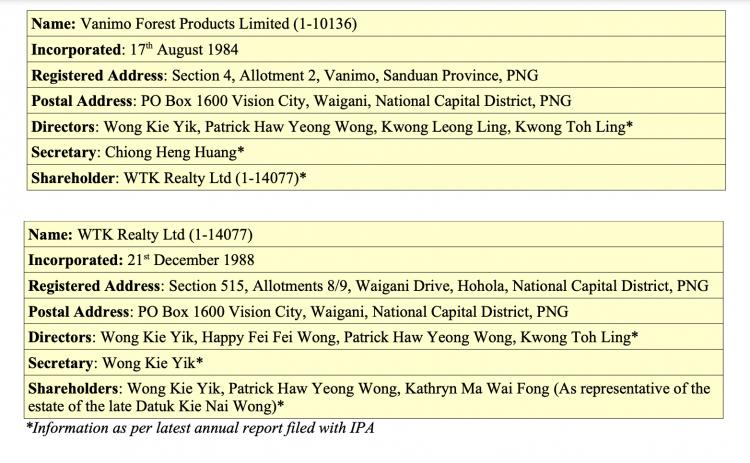 Owners are the Wong family of WTK

Indeed, in an accompanying filmed documentary Sarawak Report spoke directly with a native leader from the Vanimo region who explained how he and his community had been tricked and used to sign away the logging and plantation rights to their vast tracts of jungle by the company.

After he had unwittingly signed away their rights the representatives of WTK in PNG were so delighted with him that they ‘rewarded’ him with a holiday trip to none other than Sibu Sarawak, where he was introduced to a plainly delighted ‘Datuk Kie Wong Yik’ who ordered for him to be royally entertained back at the headquarters town of WTK.

This from the script to that film:

When we pressed Marcus, he too admitted that far from representing local communities for a purported bottom up project, his entire mission to set up the land owner company had been funded, supported and orchestrated by the massive Sarawak timber company WTK:

“Very costly yes.. transport, anythng whatever happened that we can deliver to the operating company”
– were you being paid as well?
“Not more than a thousand… maybe 300 – 200 kina… no more than that”

WTK is owned by the Sibu-based Wong family then headed by Wong Kei Yik, who is also cousin of mega-tycoon Tiong Hiew King who owns Rimbunan Hijau. Their General Manager in Vanimo was one Philip Ting:

– So back in the early 90s Philip Ting said he would assist you in completing everything?
“He assisted me financially and also travelling down and up from the national authority the company they assist.”
– They assisted you to go through the 34 stages to get the licence?
“Definitely, yes.”

And when finally Marcus succeeded in gaining official completion of the process, he says he was even flown to meet the tycoon himself in Sibu Sarawak

– You got to know the boss of the company?
“Yes that is after the signing , everything is complete and they are very very happy and they said OK we are taking you across to Malaysia”
– Where?
“To KL and then Sibu”
– Who did you meet?
“The owner of the company Mr Dato Kie Wong Yik”
– He was happy?
“Very very happy, he took care of everything and took me all over the city and I stayed almost two weeks with Malaysia Director Mr Phillip Ting”

It is not just Sarawak Report but many others have documented WTK’s involvements in PNG, although the attempt to shield behind local companies and off-shore entities has been noted, for example by the NGO Oxfam which has published a major expose into the funding of Sarawak company logging operations in PNG by Australian banks.

According to the report ‘Banking on Shaky Ground’ WTK has been identified as the ownership behind companies that have cleared over 340 thousand hectares in the country for growing oil palm:

“WTK’s specific involvement in particular SABLs [Special Agricultural Business Leases] is challenging to ascertain. The Commission of Inquiry (COI) directly names WTK subsidiaries as involved in particular SABLs which the COI found should be revoked. It also makes numerous comments as to the involvement of logging companies generally benefitting from the SABL scheme An investigative report into the SABL scheme in 2012 named WTK as operating six SABLs, with a combined area of 340,185 hectares. Given the lack of transparency in logging company interests in SABLs, as acknowledged by the COI, and the use of companies registered in the British Virgin Islands (a known secrecy jurisdiction), WTK’s links are anything but direct. However, after six months of research, Oxfam has documented an opaque web of subsidiaries and related companies which link WTK to a number of SABLs in PNG. These links .. rely upon identical registered addresses, shared directors and shareholders, and findings of the COI to piece together a coherent picture.” 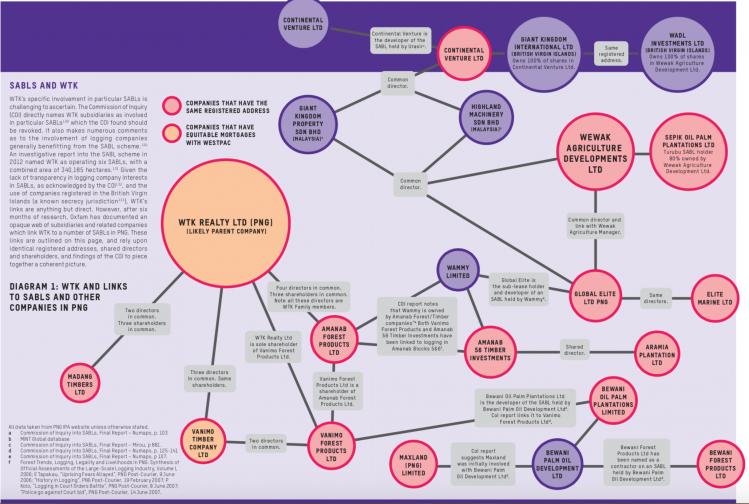 WTK is also closely linked by family ties to the related Sarawak company Rimbunan Hijau, which is known to be the biggest and most damaging of the “robber baron” companies operating in PNG.

Given these documented and extensive records of WTK’s involvement and profiting from the logging and plantation business in PNG, Sarawak Report would appreciate a fulsome and detailed response to these claims which we would be happy to publish.

Not just the throw away claim that the company is “not involved in any logging operations” as issued to The Edge.