Corrupted Cronyism Is Of No Use In A Crisis

The incompetence and inadequacies of the self-serving ragtag bunch of political opportunists who came together to grab power in defiance of the electorate through Malaysia’s backdoor coup has been shown up by the Covid crisis to horrifying effect.

The uselessness of this rivalling bunch of rent-seekers is matched only by their high-handedness. Flip flop regulations have been inconsistently applied with glaring exemptions for the cronies and politically connected, whilst the poor and marginalised have been forced to suffer and face fines and punishments as they struggle to make ends meet.

Intolerant crackdowns on migrant workers (whom Malaysian employers are only too willing to exploit in varying degrees of modern slavery) have rebounded counterproductively by spreading the virus further.

In Malaysia’s contract culture, which has been taken to its extreme by this government of former outsiders who have finally grasped elusive power, it is always the middleman who stands most to benefit when ‘relief packages’ are announced.

Certainly, little of the cash publicly announced to help those most endangered by the lockdowns and control orders that PN have enforced with such gusto (against others but not themselves) has arrived in the way of material help for distant rural communities in Sarawak. This according to several local leaders who have contacted platforms such as Radio Free Sarawak to say that they are struggling to survive in their isolated circumstances and running out of basic foodstuffs.

So, it comes as no surprise that the same communities are facing staggering levels of incompetence and neglect when it comes to PN’s ‘vaccine rollout’ in the state as well. Longhouse living is crowded and hugely vulnerable to infectious diseases and the dangers are made worse by remoteness from medical assistance and more limited immunity thanks to isolation.

Therefore, for the wealthy state government these settlements should be a priority for immunisation teams, who ought to be visiting them as quickly as possible to vaccinate as many as can be persuaded (most understand the importance of immunisation and are willing).

There is no shortage of cash. Indeed following the defeat of their federal allies in 2018 the deputy chief minister, James Masing, announced there were reserves of RM31 billion which he urged should be immediately splurged on ‘development projects’ (for which read crony contracts where the promised project is never actually delivered) before the opposition could win the coming election and get their own hands on the money. More money has now arrived in the form of the limited oil royalty agreement.

These are reserves that could now be used to ensure that strong and efficient teams of medical practitioners are fanned out across the state to bring the vaccine to remote communities. It hasn’t happened. Right now, the election has been unconstitutionally postponed owing to the crisis and yet local ministers are the ones using available helicopters to visit communities (and electioneer) rather than immunisers.

The first obstruction to proper efficiency of course lies with the GPS allies in the federal government, who are sending barely any vaccine to the East Malaysian state. Billions of expenditure has been announced as wave after wave of procurement (through middlemen naturally) has been made.

Yet the few vaccines that have actually arrived through this expensive process (Just 10% so far) have largely gone to cronies and mainland urban centres. Large quantities have also been spoilt, of course, through further crony induced incompetence.

“The biggest reason Malaysia under the backdoor government Muhyiddin is behind countries like Indonesia and Cambodia is due to corruption. From the beginning, the regime has been treating the vaccination program as one mega infrastructure project where they can milk for kickbacks. The longer they could drag or prolong the vaccination, the more money they could squeeze…. How could Malaysia administer only 2.63 million doses as compared to Indonesia’s 24.83 million (May 24)?” [Finance Twitter analyses the reasons behind the inefficiency] 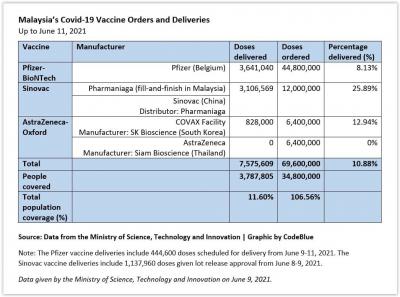 Over-priced purchases through middleman procurement yet to be delivered

Having ordered a vast consignment of Sinovac at top dollar prices (a vaccine that is well below par on performance indicators) through a politically connected monopoly supplier, it soon emerged that the supplier had botched up by agreeing to perform the repackaging of bulk supplies into individual doses.

At first this caused scandal owing to the delay as the unprepared Malaysian monopolist supplier attempted to set up its productions lines to perform the job for 300,000 vaccine jabs. However, now Sarawak Report has heard the situation is even worse than owing to this crony incompetence, because it appears the entire batch was in fact ruined because it was not stored according to the required cold chain since the facility was not ready on arrival.

This would explain much of the continuing delay and the company and federal government are welcome to deny this information received by Sarawak Report through medical insiders should they so wish.

Meanwhile, the high handed PN crony politicians are forbidding state governments like Sarawak from dipping into their election war chests to buy separate supplies. Why forego opportunities for commission after all?

Yet even the available vaccines are failing to be distributed properly in Sarawak, owing to the lamentable failures of a state government that operates on exactly the same principles as its federal counterparts.

Instead of focusing the entire energy of the state government on getting the vaccines out and pouring resources (at least some of that RM31 billion) into recruiting roll out teams, working with the private sector and hiring every vehicle in sight, GPS has drifted, lectured and bullied communities instead.

For a start, the state government has fallen in with the absurd MySejahtera project which requires the population to take its own initiative and get online to volunteer to be vaccinated at urban centres.

The system must work great for the digital companies who received the multi-million ringgit grants to set up MySejahtera – quite apart from the absurd commission it puts them in pole position to acquire valuable data on the population and apply for later data projects.  But what conceivable use is an online booking service to save lives in the remote non-wifi-connected communities of Sarawak’s interior?

The only answer is to get medical teams out to the villages one by one – use the helicopters. However, according to feedback from one of the more remote vaccination stations in Belaga, such efforts are plagued with inefficiencies that can only stem from lack of interest on the part of those responsible. 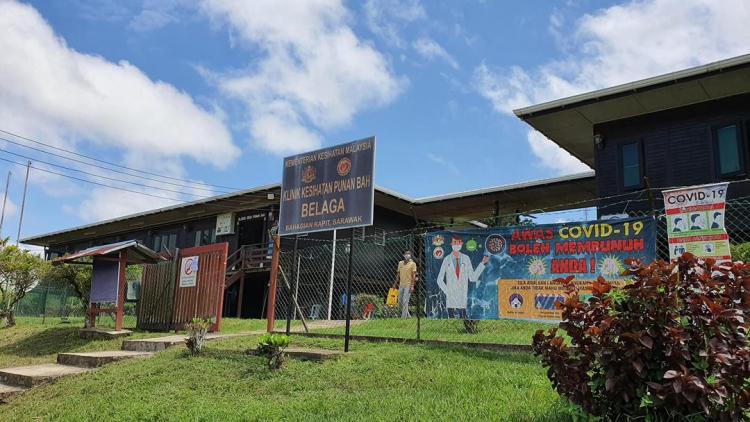 The station is hopelessly understaffed say locals, meaning there is no manpower to send teams upriver from the centre to villages themselves. Instead, Belaga has been sending out instructions to communities situated several hours away to make themselves present at the vaccine centre in two or three days time, sometimes even the next day!

There are then recriminations issued against communities who fail to adequately respond to such an enormous and expensive task at the drop of a hat. Finding the transport, paying for the transport, dealing with the transportation of elderly and often sick villagers over hours of either river travel or unmade roads is all left to the communities themselves to manage and arrange at a few hour’s notice.

If several of these vulnerable folk fail to appear as required, according to frustrated activists in the area, it is being treated as the community’s fault and the job of the authorities is treated by themselves as having been done. 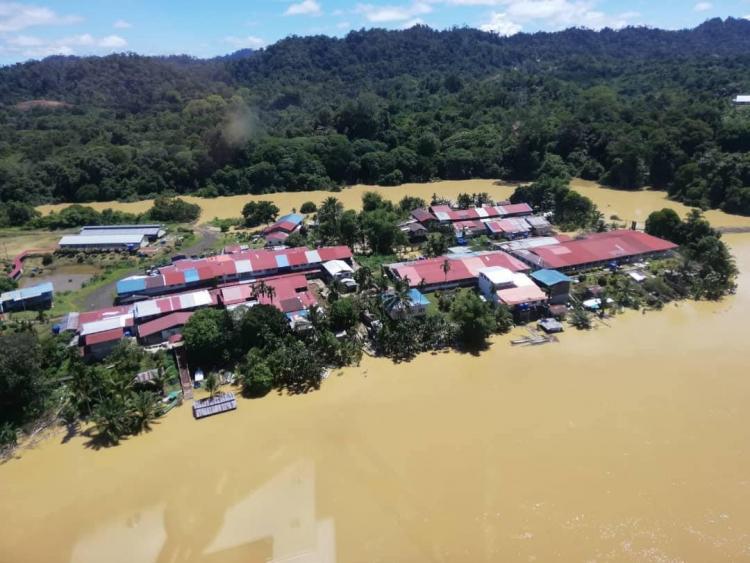 Required to transport the community 40 km upstream at short notice?

Just one longhouse community located 40 kilometers downstream of Belaga at Punan Ba has succeeded in getting the support they need in the locality. Headman Gebril Atong complained about the situation on Radio Free Sarawak after receiving instructions to transport the entire community by boat to the Belaga clinic.

Punan Ba then received a vaccine team on site and now have a doctor stationed. Sarawak’s RM31 reserve budget could accommodate a great deal more of a similar level service to the community but they are the only village in the region so far to be so lucky. 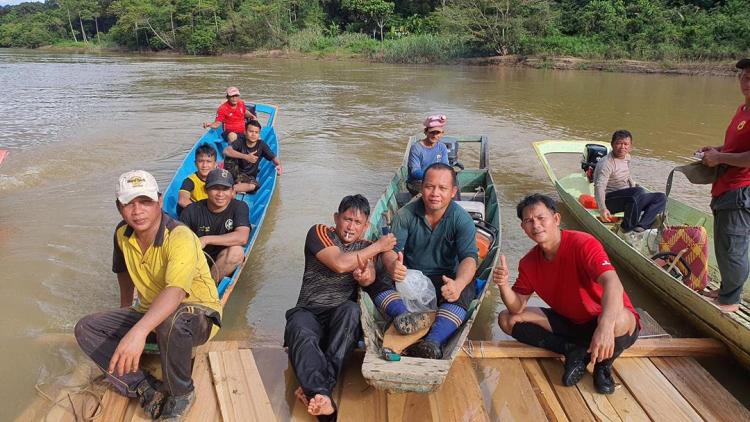 After making their protest the community have received the vaccine attention they need. Others remain dangerously neglected

Other communities are no different, including Kapit where elderly folk have been expected to undertake perilous journeys to get to the vaccination centres, including two octogenarians forced to transit a river full of rapids via longboat. Ludicrously, what outreach that has taken place by medical teams has predominantly merely been to register these communities rather than provide the actual immunisations needed.

Last week one of the most senior politicians in the state, James Masing, a Dayak who has long supported the Taib government which discriminates against indigenous groups such as his own, reaped the consequences within his own family community in Kapit.

His brother and brother’s wife died having not been vaccinated like the politicians and many of the urbanites. Masing has now called for the right measures to be taken. The realisation has come better late than never as Covid becomes rampant in Sarawak.

However, there are real concerns as to whether this crony driven government, whose elected representatives are above all obsessed by the lure contract corruption before all other priorities, can actually rise to such a task.

The community should take note and demand better from their elected leaders in Sarawak.