Hiding In Hospital Or Deadly Sick? 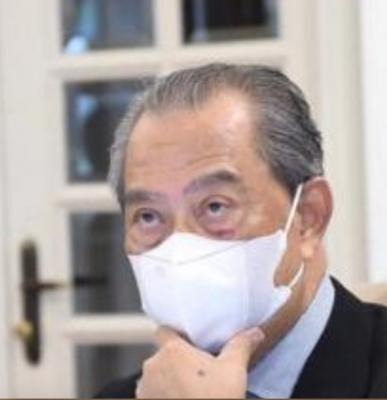 Not looking good – Mahiaddin the day before hospitalisation

It is now two weeks since the Malaysian prime minster arrived in hospital declaring a bout of diarrhoea.

In the process he left an already sinking ship government entirely rudderless at a time of total national crisis.

Despite this emergency within an ’emergency’ the public has since been offered the barest minimum in terms of detail about the health situation facing the chief decision maker of the country.

This at a time when millions are predominantly trapped inside thanks to failing anti-Covid measures, whilst a vast Cabinet of ‘Senior Ministers’ and other panjandrums have been caught having fun abroad, breaking lockdown rules, making ridiculous remarks (about the virulence of the ‘Spanish Fly’ compared to Covid, for example) and generally doing nothing useful for the nation.

The immediate and inevitable speculation was that for him to enter hospital at such a time it must be serious. Did Mahiaddin’s diarrhoea relate to a standard complication caused by the recurrence of pancreatic cancer problems many asked? However, when this hit the press some four days after his admission it provoked the single public comment issued so far on his condition.

Malaysians were told there was nothing at all serious behind ‘Moo’s complaint which was merely ‘an infection of the digestive system’ that a course of antibiotics would easily fix. These would be taken intravenously and he would be ‘discharged in a few days‘, according to the media statement.

That statement came out not last Sunday, but the Sunday before last on July 4th. Since then, complete and utter silence.

What are folk to think? Where else has such a cloud of secrecy descended at a time like this, when above all clear leadership is needed to save lives? North Korea would be more forthcoming.

So, what is really going on? According to the 4th July statement Mahiaddin is working from his hospital bed. Yet, although he has appointed a Deputy Prime Minister and agreed to finally allow Parliament to sit later in the month there has been no evidence to sustain the claim. Quite the opposite.

After two weeks there can only be two explanations for this lengthy sojourn. One is that the prime minister is in fact extremely ill indeed and the antibiotics are either not working or only form part of a wider picture of his failing health.

The other is that the PM is actually back in the pink but has decided to hide in his hospital bed rather than face the numerous calls for him to resign since he simply does not have the numbers to carry on. Perhaps he thinks he can re-build his following and is buying time by staying in his bunker?

Either way, as most Malaysians have long since concluded, the prime minister is useless to the nation in this time of crisis and loss of life, so he must step aside to let others tackle the myriad problems caused by his disastrous attempt at government.