How The Sultan Of Johor Acquired Land To Mine Gold?

Sarawak Report has received complaints that hundreds of cooperative farmers have been forcibly ejected from their lease-holdings after land was transferred from a state owned foundation to the Sultan of Johor.

Their removal took place in the same Gunung Arong region in Mersing where it was announced this week that the Sultan has applied for licences to mine gold in a joint venture agreement with Southern Alliance Mining Ltd.

The date of the transfer was April 2018, bang in the middle of the GE14 election campaign, when government activity is supposed to be suspended.

And yet, it was during this blackout period that investors, who’d earlier forked out for 99 year leases, have now discovered that the title was suddenly and secretively transferred to the Sultan. 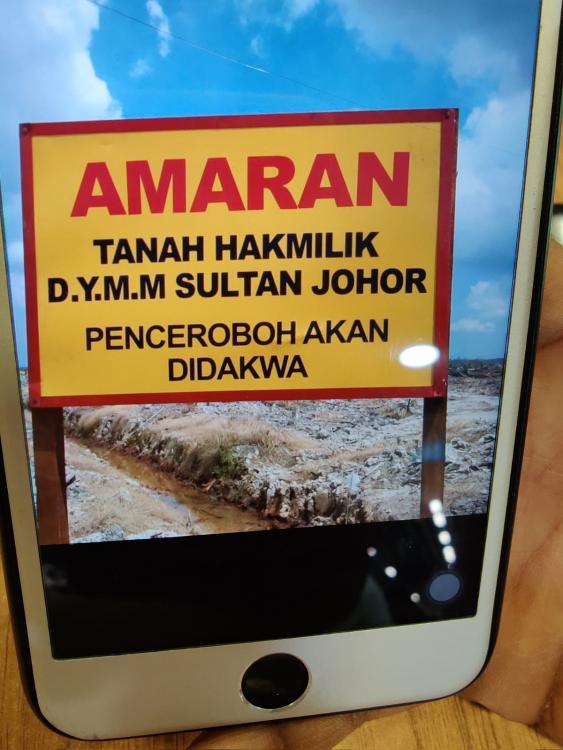 The change of circumstances was not made known to these would-be cooperative farmers until much later in the middle of 2020, they say, when sign boards were erected and verbal notices were provided, telling them to vacate their properties because the land no longer belonged to the state appointed cooperative foundation that had taken their money.

Many had invested their life savings in the scheme, but the cooperative now claims to have gone bust and the investors have yet to see any of their money back or to receive any explanation as to why they are now being told they are trespassers on the land or how it changed hands.

In May a police report was finally filed by the cooperative organisation on behalf of some 300 affected families. One told Sarawak Report:

“I know of one person who spent over a quarter of a million ringgit. Together we have paid over one million ringgit. Lately we have noticed all the surrounding land also has been cleared and the KOPERASI members are not allowed to enter to work in their allocated land. Sad to say our voices are not reaching to the ears of the government officials despite us bringing up this matter with the relevant authorities, apparently because this matter involves the VVIP land owner”

The area, which is near Mersing, fringes the supposedly protected forest reserve at Hutun Gunung Arong, according to plans viewed by Sarawak Report. It is a region that has also long attracted the interest of various mining concerns, owing to the existence of gold deposit. One venture entitled the Mersing Gold Project /Gunung Arong Gold Prospect involved the Canadian Monument Mining group as recently as 2011, but was later abandoned amidst reported litigation.

Documents, including a letter from the office of the Johor Chief Minister received by the Land Office in Mersing in February 2014, imply the land was formerly part of the region’s protected forest, but was allowed to become eroded by trespassers and squatters in recent years.

The same letter suggests that the Johor State Executive Council had decided to deal with the problem of the incomers by distributing some of the destroyed land for agriculture, in return for an investment by each small holder in the form of agricultural leases.  It is said the Johor State Govt decided in a meeting in October 2013 to grant the land to the state education foundation Yayasan Pelajaran Johor (YPJ) on the basis that incomers should form a Cooperative managed by the YPJ along the lines of a FELCRA scheme.

According to further evidence sighted by Sarawak Report, a so-called State Approval Area totalling 9,000 acres was accordingly designated as Mukim Padang Endau and duly transferred to the State Foundation, Yayasan Pelajaran Johor (YPJ), which then reached an agreement to lease 3,000 of these acres to the cooperative, Koperasi Peladang Dan Penternak Negeri Johor Berhad (KPPNJ Bhd), set up to organise the would-be farmers. Individual farmers were to be charged up to RM8,000 per acre to obtain a lease. 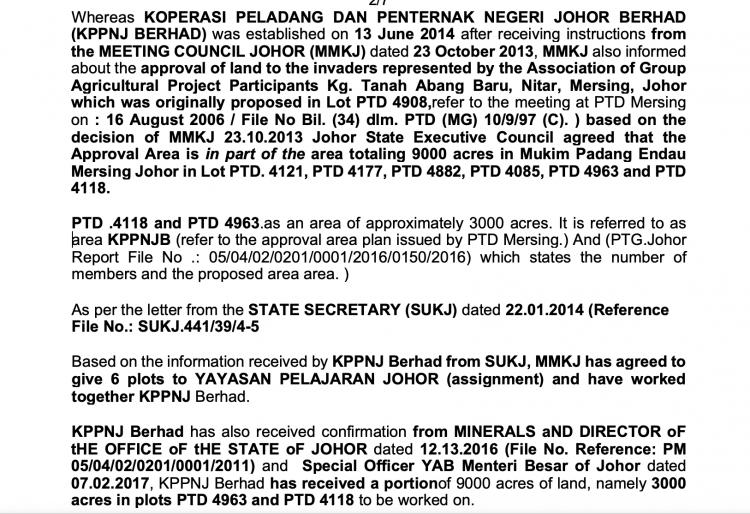 Translated excerpt from the original leases proposed to the cooperative farmers

Yet, despite these official decisions and the payments made by so many families for the promised leases, that policy appears to have later been officially reversed in favour of the Sultan without any warning or indeed compensation so far to the smallholders.

A new Chairman was voted to head the cooperative last year and Sarawak Report has viewed a long schedule of complaints and letters sent to different departments of the Johor State Government asking for explanations and recompense to members who are no longer permitted to farm the land.

Explains one victim who has lost over ten thousand ringgit:

“The cooperative have written to the foundation, to the State Land Council, to the Menteri Besar, until finally in May 2021 after no replies they filed a police report. Still no response from any quarter about our problem”

The disappointed community of deprived landholders are now concerned that their confiscated territory may form part of the wider area in the region for which the state appears to have granted a gold mine licence in the name of the Sultan of Johor, as announced by the company Southern Alliance Mining Ltd earlier in the week. 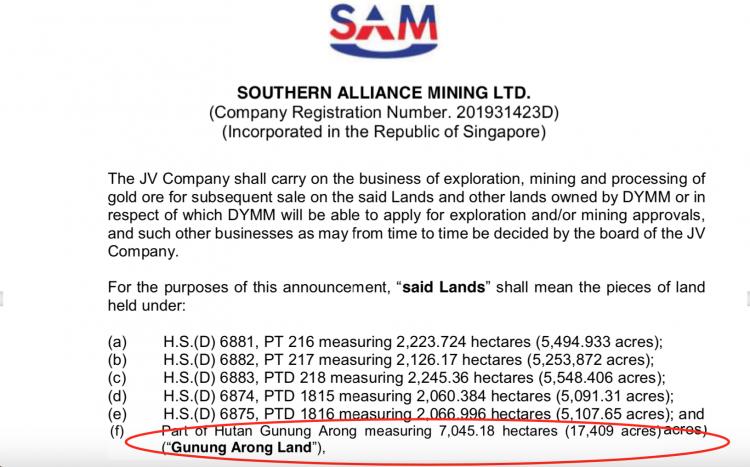 Some of the landowners have explained to Sarawak Report that the fact that their land has fallen into the hands of the Sultan in particular has made them fearful to speak out openly.

They also appear to be under the impression that this may be also the reason why they have so far received no response to all their protests from the State authorities, who had encouraged them to invest in the agricultural project in the first place.

Sarawak Report has now requested Southern Alliance Mining to confirm whether or not their JV licence involves the disputed land and to lay out their due diligence procedures regarding the ownership status of the land on which they have launched the joint mining venture.

We have asked if it would be considered acceptable practice for the company to rely on strong arm tactics by powerful individuals, such as their new joint venture partner, to acquire mining licences on lands that might already have been assigned by the state for other purposes or to other people?

In its announcement this week Southern Alliance Mining also refers to future plans to work with the Sultan to acquire yet more lands and licences in adjacent areas, for which the company would get right of first refusal.

In the light of this statement of intent Sarawak Report has further asked what assurances can be provided that more local leaseholders will not be thrown off their land without compensation to make way for mining?

We have asked the same questions of the State Government of Johor, which was removed from UMNO control by the 2018 election, which took place just days after the land title had been switched.

We have pointed out that the evidence viewed by Sarawak Report shows the Sultan acquired the land in mid April 2018 after the state and federal parliaments had been dissolved. We have therefore asked for the evidence of the meetings that took place to authorise the transfer.

UMNO seized back control of the Johor State Government in February 2020 following the backdoor coup which dislodged the PH government.  It was shortly after that return to office that the cooperative landowners say they became aware of their problems regarding the title to their land:

“The notices went up mid-2020 and we started to hear word of mouth that we had to leave the land. The signs were pulled down about two weeks later actually”

says one person who is familiar with the situation but does not wish to be identified. A number of folk had nonetheless already photographed the sign (see above).

Whilst they had received their receipts for payment to the Cooperative (during 2014-18), members say they had already started to worry prior to their eviction about why they had yet to gain their official leaseholder documents. They now conclude that this transfer of ownership, which they learned of only two years later, was the reason why and that the delay in enacting the eviction may have been linked to the existence of the PH government during the interval period.