Research by Sarawak Report has revealed the hitherto unreported ownership by the Sultan of Selangor of a key company behind the state’s hugely controversial decision to de-gazette a swathe of protected forest at Kuala Langat.

The decision, which critics (who include members of the ruling PH government) say was rushed secretly through back channels and later in the face of opposition from the state assembly, will destroy a region singled out for protection as long ago as 1927 and will eject native Orang Asli from their traditional homes.

After the scandal originally erupted in the global media in February last year, following protests by the affected native people, company documents show that the Sultan quietly transferred his ownership of 40% of the shares in the company Titian Jutaria Sdn Bhd to the other shareholder, Syed Budriz Putra Jamalullail, who is his nephew. 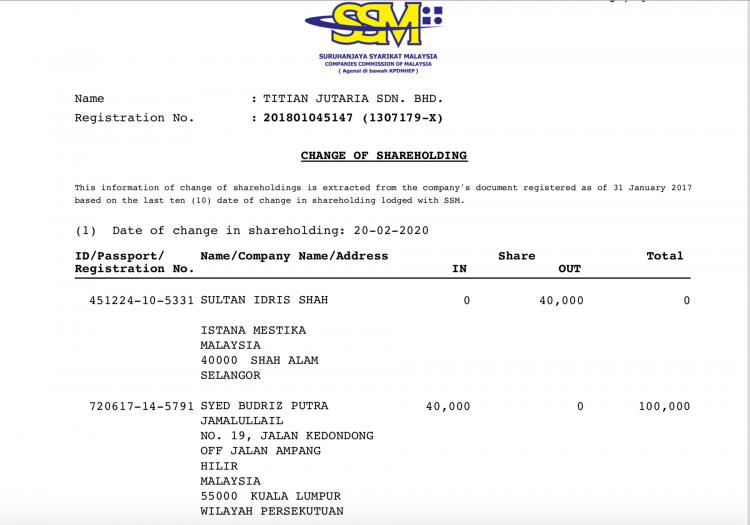 Meanwhile, the two directors of the company continued to be Jamalullail and the Sultan’s son and heir, Tengku Amir Shah Ibni Sultan Idris Shah, who also resides at the Istana Mestika. 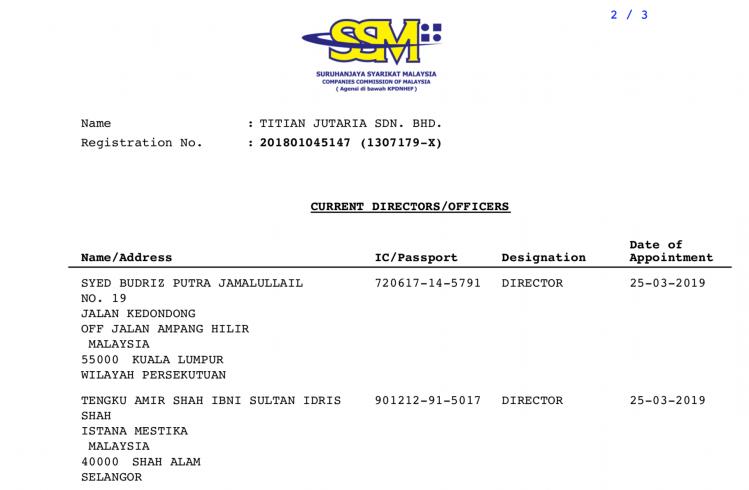 The Sultan had ben the co-owner and his son a director, together with a nephew

After the scandal became more widely reported, it appears that Titian Jutaria Sdn Bhd was later dissolved altogether, although no date for the closing of the company has been so far registered and nor have any details of the capital and income flow of the company, which claims ‘small company exemption’ from having to produce such information. 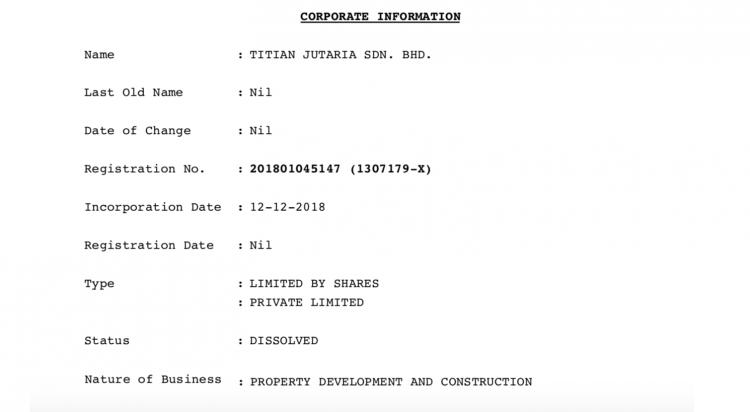 Sultan of Selangor appears to have now exited the deal?

Any enquiry into the matter, which protestors have now rightly called for, should therefore publicly ascertain who now stands to benefit from the massive project to rip out and develop over 900 hectares of valuable remaining peatland forest in the state… and for how much they acquired that interest from Titian Jutaria.

The evidence now obtained by investigative journalists indicates that the ownership of the development rights has in fact passed into the hands of none other than the Yaw family who are behind the Taib crony timber company Samling, one of the biggest plunderers in Sarawak which has destroyed vast swathes of the East Malaysian state. Sarawak is currently suffering from floods and mega-logjams caused by logging.

So, what was the deal that passed these rights from the people of Selangor to the timber raiding company from Sarawak with one of the worst records in the world regarding careless practices, and who received how much?

Harassment of Critics of Royal Abuses

Meanwhile, considerable concerns remain as to why after two years of controversy over the raid on this rare remaining wilderness in West Malaysia, this basic information (available in company records) about the state sultan’s personal ownership of the company at the time the deal was pushed through has remained so far unreported.

Late last year one analysis of the situation by the Singapore Straits Times explained that the matter was considered ‘delicate’ owing to the status enjoyed by royal figures in Malaysia. Again, the paper mentioned the involvement of the Crown Prince, but did not refer to the publicly registered original ownership of the company by the Sultan himself:

“The issue is a tricky one to negotiate for PH leaders, as the Selangor Crown Prince Tengku Amir Shah Sultan Idris Shah is a stakeholder in the company jointly developing the 931ha plot with the Selangor government.
Although the royal families are symbolic heads of states in Malaysia’s constitutional monarchy system, they wield significant influence. Malaysian politicians largely avoid clashing with them….

Sarawak Report is well aware of the reprisals facing those who report on Malaysia’s royals, which in turn serve to keep public interest information hidden from public knowledge.

Indeed we have recently been notified of a criminal investigation opened against the editor of this website, citing the country’s ‘multi-media’ laws and its sedition act over a recent article ‘Malaysia Needs To Resolve Its Sultan Situation”.

The editor is not subject to Malaysian jurisdiction in such matters, having no presence nor business in the country, nor do these outdated and repressive laws exist in any of the countries where they do reside. However, for local media the threat is real, limiting reporting on continuing royal land grabs against the country’s fast depleting forest reserves.

As a result the country is ripping through the last of its finite natural resources with lightening speed providing very little benefit to the poorer half of the population, whilst after years of this behaviour royal families have built billion dollar palaces and colluding officials have in turn funded themselves and their political parties out their own cuts from the proceeds.

The Malaysian public now have to decide whether to continue to indulge this favouritism and cronyism or demand that the laws designed to protect the environment and interests of the wider public should apply to all without exception. There is little time left to save the little of Malaysia’s forest that remains intact.

Like much of the rest of the globe which has been brutally damaged over the last century, thanks to this same category of poor governance and unrestrained greed armed with new technology, Malaysia’s once fertile and beautiful natural landscape is now as a result facing a catastrophic failure.

The drive to monetise each last tree and living area represents a mortal danger to the survival of the country’s people, many of whom have already suffered from being driven from their homelands to make way for logging, mining and construction driven through without due consultation or consideration for the wider public interest.

Symbolic is the crisis of extinction facing the country’s own proud national emblem, the once living tiger from its forests. There are now estimated to be less than a hundred of these animals living in the wild. And, of course, the demise of this species is just one symptom of the damage that has been done to an ancient eco-system that plunderers failed to value beyond the immediate cash to be obtained by them from grabbing timber and planting quick but short-term cash crops.

Worse, as the resources have started to run out and as Malaysia’s population has started to wake up and vote out the corrupt and complicit parties to such deals, the sense of urgency amongst those who have exploited their ‘special status’ to obtain waivers and concessions appears to have increased.

Recent events indicate that Malaysia’s class of royal businessmen have redoubled their efforts to lay hands on what remains to be exploited, even to the extent of favouring the parties that lost the last election by assisting in their return to office.

Behind the scenes concessions by certain state governments to royally connected companies have been facilitated by such measures . For example, Sarawak Report has established that during the closure of state business over the period the last election the Sultan of Johor was quietly transferred (at no recorded cost) a chunk of state land for ‘agricultural purposes’ which was known to contain gold deposits. 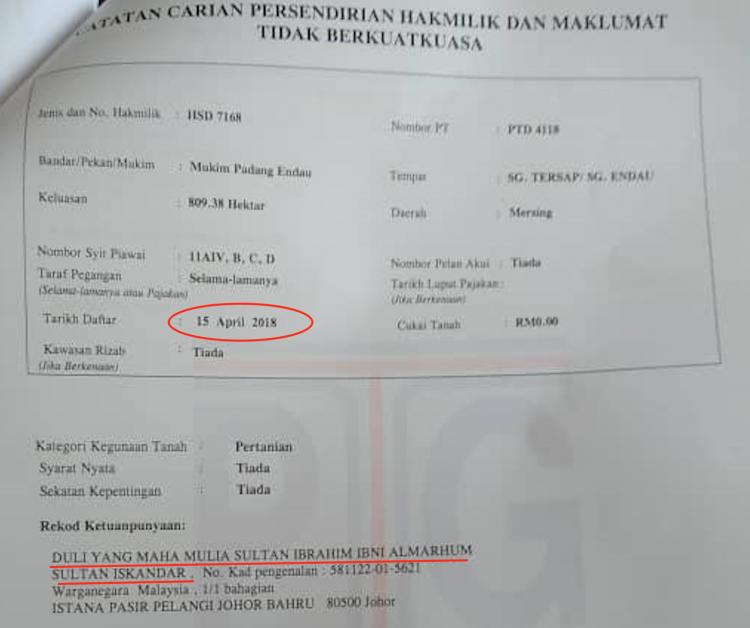 After the surprise return of a PH government that action remained frozen. However, once PH was over-thrown in 2020, thanks to the betrayal by the ex-Johor Menteri Besar, this piece of business was resumed under a restored UMNO/PN state government.

A gold mining licence has been awarded to the Sultan, according to an announcement by his business partners, and several modest farmers who had invested their life-savings to buy agricultural licences from the previous state run cooperative on the land have been simply ejected from their properties without compensation.

This latest scandal on the other hand has now embarrassed a state government which is at least perceived as being run by a reform minded opposition in Selangor.

The issue first broke into the open in February last year just before the overthrow of the PH government thanks to the staged defection to PN/UMNO of Azmin Ali, who was himself the former Menteri Besar of Selangor and remains close to the present hierarchy in the state who were largely promoted by himself.

Sarawak Report has been informed that the present MB, Amirudin Shari, considered himself as having little choice in the matter given the pressure he was allegedly under from powerful quarters and when the decision was originally reported it that the companies behind the move were the now dissolved  Titian Jutaria Sdn Bhd and the state’s own investment arm, Menteri Besar Inc. itself.

This has once again made a state government complicit and the full list of beneficiaries from Menteri Besar Inc should also be examined by the proposed enquiry demanded by Amirudin’s party bosses, who emerged as the winners of the last election and ought by right to be now running the country.