‘Sportswashing’, as it has become known, is the practice whereby dubious businessmen and murderous and autocratic regimes seek to launder their reputations through the reflected glory of a rising football club (usually British) thanks to their injections of vast sums of questionable cash.

The latest has been the Newcastle buy-out by Saudi Arabia’s PIF Sovereign Fund last week. The deal, initially brokered by the longterm Arab money junky Amanda Staveley, had been originally rejected by the Premier League given the obvious fact that the bid was on behalf of a foreign regime with one of the worst reputations in the world for autocratic and murderous repression.

It is no secret that the government of Boris Johnson subsequently lobbied heavily to reverse that decision and has played a pivotal role in doing so.

Indeed, it has been widely reported that the prime minister and his inner team sprang into action on behalf of the ‘friendly power’ after an angry text was fired personally to him by the sinister Mohammad Bin Salman (MBS) straight after Amanda’s bid had been rejected on the grounds it represented a government acquisition.

MBS’s text demanded Boris reverse the “wrong decision” by the independent football body in order to keep friendly relations with this key buyer of British armaments.

Hi Chief of Staff, Edward Lister, is reported as responding that he would do all he could to help the irate Saudis score their ultimate objective. This was before he was simultaneously appointed ‘Gulf Envoy’ by Boris (whilst acting as Joint-Chairman of the UAE Business Council) and then later sacked over the exposure of various other conflicts of interest earlier this year.

Indeed, Sarawak Report has it on good authority that Lister hot-footed it to Saudi in early 2021 on this very mission where, after disdainful treatment from MBS, he eventually got his audience and assured the petulant prince that he would be offered an open goal on his next attempt, courtesy of the Boris administration.

Newcastle fans might cheer such championing, given they have been sick of losing and of penurious times under the previous ownership of the dour Sports Direct boss, Mike Ashley. Saudi money should buy some expensive foreign players to provide them the thrill of ‘winning’.

However, fans in a democratic country might do well to consider the consequences of the corruption of their game, which could extend to the corruption of Britain’s national values that underpin our free society, good governance and the rule of law. 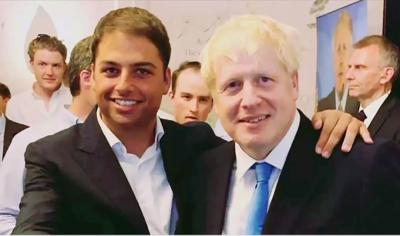 The British government’s intervention is in itself troubling. However, more so would be signs of self-serving and self dealing in the process.

There exist in this deal sufficient indications of such potential conflicts of interest to justify Sarawak Report in asking certain questions that deserve full and frank answers to lay those concerns to rest.

The lynchpin in the second successful open-goal negotiation on behalf of Saudi Arabia turns out to have been not the departed Edward Lister but another key crony appointed by Boris, the Conservative Party Chairman, Ben Elliot.

Ben Elliot has struggled over recent weeks to fight back a growing chorus of concerns over conflicts of interest pertaining to his private business interests as a ‘connections broker’ for wealthy clients seeking access to British society and institutions, given this role as the chairman of Britain’s party of government.

As a nephew of the Duchess of Cornwall and an old Etonian, Elliot has fashioned his entire career around selling foreigners party invitations to the right places through a so-called ‘concierge’ company named Quintessentially, which provides services and access to paid up members. He has extended his activities into lobbying and PR via a growing network of related private companies, such as Hod Hill Limited and Hawthorne PR.

Questions have already been raised over his methods in financing the Conservatives’ booming coffers through similar tactics, providing opportunities to gain social and even lobbying access to Boris Johnson and other decision makers in the government in return for cash.

He has even gone so far as to set up a secretive ‘250 Council’ of party advisors accorded with special privileges to meet and discuss what is effectively government policy behind closed doors with the conservative hierarchy  – the ‘250’ standing for the 250,000 pounds each member is required to provide the party before they achieve this status.

And there have been further concerns voiced that some of these members and benefactors to the party he is chairman of are also private clients of Elliot’s private access for cash companies, from which he has introduced them to the party.

Last month the official body, the Registrar of Lobbyists, examined Elliot’s apparent business conflicts and let him off complaints raised, but with a warning that would have doubtless shamed any person of scruple, which one assumes he is. According to reports:

“Harry Rich, the registrar, had written to Elliot advising him “to be cautious about the possibility of engaging in consultant lobbying activity (perhaps unintentionally) by not making a clear enough distinction between his role as a director of Quintessentially and his other activities connected to government” [the Guardian]

In that spirit therefore, Sarawak Report queries some very glaring links between Elliot’s lobbying circle, his inner clique around the Boris Johnson leadership of the governing Conservative Party and the management of the now successful Newcastle takeover bid by Saudi Arabia.

The links should be explained in a transparent manner so that inevitable concerns over conflict can be fully eliminated.

The salient figure in the re-packaged Newcastle bid is a person who has no previous Middle Eastern connections, the UK property investor Jamie Reuben. The delighted Mr Reuben appears to have entered the deal from nowhere to take a 10% interest in the buyout (that Saudi Arabia naturally could have afforded itself as it had earlier proposed) and a seat on the Newcastle board, from where he can rub shoulders with the representatives of one of the world’s largest funds.

Also on the board is an equally ecstatic Amanda Staveley, who has at last creamed off the cash deal of her dreams after a lifetime flirting with fortune that previously ended in failures in the Middle East – this through the 10% she too has obtained from the deal.  Saudi Arabia controls the remaining 80% and effective total control of the club.

So, who connected Jamie Reuben to the deal as there is little in his background that would link him to the Middle East based Staveley? After all, the Reuben family fortune (Jamie, aged only in his 30s, is merely the heir) was firmly founded in the Russian side of the global economy back during the height of the so-called ‘Aluminium Wars’ in the 1990s.

One person the two business people do have in common is the Conservative Party Chairman Ben Elliot. Amanda Staveley is Elliot’s client at Quintessentially (as is her Saudi Arabian based Iranian husband) and she is also a good friend.  Jamie Reuben, on the other hand, is more than a friend to Ben Elliot. He is an inseparable political ally and a member of the 250 Club.

The question should therefore rightfully be put, in the context of considerable public interest, as to whether Elliot introduced the pair for the reprised Saudi Arabian bid and, if so, what purpose there was in bringing a key Conservative Party funder into the deal just as the government had taken it upon itself to pressure the independent Premier League board into reversing its decision against the Saudi bid?

Surely, such an involvement should have been actively discouraged instead, owing to the very delicate circumstances where the government has pressured an independent body to change its decision on behalf of a foreign power?

Given such questionable judgement, is it not incumbent to ask whether Mr Elliot’s private business connections with these partners resulted in any benefit to him –  or any spin offs to the party itself as the full weight of the UK government was brought to bear to revive the rejected earlier deal?

Mr Reubens is exceedingly wealthy. However, were it possible, the reputation of his family relating to the origins of that wealth is even more sinister than that of MBS himself. Jamie’s Indian born Iranian father and uncle, David and Simon Reuben, started life in poverty in London’s East End before they got stuck into business in Russia at the height of the mafia bloodbaths during the post-Soviet era – they emerged as multi-billionaires.

Their former company Transworld cornered over 50% of the entire production of aluminium in Yeltsin’s Russia, which was the super-power’s 3rd largest industry at the time, together with a multiplicity of other interests, which they hid through a myriad of off-shore concerns. This according to numerous investigations by various authorities including in the United States, denunciations by opponents in Russia and a devastating article by Fortune Magazine in which the brothers had cooperated in a attempt to buy good publicity.

The Fortune Magazine account charts their relationships with known mafia mobsters from the Soviet Union, corrupted politicians, a hundred million dollar theft from the Russian Central Bank, exploitation of workers, asset stripping, ‘tolling’ racketeering and the brutal deaths of several critics – all of which the article and others have said cannot be directly laid at the brothers’ door. It was just that it was they who exited with billions from the chaos.

The Reuben brothers sued Fortune Magazine over the article (in London naturally) however the case was settled amicably, explains a postscript to the article which remains online for all to read.

It makes one wonder why any respectable figure would wish to do business with the Reubens let alone why a respectable political party would wish to receive huge donations from their son and entertain the elders in the process? Apparently the Conservatives do.

Indeed, the acceptability of the Reubens’ cash in UK high society is such that in an unprecedented move Oxford University consented to dedicate a college in their name – Reuben College.

An inauguration statement explained that whilst some might question the acceptance of the Reuben millions the the university had done its own extreme due diligence into their wealth and were left fully satisfied that it was unblemished in any way.

Jamie Reuben was reportedly introduced to Boris Johnson by his friends the Goldsmith brothers, who have formed part of his closest inner politics circle since the days Johnson was Mayor of London.

It resulted in an astonishing appointment of the young Reuben to be Chairman of Boris’s second election campaign for mayor in 2012 at the tender age of just 25. Reuben has remained in London building up a property portfolio and staying close to conservative politics as part of Boris’s ‘Advisory Council’ and as a major funder behind the Tory’s 2019 election win.

His close companionship with Ben Elliot is well known. The question is therefore repeated as to who brought Jamie Reuben into a deal with Amanda Staveley that the Boris Johnson government had committed to push through for Saudi Arabia?

If Mr Elliot was not involved can he state the full agenda for discussion behind his two visits to Saudi Arabia over the past year of Covid restrictions and open up his lobbying and client lists and payments for the period he has been in office as the Chairman of the Conservative Party?

Meanwhile, given the sensitivity of this deal why was Mr Reuben not vigorously discouraged by the Conservative Party and Prime Minister from getting involved altogether – as opposed to being apparently blessed into the mix?