The disgraceful discovery of a coal mining licence issued earlier this year to recent salaried official of the GPS State Government has sparked outrage amongst villages in Tutoh Baram where campaigners are now planning to lodge a police report.

The projected Tutoh Coal Field comprises a huge 15,000 hectare site located in a remaining area of protected forest around the environmentally sensitive source of the Tutoh River, a region already ravaged by logging. 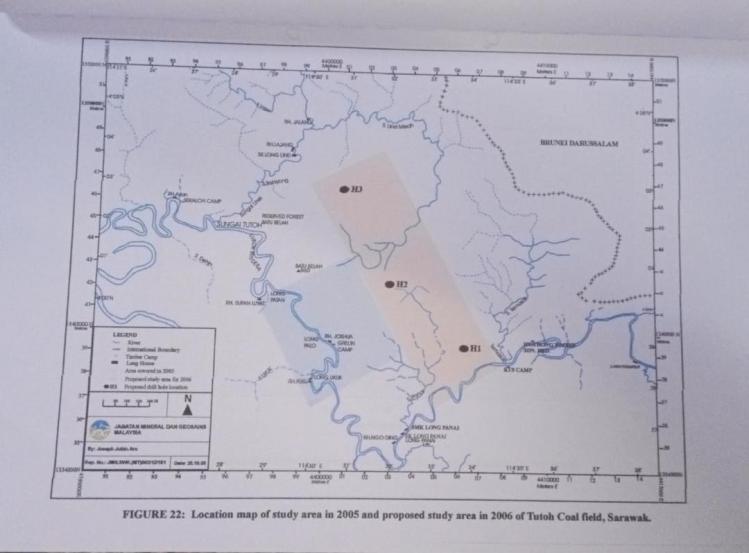 The ex-official, Sudarsono Osman whose family is from Java, was previously the Director of the Land & Survey Department when the area was originally prospected, according to maps and documents drawn up in 2006.

He then became the Permanent Secretary to the Ministry of Resource Planning and Environment at the time a licence application by local people was rejected in 2017. A cooperative of members from the native community in the area had applied for the licence to manage the mine, say angry protestors from the area, but the ministry turned it down.

Documents sighted by Sarawak Report indicate that the proposal was placed following a meeting of local representatives from three of the five villages in the area which include Berawan, Kayan and Dusun homelands.

Local community members met to apply for the licence

Subsequently, as Sarawak Report can now exclusively reveal, a licence was issued on 14th April of this year to another company, Nikmat Sumber Sdn Bhd, part-owned by none other than Sudarsono himself!

Campaigners in the area are now gathering local people to inform them of the outrage:

“This man was until just recently a senior salaried civil servant under the GPS government directly involved in the surveying and licensing process for this very mine. It is very clear that he used his positions as Director of Land & Survey Department and then Permanent Secretary to the Natural Resources Department to first deny local people the opportunity to raise resources from their own territory and then to organise for the licence to be granted to himself instead along with family members”

fumed the Baram’s PKR information chief, Dennis Along, who is one of several local activists who plan on bringing the matter to the police and the MACC for corrupt practice, given Sudarsono’s blatant manipulation of his public positions for personal gain.

The coal mine project could be worth hundreds of millions if not billions of ringgit to the local community. Yet, as the protestors point out, if the mine is owned by outsiders using an imported workforce, which has so often been the practice in Sarawak, the local folk could again receive nothing from their own resources. As one campaigner who wishes not to be named pointed out:

If the profits were going to the community that could transform the lives of everyone who lives here. However, once again, we see how a GPS crony is seeking to steal the wealth for himself thanks to this resource grab. This man is not even from Sarawak let alone the Baram community who have suffered the loss of their lands, their trees their farming rights and now this”

For the local people the coal grab represents just one more episode of relentless resource grabbing in the region.

Notoriously another swathe of NCR land was appropriated for a nominal amount from the local Berawan tribe during the 1990s by the Taib family to form the so-called Royal Mulu Resort. The Taib family have also been granted lucrative logging concessions on native customary lands around the park itself.

Despite these concerns, it seems the company that Sudarsono is planning to bring to strip out the coal has no worries. In a letter the Malaysian mining company Palmsphere reassured Sudarsono it was confident that although anger “over local native issues” is to be expected as “the norm”, they are experienced in dealing with such matters and getting the job done:

We have been made to understand that potential mining areas in Sarawak is currently facing local community issues. We believe this issue are at norm [sic] in Sarawak in regards to the local native issues which we have previously dealt with in Kalimantan Indonesia despite cultural and religious differences . Thus we are confident that we are able to fully undertake and resolve the local native issues amicably based on the advice and directives in line with the Sarawak State Government guidelines as a whole”[sic]

This is despite the fact that until now none of the communities had been warned that a licence has been issued for the mining to take place nor have they been consulted about this project on their land following the rejection of their own proposal by the GPS State Government.

The affected communities are historically GPS supporting long houses in the upper Tutoh region near the Mulu National Park. The region is in the closely fought seat of Mulu (N 78) which has been targeted by the PKR opposition party in the coming state election.

However, the rival PSB which is funded by timber company interests is hoping to split the vote against GPS and plainly the powers that be in Sarawak reckon they can continue to control the native folk whom they have exploited in so many ways.

According to records, the licence to Nikmat Sumber was awarded in the middle of the Emergency lockdown period just a few months after the company was itself incorporated in August 2020. The registration of the company describes it as a ‘holding company’ and it contains just one thousand ringgit worth of shares and has filed no accounts.

The company is therefore without any mining experience or capacity and plainly Sudarsono has merely obtained the lucrative right to subcontract the job.

The original two shareholder directors of Nikmat Sumber were Sudarsono Osman himself and his relative, Abang Khalid bin Abang Marzuki. Marzuki’s son is married to Sudarsano’s daughter and was also a director of the company Gegasan Abadi Properties which scandalously sold the Merdeka Palace Hotel for a hugely over-priced sum to FELDA.

A third director brought in some months later just before the issuing of the licence is a Chinese Malaysian businessman Yong Hui Suk. Therefore, the project so far follows a familiar pattern for ‘klepto-enterprizes’ in Sarawak, where crony officials work in tandem with business collaborators to exploit concessions. 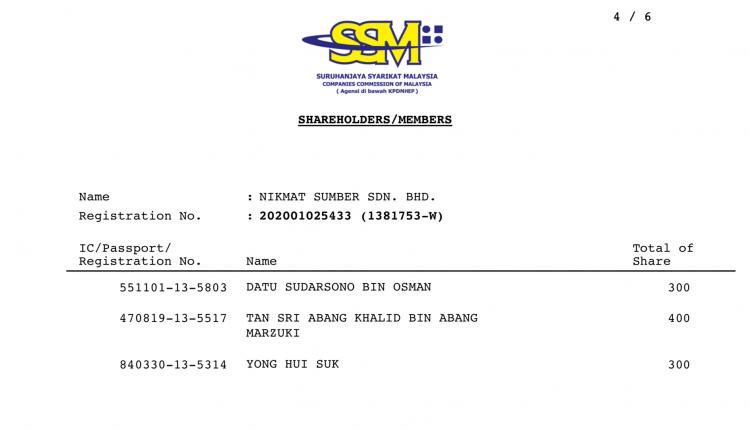 The documents seen by Sarawak Report indicate Sudarsono has been touting for a major company to take on the business of exploiting his valuable concession the moment he got the licence.

These include a Letter Of Intent written personally to Sudarsono 29th July by a prospective sub-contractor, the Malaysian public company Palmsphere (L) Berhad, thanking him for enquiring about their services and grovelling for the opportunity to exploit the licence in a business partnership with himself. 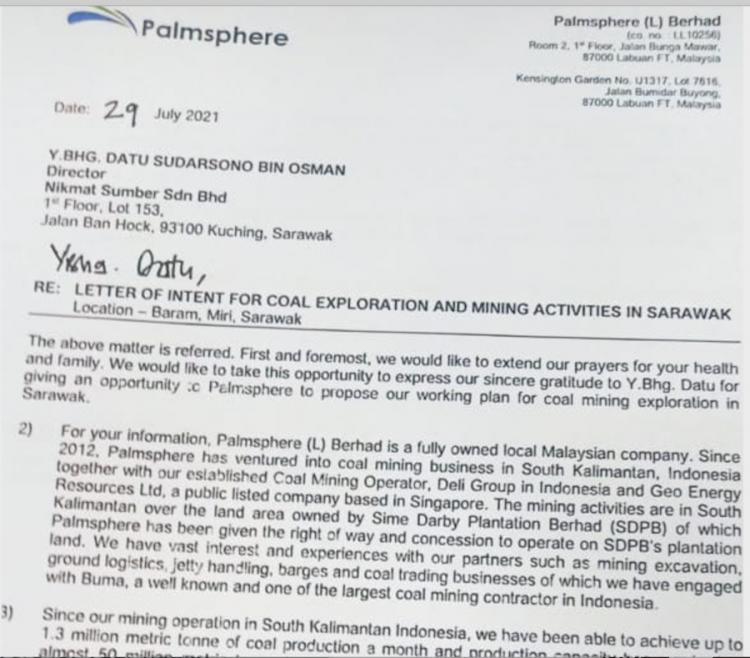 Please can we be your sub-contractor? Sudarsono is plainly seeking to profit from subcontracting the licence to a company equipped to do the work

Within the letter Palmsphere’s Managing Director, Amirul Bahman Rahim, details its credentials as a major established mining company which has been active in Kalimantan since 2012.

He even claims to have been questionably mining on Indonesian lands which had been leased to the Malaysian government-owned Sime Darby, not apparently for mining but for the purpose of plantation and oil palm.

“We have vast interest and experiences with our partners such as mining excavation, ground logistics, jetty handling, barges and coal trading businesses” he further boasts, stating that Palmsphere’s three existing coal fields in Indonesia contain deposits totalling some 400 million metric tons of coal (with a value being around $12 billion).

Bahman Rahim continues that he sees very promising opportunities for similar mining in Sarawak, starting with the proposed present partnership with Sudasarno’s company but with an eye to further ventures.

The fact that for over six months no mention has been made to the local community about these plans to start digging for coal in their native lands, even though Sudarsono has been looking for sub-contractors, provides the clearest indication possible that there have been no plans or efforts made to engage them in consultation or to even consider how the local people might benefit from this monster mining operation potentially worth billions.

The outrageous letter from Palmsphere concludes by saying the company is willing to abide by any requests of the State Government of Sarawak, making it clear the Palmsphere managing director is confident that the licence-owning former civil servant is in full collaboration with the GPS government in dealing with any native protests over the mining on their lands or other potential issues.

Campaigners believe the plan will be to exclude local people entirely from the operation:

“They will be looking for cheap foreign labour who will probably be badly treated and may well introduce diseases to our area. They are clearly hoping to take all the profit for themselves. They cannot turn round now and somehow pretend they were planning all along to bring wealth and benefits and jobs to the local communities after all”

Coal mining brings devastating destruction to the environment creating huge areas of dusty landscape in the place of forests where hunting, fishing and resources can be accessed by local people.

If there is no economic benefit to be had either the future looks very bleak for the people of N 78 unless the licence is cancelled and Mr Sudarsano Osman is held to account.