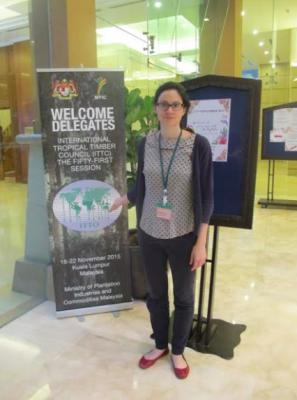 (Kuala Lumpur, Malaysia) The International Tropical Timber Organisation has banned the Swiss rainforest advocacy NGO, the Bruno Manser Fund (BMF), from attending its annual conference, which is being held in Kuala Lumpur from 16 to 20 November 2015. BMF delegate Johanna Michel (picture), who attended the conference on behalf of the Swiss organisation, has today been asked by the ITTO secretariat to leave the conference premises. The decision to ban BMF from the conference was taken by the Malaysian chair, Freezailah Che Yeom, on request of the Malaysian delegation.

The exclusion of BMF by ITTO follows critical questions raised by the Swiss organization over the loss of US$18 million in ITTO’s speculative investments. None of the questions raised by BMF with the ITTO secretariat have been answered. Yesterday, an ITTO working group had to admit that US$6 million were lost in LM Managed Performance Fund, an Australian real estate fund by bankrupt investor Peter Drake. Another US$12 million invested in Ardent 365, a Cayman Island trust fund, are also believed to be lost. The Bruno Manser called for ITTO to appoint an independent special investigator.

The Bruno Manser Fund protests strongly against its arbitrary exclusion from the conference and calls on donor countries to stop funding ITTO due to the organization’s serious governance flaws. “There is no sustainability without transparency”, BMF director Lukas Straumann said. “We are particularly disappointed that Malaysia, as the host country of the conference, has abused the ITTO’s procedures to ban civil society from voicing its legitimate concerns”.

ITTO is an intergovernmental organization based in Yokohama dedicated at “promoting the conservation and sustainable management, use and trade of tropical forest resources”. It was established in 1986 under the auspices of the United Nations amidst worldwide concern for the tropical forests.