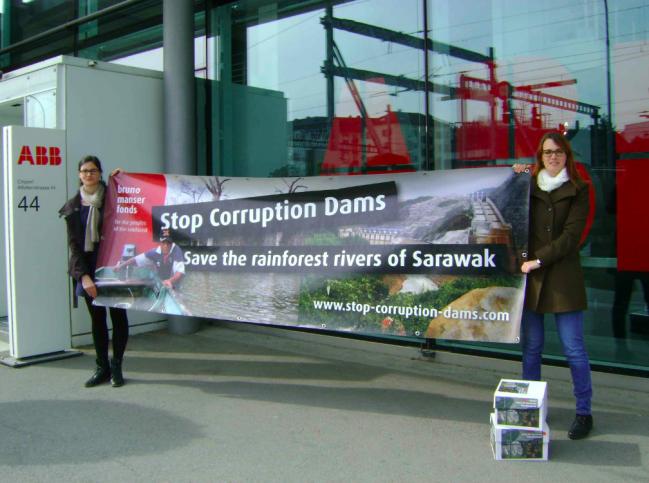 The Bruno Manser Fund has handed over a petition against ABB’s dealings in Sarawak, Malaysia – ABB refuses to provide any information on its business ties with the Taib regime

(ZÜRICH / SWITZERLAND) 65,318 individuals demand that ABB withdraw from its business dealings in the Malaysian state of Sarawak on the island of Borneo. The Bruno Manser Fund handed over the petition at the ABB headquarters in Zürich Oerlikon last week. The petition was addressed to the CEO of the Swedish-Swiss company, Mr Ulrich Spiesshofer.

The Bruno Manser Fund delegation presented the petition on the occasion of a meeting with a number of ABB representatives. The signatories are demanding that ABB withdraw from its collaboration with Malaysian power supplier, Sarawak Energy. ABB is furthermore asked to act to conserve the rainforest and to contribute to the improvement of the human rights situation of the indigenous peoples affected by the Murum Dam.

Research conducted by the Bruno Manser Fund revealed last year that ABB is involved in Sarawak’s dam scheme: ABB Malaysia has delivered the turbine governor and additional technical equipment for the controversial Murum Dam and labelled Sarawak Energy as one of their major customers. The state-owned company, Sarawak Energy, has repeatedly handed out contracts to companies linked to the family of the former Chief Minister and current Governor of Sarawak, Abdul Taib Mahmud. The Taib family has amassed stakes in over 400 companies worldwide and accumulated wealth in excess of US$20 billion during Taib’s 33 years as Chief Minister and is currently under investigation by the Malaysian Anti-Corruption Commission (MACC).

At the meeting between ABB and the Bruno Manser Fund, the company downplayed its business ties with dam developer, Sarawak Energy. ABB refused to provide any information on the company’s business dealings in Sarawak. Questions concerning the extent of their business in Sarawak and also relating to the human rights situation and corruption were left unanswered.

The Murum Dam is the first of a series of mega-dams in the rainforest of Sarawak. It is flooding 250km2 of rainforest and forcefully displacing 1500 indigenous people. The proposed 12 dams would affect over 2,300km2 and an estimated population of between 30,000 and 50,000 people.