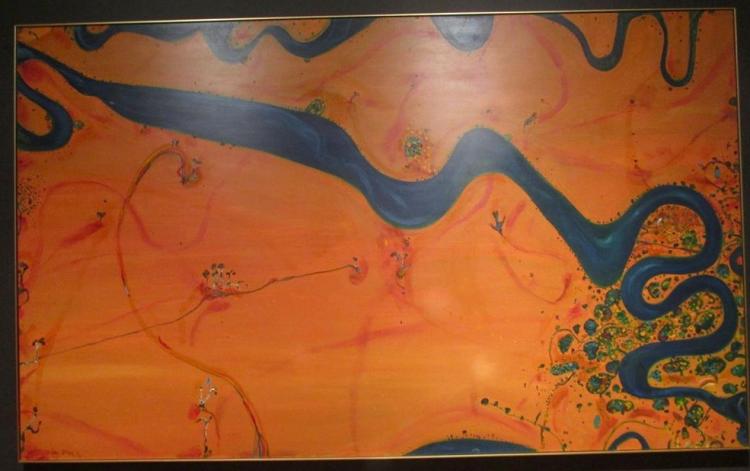 (ADELAIDE, AUSTRALIA) A painting by Australian artist John Olsen with an estimated worth of up to AUD$ 100,000 has been donated to the Art Gallery of South Australia by the family of Taib Mahmud, the Governor and former Chief Minister of the Malaysian state of Sarawak. This has been confirmed by the Art Gallery’s director, Nick Mitzevich.
In a letter to the Bruno Manser Fund, Mitzevich states that “Sitehost Pty Ltd, on behalf of the Hilton Hotel Adelaide, offered the work by John Olsen to the Gallery for our permanent collection in 2013. Originally John Olsen’s Meandering Murray and wattle was commissioned for the foyer of the newly opened Hilton Hotel in 1982.”

The Adelaide Hilton hotel was purchased by Taib Mahmud’s late wife Laila and their four children in January 1994 at a price of AUD$28.25 million. Today it is being directed by Taib Mahmud’s daughter, Jamilah Taib, her Canadian husband, Sean Murray, and two Adelaide lawyers.

An investigation by the Bruno Manser Fund showed that the Hilton purchase by the Taibs was funded by unexplained wealth brought into the company through offshore structures in the Isle of Man and the British Virgin Islands.

In its carefully worded letter, the Art Gallery of South Australia avoided to answer BMF’s question if they had known about the Adelaide Hilton’s connection to Taib Mahmud.
Last month, Adelaide University was forced to disclose under a Freedom of Information request that it had received AUD$ 400,000 in donations from Taib Mahmud during his tenure as Chief Minister.

The Bruno Manser Fund calls for all Taib family assets and donations to be returned to Sarawak.