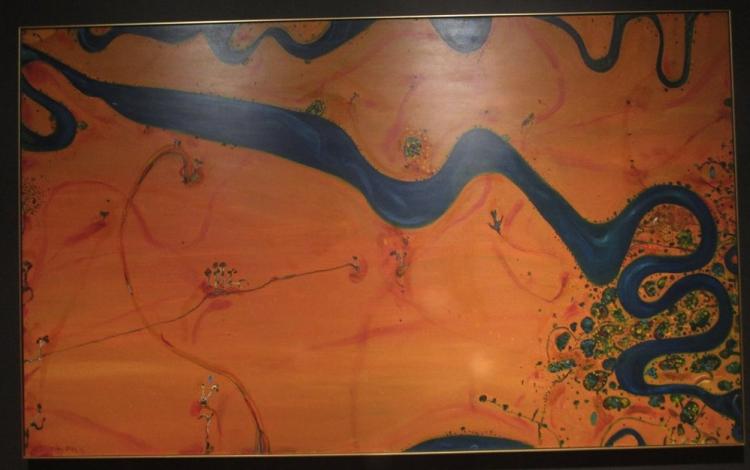 ADELAIDE (SOUTH AUSTRALIA) An oil painting by the Australian artist John Olsen has been donated to the Art Gallery of South Australia by a company linked to Taib Mahmud, a Malaysian politician accused of grand corruption and money-laundering.

The painting “Meandering Murray and wattles” was donated in 2013 by Sitehost Pty Ltd (“Sitehost”) through an Australian government cultural gifts program. The painting is estimated to be worth several $10,000. John Olsen’s most expensive paintings sold for over AUD $300,000 at major auctions.

Sitehost, which owns the Adelaide Hilton hotel, has recently been accused of money-laundering and various regulatory breaches. The company is owned by Taib’s children and a Taib family offshore trust in the British Virgin Islands.

A report by the Swiss Bruno Manser Fund disclosed in September that AUD $ 30 million of unexplained wealth had flown into Sitehost. The money is believed to be linked to corruption in Malaysia.

Subsequently, Australian corporate regulator ASIC commissioned a specialist team with a probe on Sitehost. The Australian Foreign Ministry and the South Australian Government referred the matter to the Australian Federal Police.

Last month, Adelaide University was forced to disclose that it had received AUD $ 400,000 in donations from Taib Mahmud during his 33-year tenure as Chief Minister of Sarawak. Taib Mahmud is currently under investigation for corruption by the Malaysian Anti Corruption Commission (MACC).

It appears that the South Australian lawyer and art collector, Michael Abbott QC, played a key role in Taib’s Australia relations. Abbott was Chairman of the Art Gallery of South Australia when the Gallery received the John Olsen painting from Sitehost.

Michael Abbott also assisted Adelaide University in a major fundraising drive with the Sarawak Chief Minister. From 2002 until 2014, he and Taib were directors of the Australian Universities International Alumni Convention, an Australian proprietary company.

The Bruno Manser Fund calls on the Art Gallery of South Australia to disclose the value and full background of the Taib donation to its collection and to restitute the gift to the people of Sarawak.