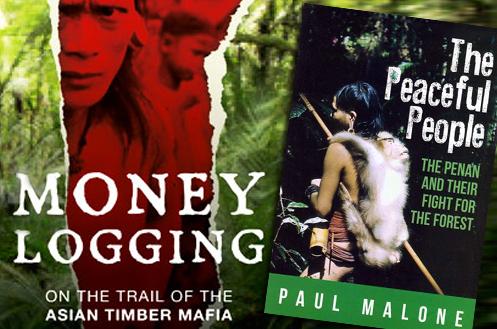 The Malaysian government is currently stepping up its efforts to stop a critical book on Sarawak governor Abdul Taib Mahmud. Earlier this week, the Malaysian delegation at the International Tropical Timber Organization (ITTO) managed to ban a book presentation by the Bruno Manser Fund at the ITTO’s 50th session in Yokohama, Japan. According to information received by the Bruno Manser Fund, the Malaysians acted “upon instruction from the highest level of government in Kuala Lumpur”. The BMF delegation has meanwhile left Yokohama as the decision on its admittance as observers remained unresolved even on the third day of the conference

Meanwhile, we have learned from the US-based Environment News Service (ENS) that their websites were attacked by Malaysian government hackers over a report on the book Money Logging: On the Trail of the Asian Timber Mafia by Lukas Straumann.

“Immediately following your press release announcing the book was transmitted, the ENS and World-Wire servers were severely attacked. Our security team traced the routing back to the Malaysian Government. They managed to shut our servers down for about for two hours (…).”

Crabtree added that the Environment News Service had meanwhile updated their security hardware and said the Malaysian attacks were “not much of a problem”, since ENS was set up for this kind of intrusion.

Meanwhile, due to a pending defamation complaint by Taib’s London lawer, Mishcon de Reya, Amazon is apparently delaying the delivery of book orders until 20 November. Interested readers are advised not to order through Amazon but through independent outlets.

Money Logging investigates what former British Prime Minister called ‘probably the biggest environmental crime of our times’ – the massive destruction of the Borneo rainforest by Malaysian loggers. Straumann singles out Abdul Taib Mahmud, current governor of the Malaysian state of Sarawak, as the kingpin of this Asian timber mafia, while he shows that Taib’s family—with the complicity of global financial institutions—have profited to the tune of 15 billion US dollars.

Money Logging can be bought from the following sources: