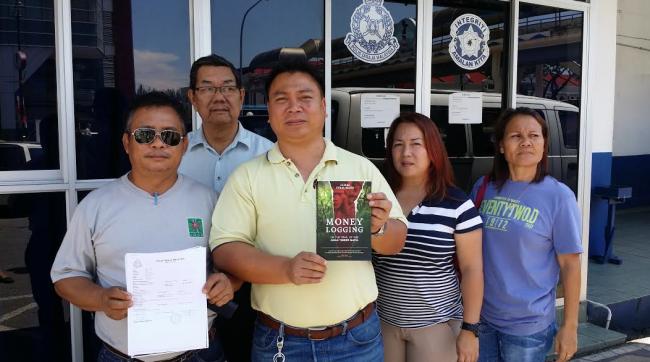 MIRI – 13 members of the Sarawak People’s Movement or Gerakan Anak Sarawak (GASAK) lodge separate reports to the police and the Malaysian Anti-Corruption Commission (MACC) on the alleged corruption and abuse of power of the current Sarawak Governor Abdul Taib Mahmud during his tenure as Sarawak’s Chief Minister and Minister for Resource Planning and Management.

GASAK spokesperson, Romould Siew headed the delegation to lodge the two reports this morning at the Miri MACC branch office and the Miri Central Police Station.

In the report, Siew stressed that the police and MACC should investigate and take action immediately on the allegations as written in the 300 page non-fiction paperback book as this involves not only the reputation of the present Governor but also the government of Sarawak and Malaysia as a whole.

According to Siew, “until today, Taib has not issued a formal denial or instituted legal proceedings against the book’s author, Dr. Lukas Straumann or its publishers which make us to lend credence that Taib is trying to hide something from the public.”

The book’s author have singled out Taib Mahmud as the “kingpin of the Asian timber mafia” who, during his tenure as Sarawak’s Chief Minister and Minister for Resource Planning and Management have profited and enriched himself and his family members to the tune of 15 billion US dollars or 50 billion Malaysian ringgit.

The book shows how Taib Mahmud managed to dominate politics in Sarawak for over three decades and how he abused his public office to exploit Sarawak’s natural resources and turn his family into billionaires.

“It has always been an open secret that Taib and his family members have been enriching themselves through Sarawak’s lucrative logging industry while he was still in power.

“However, it is very difficult to find concrete evidence to link him and his family members on the corruption and abuse of power that were done.

“Now with this detailed and meticulously researched book, the authorities should not find excuses that there is no evidence to persecute Taib”, explained Siew.

The book has already been launch in Malaysia last week and is set to hit the bookstores soon.

The book will also be launch internationally today at the 50th Session of the International Tropical Timber Council in Yokohama, Japan.