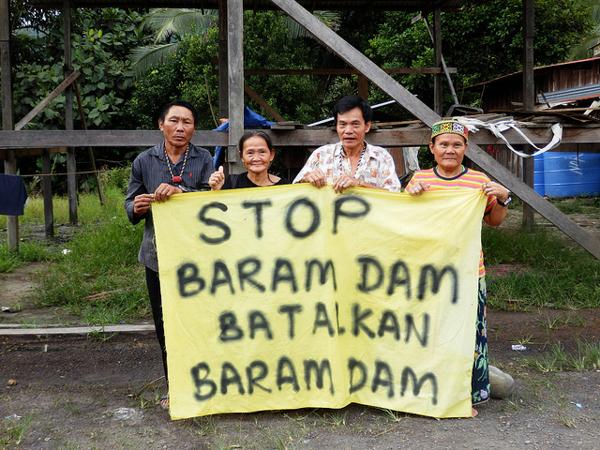 Miri – Jaringan Orang Asal Se Malaysia (JOAS), the Network of Indigenous Peoples of Malaysia, is dismayed that Sarawak Chief Minister Adenan is once again recorded in the Borneo Post as saying that the Baram Dam has the support of community leaders, while Sarawak Energy Berhad (SEB) CEO Datuk Torstein Dale Sjotveit is quoted as dismissing scientific studies that show Sarawak’s future energy demands could be met by relying on a mix of renewables as opposed to destructive mega-dams.

JOAS and its member organizations across the country urge the Sarawak government and state’s utility company to be accountable to the people they serve and uphold their
legal obligations to respect indigenous peoples’ rights.

“We appreciate Adenan took time to meet with our community representatives and researchers from the University of California’s Renewable and Appropriate Energy Laboratory. We hope he is genuinely open to dialogue and will not just plough ahead with ‘business as usual’ to build the mega-dams that SEB is prescribing. If the Chief Minister wants to show his accountability to the electorate, including us – the people of Baram – he will respect that we have not given consent for our ancestral lands to be submerged by the Baram Dam,” asserted Caroline Nyurang, co-ordinator of the Save Rivers Network Youth Committee.

JOAS President Thomas Jalong continued, “Today’s statement from SEB effectively holds Sarawak’s development hostage to the manipulations of a single corporation. Torstein has said power purchase agreements have already been signed with companies to consume power yet to be generated. It is as if he thinks SEB can move ahead with their agenda of damming our rivers and flooding our forests with absolutely no accountability to the people whose livelihoods depend upon the land.”

He explained, “It is time for SEB to publicly disclose who exactly are the customers purchasing energy and who are the bidders that will build these future power projects. We question how all of these companies have already duly submitted environmental and social impact assessments and obtained free, prior and informed consent from affected communities.”

“In light of these recent statements from the Chief Minister and SEB, we urgently remind them to review their obligations to respect, protect and fulfil rights outlined in the federal constitution and international obligations, including the United Nations Declaration on the Rights of Indigenous Peoples,” concluded Jalong.