On Tuesday 3 March, the President of the Human Rights Council presented the final list of candidates for special procedures mandate holders to be appointed during the Council’s 25th session.

The President of the Human Rights Council has decided to appoint Ms. Victoria Tauli-Corpuz from the Philippines for the position as the Special Rapporteur on the Rights of Indigenous Peoples, based on the recommendations made by the Consultative Group. 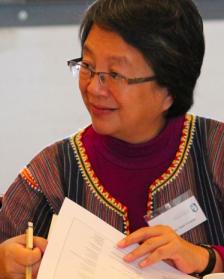 Ms. Tauli-Corpuz is the founder and Executive Director of the organisation Tebtebba based in the Philippines, which works in partnership with indigenous peoples’ organisations worldwide to ensure respect, protection, and fulfilment of indigenous peoples’ rights at all levels. She was one of the leading indigenous activists lobbying for the adoption of the Declaration on the Rights of Indigenous Peoples (UNDRIP) by the UN General Assembly, and she is the former chairperson of the UN Permanent Forum on Indigenous Issues (2005-2010).  [Vicky is also a member of the Board of Rights and Resources!]

The mandate of the Special Rapporteur on the Rights of Indigenous Peoples is to investigate human rights violations against indigenous peoples and provide recommendations to the Human Rights Council and governments around the world to improve their situations. We look forward to seeing Victoria Tauli-Corpuz take on this considerable task and to continuing our collaboration with her in the future.

When the Human Rights Council formally appoints Ms Tauli-Corpuz, she will be the third person to hold the position and the first woman on the post.