The Malaysian oil and gas company Petronas has been repeatedly criticized for secrecy surrounding the project and for its failure to disclose the exact line of the 500km long Sabah-Sarawak Gas Pipeline (SSGP). 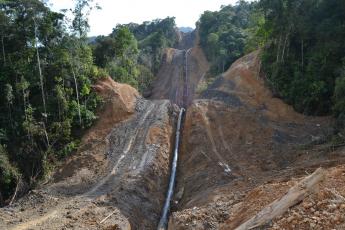 No less controversial than the gas pipeline are the plans of the Sarawak state Government to build 12 huge hydropower dams. The dams would flood more than 2’300km2 of tropical rainforest and would directly or indirectly effect an estimated population of 30’000 to 50’000 people. Despite strong protests, the Sarawak state government refuses to give up its plans. In early February, former Chief Minister Taib Mahmud said that two major new dams are going to be simultaneously constructed on the Baleh and Baram dam river.

The new Geoportal of the Bruno Manser Fund provides insight into Sarawak’s mega dam plans and the villages that would be affected by the implementation of the dams. The Geoportal is available not only in English but in Bahasa Malaysia too. This makes it easily accessible for everyone in Sarawak. 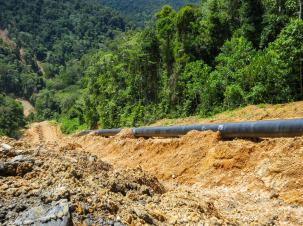 The Sarawak Geoportal in English: http://www.bmfmaps.ch/EN/composer/#maps/1001

To see the Petronas pipeline, click “Hydropower Dams and Energy” in the menu on the left and tick the box “Gas Pipeline Sabah-Sarawak”.

The Swiss-based Bruno Manser Fund (BMF) is committed to protect the threatened tropical rainforests and the rights of the indigenous forest peoples. The association’s focus lies on Sarawak, the Malaysian state in Borneo. The Bruno Manser Fund was founded by Swiss rainforest advocate Bruno Manser, who has been missing since his last trip to Sarawak in May 2000.