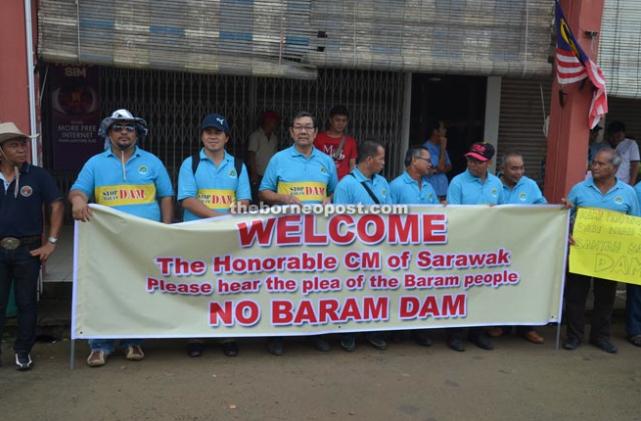 MIRI – The announcement by Sarawak’s Chief Minister, Dato Seri Adenan Hj. Satem for a moratorium of works by Sarawak Energy Bhd on the proposed Baram dam is commended especially by some of those who opposed the Hydroelectric (HEP) Dam in Baram. In connection with this, SAVE Rivers network is in the process of getting feedback from the people on the proposal by Adenan for the removal of the blockades against the Baram HEP.

The Chief Minister said that he had not made any decision on the construction of the HEP  yet.  He was aware that there were opposing opinions about the proposal and he was willing to listen to both sides before it is finalised. So, for the time being, he was willing to instruct SEB to halt all works on the proposed HEP. Adenan’s request to the people is for the removal of the blockade they placed in stopping the preliminary works for the HEP.

The announcement was made in Long Lama, Baram on 30th July 2015, where Adenan officiated the laying of the foundation stone for the proposed Long Lama Bridge. Notably present at the event were around 500 villagers from various settlements in Baram who joined in welcoming the Chief Minister while peacefully protesting against the Baram HEP.

SAVE Rivers said that they are willing to facilitate meaningful discussions with the relevant authorities in order to find a “people focused and environmentally friendly” development process for Baram. On SAVE Rivers’ response to the announcement, the Chairman of SAVE Rivers, Mr. Peter Kallang said, “We will discuss with the people from Baram regarding the proposal for removing the blockade.” He said that as an organisation Save Rivers’ role is to support the people.

“There are various matters to be considered, before that; one example is the fact that the Native Customary Right Land (NCR) for the proposed site of the HEP and its reservoir are already gazetted as state land.” Kallang was referring to a number of gazettes already issued by the Minister for Resource Planning and Environment to extinguish the rights of ownership for NCR land and which are now designated for the HEP and supporting infrastructures. “These lands which include homes and farms are now legally belonging to the government,” Kallang continued, “among others, these things must be considered.” However, Kallang is confident, that with the right attitude it is possible to find an agreeable solution.

SAVE Rivers is a grassroots network of indigenous communities and civil society organizations in Sarawak, working to protect human rights and stop destructive dams in the state.