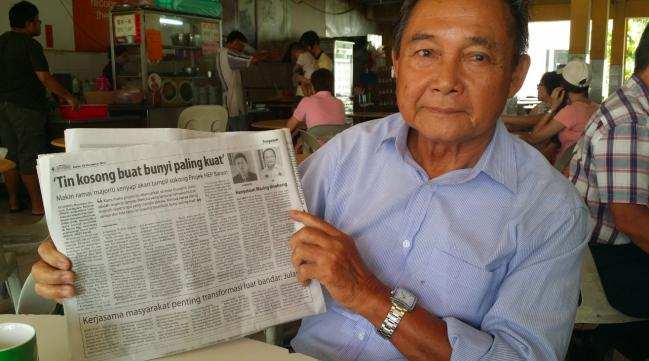 MIRI – Save Sarawak Rivers Network (SAVE Rivers) is disappointed with Penghulu Paul Kalang, the Community Chief of the Kenyah in Telang Usan, Baram for making sweeping and irresponsible statements in an article in the Borneo Post today, with regards to the proposed Baram HEP Dam project and abusing the Sarawak National Kenyah Association (PKKS) for his own personal gain by saying that the „silent majority‟ are supporting the said project and only a minority are making noise to protest against it.

Anthony Lawai Karing, one of the residents from Long San said that the majority of the people in Long San reject the dam project.

Long San is one of the villages that is directly affected by the proposed Baram HEP Dam project, and also where Penghulu Paul is from.

“It is very irresponsible for the Penghulu to make such statements when he himself has never made an effort to meet with his own people in Long San to discuss the issues and problems with regards to the dam”, said Anthony Lawai.

“Whenever we have a community meeting or event in Long San to discuss about the dam issue, the Penghulu refuses to attend.

“How can he be a good community leader when he refuses to meet with his own people?”, Anthony question.

“A responsible community leader should not run away from his people when a problem arises, but instead should listen to them and bring it forward to the government. If they do not want to listen to the peoples‟ problem, they should immediately resign from the post,” stressed Anthony Lawai.

Thomas Jalong, the President of The Indigenous Peoples Network of Malaysia (JOAS) and also a PKKS member slams Penghulu Paul for abusing PKKS for his own self-centred and personal agenda.

“He is only making sweeping statements without consulting the members of PKKS. Those are his own personal comments and it has nothing to do with PKKS”, said Thomas.

“PKKS has never called for a meeting, either in their Annual General Meeting (AGM), Extraordinary General Meeting (EGM) or committee meeting to come up with a resolution for the Baram Dam issue.

“Penghulu Paul has failed in his capacity as a Community Chief to listen to the grouses of the people that he is administering. He has never made an effort to meet with the affected communities / longhouses or even set foot at the blockade at KM15 to listen to the protesters there”, said Thomas.

SAVE Rivers also views that not all of PKKS members support the said project. Also not all Kenyah are members of PKKS.