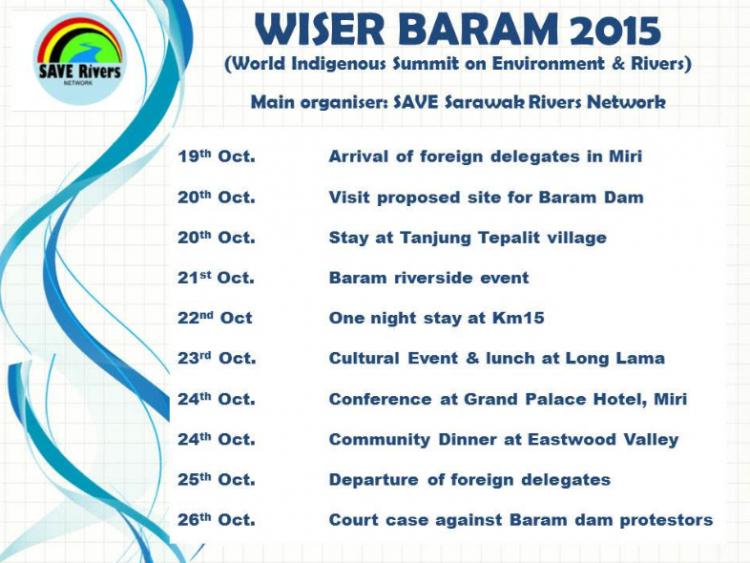 SAVE Rivers is working with local and international partners in a campaign to stop the government of Sarawak from building 12 mega-dams. If they are built, these dams will force tens of thousands of communities off of their land, drive untold species to extinction, pollute the rivers — the lifelines of the jungle — and produce more greenhouse gas emissions per megawatt of energy than a coal-fired power plant. The Sarawak dams are not an isolated case: mega-dam construction is a global issue, affecting indigenous and marginalized communities around the world. In the spirit of collaboration and solidarity, WISER will bring these populations together to generate global awareness and strengthen connections between river communities.

In 1998 around 10,000 Indigenous people in Sarawak, a Malaysian state on the island of Borneo, were moved out of their ancestral lands and into the resettlement village of Sungai Asap to make way for the Bakun hydroelectric dam, Asia’s largest dam outside China. As is the case of many resettlement schemes around the world, they were promised a better life: better schools and housing, access to health care, and adequate farmland. More than 15 years later these families are still struggling to make a living and Sungai Asap has been declared a resettlement disaster.

The Sarawak government is now proposing to build 12 more hydroelectric dams, creating similar risks for tens of thousands of Indigenous people, who make 48 percent of the state’s population and comprise many distinct ethnic groups, including Penan, Iban, Kenyah, Bidayuh, Kayan, and Ukit. These communities know what has happened to the people of Sungai Asap, and they are fiercely fighting against the dam construction in order to protect their communities and livelihoods.

The 1,200 megawatt Baram dam, the next dam in line to be built, is facing tremendous resistance from local communities. If the dam is built, up to 20,000 Indigenous people living in more than 26 villages will be displaced. The Sarawak government has already started building access roads to the dam site, although the project has not yet been formally approved. However, since October 2013 Baram communities have continuously managed two blockades that have prevented construction of the dam.

In the past six decades large dams have forced some 40-80 million people from their lands, according to the World Commission on Dams. Indigenous, tribal, and peasant communities have been particularly hard hit. These legions of dam refugees have, in the great majority of cases, been economically, culturally and psychologically devastated.

WISER BARAM 2015 will bring anti-dam activists from around the world to collaborate, build solidarity, raise awareness about mega-dams, and make a lot of noise for the 2nd anniversary of the Baram Dam Blockades in October, 2015. We are coordinating with communities and NGOs on the ground, international NGOs, and communities fighting dams all over the world to host a week-long event to raise international attention and forge connections between grassroots organizations experiencing similar struggles.

The conference will have 2 main sections: a visit to villages and the two blockades sites with an event at the Baram Dam Blockades for their 2 year anniversary, and a more typical conference in the city of Miri. There will be travel on the river by boat and on logging roads by SUVs/4x4s. All of our international activist guests will have an opportunity to speak about their experiences and engage in discussion with other activists, including smaller break-out discussions between activists to discuss strategy.