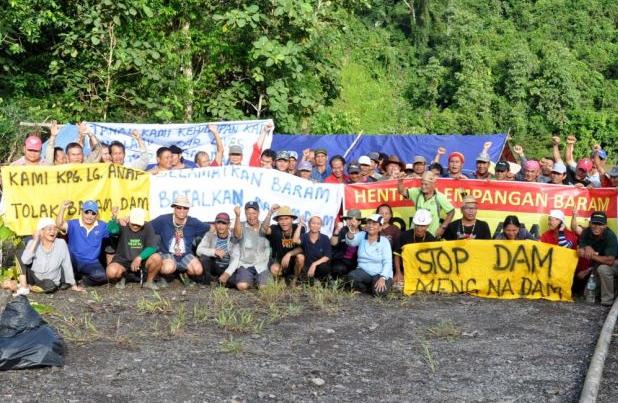 MIRI – Save Sarawak Rivers Network (SAVE Rivers) view the actions of the Sarawak Forestry Corporation enforcement officers (SAPU) together with the police to collude with a company doing illegal logging to dismantle the blockade at KM15 Long Kesseh, Baram as plain disgraceful.

What is more shocking is that the one of the officers from SAPU by the name of Ahsan Odau claims he has the authority to dismiss the native customary rights (NCR) claims of the Kayan community of Long Kesseh, that the logging company has absolute rights to log the area and order the police to arrest the Baram Dam protesters that erected the blockade there.

Yesterday, at the Miri Sessions Court, one of the managers of M.M. Golden Sdn. Bhd., Teng Yek Foo, and a boat operator, Laseh Seling was found guilty of trying to bribe the Malaysian Anti Corruption Commission (MACC) officers to not report their illegal logging activities at Long Kesseh.

M.M. Golden was extracting Tapang and protected species of trees within the area of Long Kesseh, especially at the proposed site of the Baram HEP Dam without the proper permit from the Forestry Department.

M.M Golden is the sub-contractor to Autorich Sdn. Bhd., which claims to have the licence to log the said area, but now this so called logging license of Autorich has come under question as to how the Forestry Department can issue a logging licence over logged over areas without an Environmental Impact Assessment (EIA) done, as required by the law.

SAVE Rivers once again strongly demands that M.M Golden and Autorich and/or its agents and/or contractors to immediately stop their illegal logging activities and leave the site.

SAVE Rivers demands that action be taken if M.M. Golden and Autorich if they are logging illegally at the said area.
In connection with the illegal logging and endorsement by the Forestry Department, represented by their officer, Ahsan Odau, a police report and complain to the Malaysian Anti-Corruption Commission in Miri was made by Anyie Eng from Naha’ on the 28th Oct requesting the authority to investigate the illegal said illegal logging and the involvement of the Forestry Department.