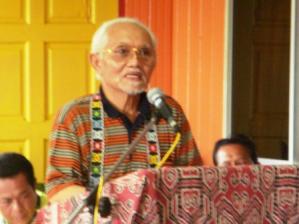 Taib has not only been caught out bribing voters, but also admitting to his vast wealth!  The illegal act and the confession were both captured in a video recording of an election speech that has now come into the possession of Sarawak Report.  In the recording he tells his audience:

“I’ve got more money than I can ever spend, so I don’t worry about money.  All my children now look after [my money], so I am giving you something very nice”

Later he makes a direct offer to bribe the audience of longhouse voters, who he was visiting during the Sibu by-election:

“I am prepared to give you 600 ringgit per [longhouse] door, normal thing right, no change.  People have said that’s a lot of money.  I have many friends all over the world. They are in Germany, Japan, China. We can talk, ask them to invest here.”

He boasts about his wealth

“More money than I can ever spend” –  vindication of Sarawak Report

The footage was taken while Taib was doing the rounds of the longhouses during the recent Sibu by-election, where he in fact suffered a shock defeat.  It shows the aging politician employing his tried and tested method for winning seats, without realising that time and technology has moved on.  He should have known that what you say in public these days gets recorded!  In response, Sarawak Report would like to thank him for his statements, which we regard as a vindication of our accusations over the past weeks and a full confession of his corruption.

His remarks admitting he has accumulated “more money than I can ever spend” out of abusing his position of power in Sarawak, were recorded on cheap equipment by observers in the audience, who say that he repeated the same claims and offered the same bribe of 600 ringgit per door (longhouse family) numerous times as he visited different communities.

In so doing he has demonstrated that while he officially disguises the fact that he is the real owner of his family’s fortune by using his siblings and children as nominees, he still thinks he can get away with bragging about it in public, especially when he is trying to impress voters he wants to bribe.

However, this time he did not get away with it.  In Sibu the voters knew full well that he was trying to bribe them with their own money, having stripped them of their lands and taken the profits.   Their message to the Chief Minister after this speech in June was that if he has more money than he can ever spend why is he still seeking to stay on in office and make yet more money out of Sarawak?  This message needs to be repeated by all the voters at the State Election and the Federal Election.  The opposition coalition wants to end Taib Mahmud’s illegal plunder of the State of Sarawak!

Sarawak Report has produced a transcript of what the Chief Minister said in the recording, which was spoken partly in Malay and partly in English with some Iban, in a speech to a crowded longhouse.  While the audio is not good, it is perfectly possible to make out his words.

False promises and dreams of ‘development’

Apart from his admissions, the Chief Minister concentrated the rest of his speech on trying to entice the longhouse folk into surrendering up their remaining native lands to the State.  His excuse is that he will then be able to develop a grand ‘Master Plan’ that he claims will provide them with amenities and development.   But, over the last 30 years Sarawakians have all heard these promises many times before.  Many have surrendered him lands and received nothing.  Sarawak is the richest State in Malaysia, but now holds many of its poorest and most backward people, thanks to Abdul Taib Mahmud.

Yet, in his speech the Chief Minister tries to blame the people for their predicament!  Instead of showing sympathy and appropriate guilt, he blames them for not giving him MORE of their resources.  He also suggests that it is their traditional way of life that is holding them back.

He scolds his audience to “stop their old customs” and abandon “cultivating hill rice”, because it is “no progress and no benefit”. Instead he tells them to “go for a Master Plan” and “give the mandate of the land to the Government!”.

Sensibly, the people of Sibu rejected Taib’s suggestions.  Sarawak is littered with failed ‘Master Plans’ where only a few Taib cronies and family members made a profit.  After 30 years the people know that the only “progress and benefit” Taib really cares about relates to that of his own bank account.  To give him their land is to lose it.