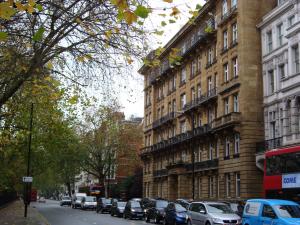 It is undoubtedly one of the smartest addresses in London.  Hampshire House is an enormous and gracious period building overlooking the world-famous Hyde Park, just a stone’s throw from Marble Arch and Oxford Street.  It contains some of the largest apartments in the capital, including the regular ‘pied a terre’ of Chief Minister Abdul Taib Mahmud.

The ground floor apartment used by the Taibs is worth around £8.5 million (RM 43 million) and measures over 4,000 square feet.  A sense of its grandeur can be gained by looking at the pictures of a neighbouring flat that was recently put on the market at this price.  All the Taib family are known to regularly use the building and it is likely that they own or have access to more than just one of the flats, since so many are able to reside there at one time.

Detour on the way to Haj! 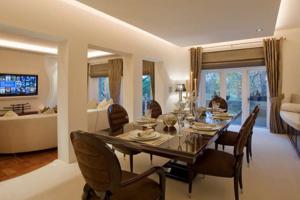 Indeed we can report something that was not mentioned by Sarawak’s tame media on Tuesday, when Taib’s departure from Kuching to perform Haj was extensively covered.  Instead of going straight to Mecca, the Chief Minister in fact came directly to his luxurious Hampshire House in London, which is an over-shoot of his nominal target by several thousands of miles.  The decision to go to the UK first will have shortened his advertised pilgrimage by a number of days.

Sarawak Report has learnt that one reason for the detour was that the Taibs had planned a major family reunion before going on to do their pilgrimage.  The day before the Chief Minister himself arrived, staff at Hampshire House were in full preparations and our information suggests that the family have decided to stage a’ coming together’ to try and repair some of their public feuds and rivalries.  It is believed that this is an attempt by the Chief Minister to present a united family front as he gets ready to appeal to increasingly fed-up voters in the coming election. 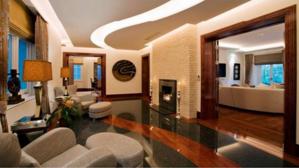 Even Onn Mahmud, the brother who had once acted as Taib’s closest business fixer, but then fell out with him, has been included in the gathering.  Onn, who was directly implicated in taking millions of dollars in timber kickbacks by the Japanese authorities, has barely spoken to many members of the family for years and has been excluded from Taib’s inner circle.  The plan for this event was that family members should ask for each other’s forgiveness and make amends with each other, before travelling to Mecca to ask forgiveness of Allah.  They are clearly hoping that this idea of forgiveness will also catch on with the voters of Sarawak. 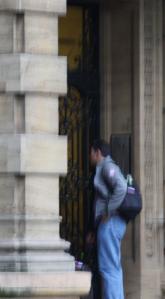 Sulaiman Rahman Taib, photographed arriving at the gated entrance of Hampshire House on Tuesday 9th November the day before his father's arrival.

However, there is likely to have been another compelling reason behind the Chief Minister’s decision to visit his Hyde Park mansion on the way to Mecca, as he may have been meeting his son.  The day before his arrival a Sarawak Report photographer spotted the Chief Minister’s absent son, Sulaiman Rahman Taib, arriving in a black chauffeur-driven Mercedes and slipping into Hampshire House, where he is apparently staying.

Sulaiman Taib has failed to appear in public in Malaysia for the entire past year, despite his role as a member of the Federal Parliament, which has been the subject of considerable speculation and concern.  However, the Taib family has refused to make any statement as to his whereabouts. He has not appeared in his constituency or set foot in Parliament, which is a blatant neglect of the public duties for which he is handsomely paid.  Indeed his extraordinary disappearance has sparked several rumours that he might be dead or under-going treatment for a disease, which the family is unwilling to discuss.

So Sarawak Report is pleased to be able to perform a public service in confirming that the Chief Minister’s son is alive, appears well and presumably drawing his salary in London.  In fact ‘Rahman’ has been spotted a number of times in and around London over past months and it is certainly open to speculation that he is indeed benefiting from Britain’s advanced medical skills in the treatment of a number of diseases that might not receive the necessary expertise in Sarawak or Malaysia. 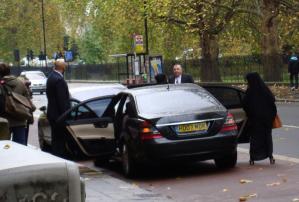 Rahman's driver left opens the door for more passengers after assaulting our photographer. Pictures of the assault have been made available to the police.

However, it is clear that despite their public position, the Taibs do not appreciate our publicising of their whereabouts or possessions.  Rahman Taib spotted the young female photographer and clearly pointed her out to employees, who came out of the building to identify her.

A short while later the driver of his car assaulted her in the open street as she attempted to take more photographs of female passengers leaving the building and entering his car.  The Taib driver grabbed the young woman by the neck and forced her to erase her photographs until she was rescued by an onlooker.  The matter is now being investigated as an assault by the police.  This kind of brutality,although regularly meted out to members of the public under Taib in Sarawak, is strictly prohibited in the UK.

Late on Tuesday the photographer believes she also spotted the Chief 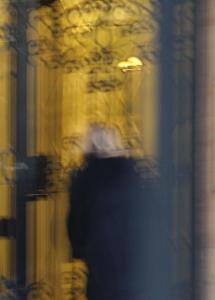 Taib slipping in at dusk?

Minister entering the building himself  not long after his Singapore Airlines flight touched down in Heathrow.  Sarawak Report would like to invite any readers who might have better photos of the Chief Minister going in or emerging from Hampshire House, 12 Hyde Park Place, London W2 to send them to us and we will be pleased to publish them.

Who owns the multi-million pound flat?

Sarawak Report would also be interested to know exactly who owns the ground floor flat which is so frequently used by the Taibs and which appears to be the current home of Sulaiman.  According to the official Land Registry the public owner of the property is Sultan Abdul Halim Mu-Adzam, the Malaysian contact of the Taibs who invested Onn with his title of Datuk.

The relationship between the two families and who really holds the possession of one of London’s smartest properties is clearly a matter of public interest.  The Chief Minister, given his official salary over the past 30 years, should never be able to afford such a residence, yet in fact this is just one of a string of such properties that the Taibs do own.  Taib himself has been recorded saying “I have more money than I can ever spend”. 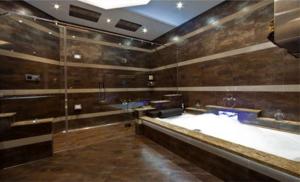 Cleansing - a bathroom at Hampshire House

The Chief Minister is also known for attempting to hide his real ownership of companies and properties behind the names of others who have privately agreed to hand over their control of the assets via covert deals that give Taib ultimate control over the wealth of his family and friends.  Sarawak Report has proven a number of cases where the Taibs use such nominees to hold their shares secretly in trust and this includes Abdul Taib Mahmud.  The confused ownership of mansions handed to the Taibs by Samling in the United States is another example of tactic, which was previously exposed by Sarawak Report.

So, does the Hampshire House residence in fact belong to the Taibs, while being registered under the name of a friendly sultan?  If not and the property is indeed that of the Sultan, why does he allow the Taibs to treat it as their own?   A statement from the Chief Minister on this and all the other matters we have raised with regard to his staggering but inexplicable wealth would, as ever, be truly appreciated.