In a recent online interview YB Peter Nansian, an Assistant Environment Minister in Taib’s cabinet and State Assemblyman for Tasik Biru, wrote “I went into politics to strive for the people..if you come to my area.. all the main roads and other infrastructure are already in place..I always think of how to further develop the area and its people”.

However, what his readers and constituents might not have picked up on is just how much of such publicly-funded construction is carried out by the enthusiastic YB himself!  Indeed, after a hard day’s work in Taib Mahmud’s cabinet he must have to rush home to get on his hard hat in order to oversee the hundreds of millions of ringgit worth of public projects that his company, Juara Beetuah Sdn Bhd, has been commissioned to carry out.

Perhaps it because of his over-loaded schedule that this minister seems to have forgotten that it is criminally corrupt for holders of public office to operate private companies that directly benefit from the awarding of contracts by their own government?

Peter Nansian is clearly identified in Malaysia’s Construction Industry Development Board’s list of registered companies as a Director of Juara Beetuah, a construction company that has received numerous government contracts worth hundreds of millions of ringgit! [ http://www.cidb.gov.my/directory/local_contractor_details.php?cont_id=28898 ]

Director of the company Juara Beetuah. Getting listed in the CIDB Directory is crucial for companies seeking government contracts.

Furthermore, the address and contact details for Juara Beetuah, as laid out in the CIDB website are the same as those given by YB Peter Nansian in his Wikipedia online entry.

This is where you can find me. YB Peter Nansen's Wikipedia entry confirms he is based at 'Champion Beetuah', English for Juara Beetuah!

But it is the sheer scale of the public contracts that the YB has been awarded by his own BN ruling coalition that causes real astonishment.  Juara Beetuah is registered as having received a total of 10 public contracts since the year 2000 with a total worth of RM350 million ! 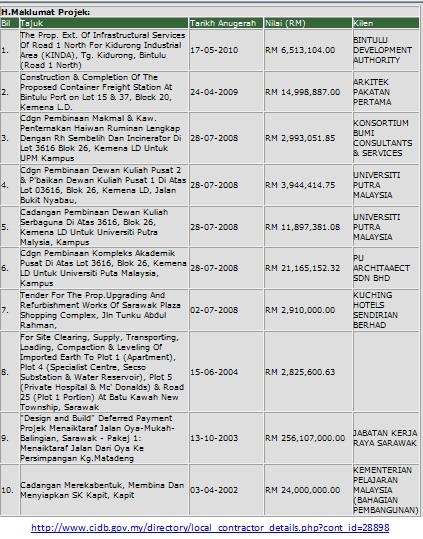 YB Peter Nansen's public construction projects! Total value of around RM350 million. Note that project No 9, which is a road from Oya to Balingian is worth RM256 million alone.

Constituents, whom YB Peter Nansian has tried to assure he has been working hard to support, may care to notice that these projects do not include developments in his own area! There is a further concern however, that many of these contracts, awarded behind doors by the BN government to its own ministers in blatant disregard to the conflict of interest, are in fact just ‘skimming’ opportunities.  This means that while contracts are initially handed to ministers, these fellows in fact have no idea how to construct a tin shed let alone a major road project.  So they are quickly sub-contracted on to crony companies like HSL for a far lesser amount, leaving several millions of Sarawak’s state monies in the lap of the ministers concerned.

We would like to challenge YB Nansian therefore to demonstrate that he does in fact possess a genuine construction company with staff, including himself, who are qualified to carry out the jobs that he has taken on for all these millions of ringgit.  We would like to see his skilled employees at work and we would like some evidence of plant and machinery!

Without his cooperation, we have so far been unable to find pictures of YB Nansian (who qualified as a Chartered Accountant) in that hard hat or anywhere near a construction site!  However, we have found plenty of examples of press announcements that show that Juara Beetuah has entered into a number of consortia with HSL where it has received a 5% share of government contracts awarded for an unspecified role in the project.  This has been a regular way by which Raziah Mahmud’s similarly shadowy construction companies have received money from public projects that have passed unaccountably through her hands, thanks to decisions by her brother the Chief Minister. 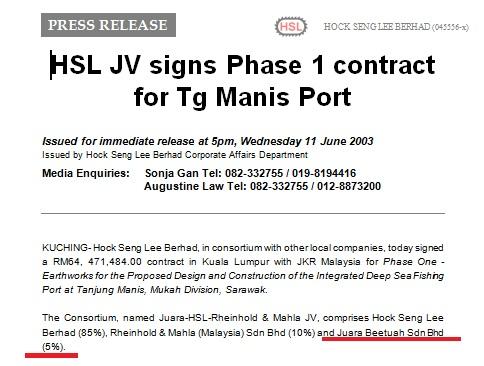 What role does Peter Nansian's company play is such contracts?

With so little evidence of actual work by YB Nansian’s company we are interested to know how he has managed to raise a huge range of loans, which are registered under the company’s name.  A total of 13 loans are registered against Juara Beetuah since the year 2000 and they amount to RM 472 million ringgit!  None of these loans have been satisfied. 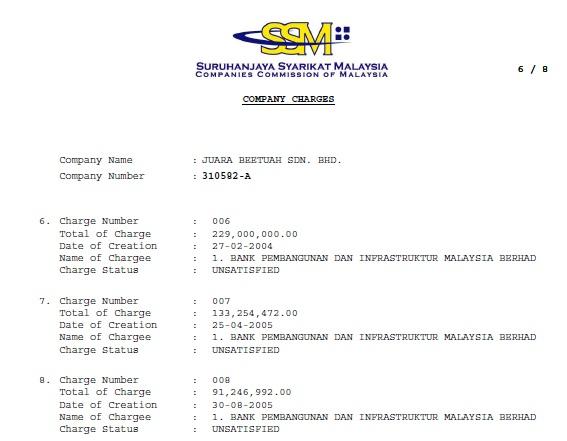 Just some of Juara Betuah's loans

However, the various banks involved are perhaps comfortable in the knowledge that YB Nansian, with all his good connections and clearly no scruples about hijacking government contracts, looks likely to do well out of a new set of development opportunities that are currently being announced by the Federal Government for Sarawak as the election approaches!

Money for the election

Just yesterday Awang Tengah (2nd Minister of Planning and Resource Management) announced that RM5.2 billion has been allocated for building rural roads, water and electricity supply under the National Key Results Area (NKRA).  This is designed to be exciting for rural voters who have been waiting for basic amenities for 30 years under Taib’s government.  But, of course, it will be even more exciting for all Taib’s cronies who will be able to siphon contracts and cuts for themselves as the money gets handed out.  How much will be actually spent on ‘projects’ is any one’s guess, but the rural voters should know by now that they will receive very little indeed!

Tenga denied that BN was using government money as part of its electioneering, but then added that:

“it is important for Sarawakians to ensure Sarawak BN remain in power in this coming election to enjoy uninterrupted development!”.  [Awang Tengah 12/03/11]

On the same occasion he humiliatingly handed out cheques in public to people receiving ‘compensation’ for the removal of their lands!Tenga took the opportunity of the occasion to urge Sarawakians not to listen to “the accusations and lies”  against the BN government.  Therefore Sarawak Report requests BN’s politicians for the umpteenth time to bring forward evidence that accusations that have been made are ‘lies’.

We have laid our evidence in this report.  They could start by answering whether or not YB Peter Nansian has been receiving major government contracts worth hundreds of millions of ringgit through his company Juara Beetuah?