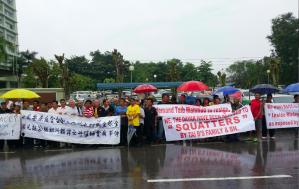 Don’t you dare call us “Squatters” in our own lands!

The people of Julau who saw themselves victimised on the devastating film expose by Global Witness last week have come out in fury to protest at the secret disposal of their Native Customary Rights lands to Taib’s family members.

PKR front-runner in the area, Andy Wong, made a police report on the 23rd of March, followed by a report to the MACC on the 26th of March.

On the same day Andy and many from the PKR Julau Branch attended a demonstration against the alienation of their land to the greedy daughters of of the former Chief Minister, Rahman Ya’kub, who are cousins of Taib Mahmud.

There is particular fury that not only did the sisters boast that they could be certain of their right to take the land, because the Chief Minister “gave” it to their company Ample Agro Sdn Bhd, but they described the traditional native landowners, who have lived in the area for generations as “squatters”.

“They are actually squatters on the land, because the land doesn’t belong to them it’s the government land, so they’re squatting”, 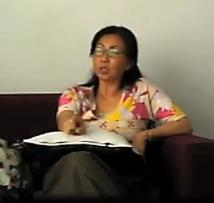 “Actually, they are squatters on the land” – Norlia Abdul Rahman brushes aside native land rights standing in the way of her planned multi-million dollar profits

says the eldest sister Norlia, who seems to think somehow she instead has a right to it, because of her favoured position as a relative who can easily talk to the Chief Minister.

Adding insult to injury her younger sister Fatimah further insulted the local people of Julau by saying they were “naughty” for wanting compensation for the grabbing of their recognised rightful native lands.

“You know they are pretty naughty people. They try to make money, the moment they hear (they have people in the Land and Survey Department who tell them look this land has been given, has been titled to this company to do oil palm or what not) they plant themselves there” [Fatimah Abdul Rahman]

In their interview with the NGO Global Witness, which was secretly filmed, the sisters explained that they had set up the Ample Agro as a “shell company” to act as the vehicle whereby Taib could hand them the 5,000 hectares of forested land registered as native customary rights land in Julau. 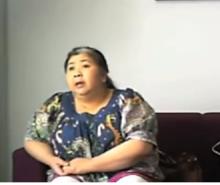 The Chief Minister “handed” us this land, Fatimah Abdul Rahman is registered Director of Ample Agro

One of the sisters Fatimah Abdul Rahman is registered as the contact for Ample Agro, as we had already reported.  Our research into leaked Land and Survey Department records has shown that hundreds of thousands of state and native customary rights land have been given out in concessions to various members of Taib’s family.

Ample Agro is just one example of scores of companies owned by the Chief Minister’s family, friends and nominees, which have been handed this land cheap and then swiftly sold it on at the much higher market prices to plantation companies.

At the price the Abdul Rahman sisters were asking for the land they would have made US$16million profit from the sale, which was a sign of how cheaply Taib had handed them this valuable property belonging to the native people of Julau. 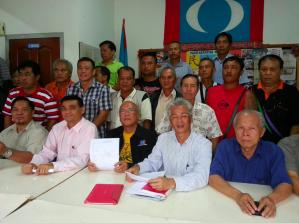 The biggest handouts of all have gone to companies belonging to Taib’s own son Abu Bekir Taib and to his cousin and proxy Hamed Sepawi.  Companies like Titanium Management (Abu Bekir) and Grand Perfect (Hamed Sepawi).

The Chief Minister himself has developed his own interests in a number of land grab concerns through another company that has received substantial interests in various property handouts, namely as a shareholder in Mesti Bersatu Sdn Bhd.

However, his main profits have come through secret kickbacks and nominees.

Time and again these land grabs have been challenged in court over the past few years and time and again the State of Sarawak and Chief Minister have been found to have acted illegally in grabbing land this way.

However, acting as a self-appointed sultan (the cousins described their family as ‘kings’) Taib has chosen to ignore the ruling or appeal against them rather than do the right thing by the Dayak of Sarawak.

The enraged people of Julau say they will not accept that their land was secretively and illegally taken from them and handed to a company owned by the greedy and insulting Abdul Rahman sisters and that they will be bringing their protests to Kuching in coming days.