1MDB Reporting Has All Been Vindicated - So How Come The Growing Media Crackdown In Malaysia?

In the process of declaring himself ‘cleared’ (thanks to his appointed AG refusing to press the charges recommended by the country’s independent anti-corruption investigators) the Prime Minister vindicated all the year long reporting by this blog and others on 1MDB.

So why are the Malaysian authorities EXTENDING their media bans against a growing number of prestigious websites, rather than removing restrictions on portals like this one, which far from ‘propagating falsehoods and slander’ have now been proved entirely correct by the PM’s own admissions?

Medium is a global platform for independent journalism and it too was blocked last week for hosting stories by Sarawak Report.  Widespread international coverage has documented the website’s blunt refusal to respond to demands by the Malaysian Media authorities (MCMC) to remove Sarawak Report stories without providing any legal or factual basis for doing so [see one such article base of page].

Rights groups are condemning the censorship

The Malaysian public are once again the losers here, since their access to independent information, as opposed to Najib’s propaganda, has been further restricted.

There have been other such violations of free access to balanced reporting over the past hours, as Malaysia’s notorious TV ‘News Controllers’ have swung into action to prevent foreign news coverage prejudicial to Najib entering the Kampungs.

Just today, local bloggers have found themselves blocked without a word of warning from MCMC. One puzzled blogger rightly pointed out that:

“They (MCMC) should have issued a notice first or call me up… If their warning goes unheeded, then go ahead and block. Now, years of my hard work will go to waste. Surely the government can’t be this ruthless?”

The irony is that what the media authorities are presently banning on the grounds of being ‘falsehoods’ have this week been confirmed to be entirely true by the Prime Minister’s own admissions.

He and his AG officially admitted he had taken the RM2.6 billion, but explained it was all innocent and above board, without providing the slightest evidence to back up this claim.  All fine and dandy when you are your own judge and jury in the matter! 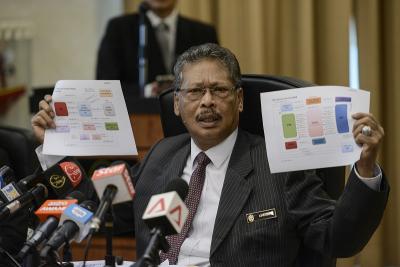 AG Apandi may have ‘cleared’ Najib but many Malaysians remain unconvinced

The PM also admitted he had taken millions from SRC (pension fund money) but said he hadn’t realised it was from that source and had thought he was taking money from the mysterious RM2.6 billion ‘donation’, which he now claims was from a member of the Saudi Royal family. So taking the money was an honest mistake and not his fault apparently, as somebody else unknown had put it into his accounts from the wrong place.

He also admitted that he had sent most of that RM2.6 billion out of the country after the General Election in 2013, however he claimed that this was because he had sent it BACK to that mystery Saudi.

Funny that, because it was a whole year later in 2014/15 that that he took the money from SRC, which he claims he thought had come from that donation!

So, Sarawak Report, The Edge, The Wall Street Journal and others reported entirely correctly according to this week’s official admissions by the PM himself.  It is these media who have themselves been libelled by Malaysian Government officials and their teams of sleazy bloggers, like ‘RPK’ who makes up stories on the back of instructions from Rosmah. 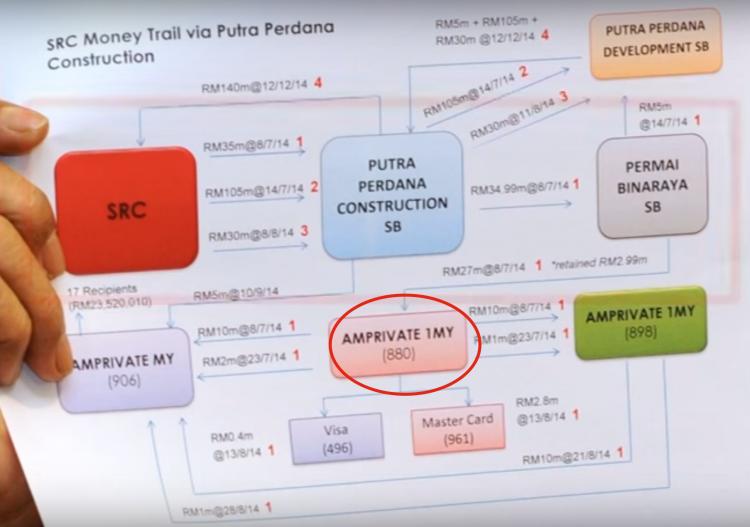 On top of that, AG Apandi’s injudicious waving of MACC documents has even proved that the original charge sheet printed by Sarawak Report against the Prime Minister back in July was correct – there in his very own hand was the same number of the account cited in the charge drawn up by Kevin Morais for the former AG Abdul Gani Patail. 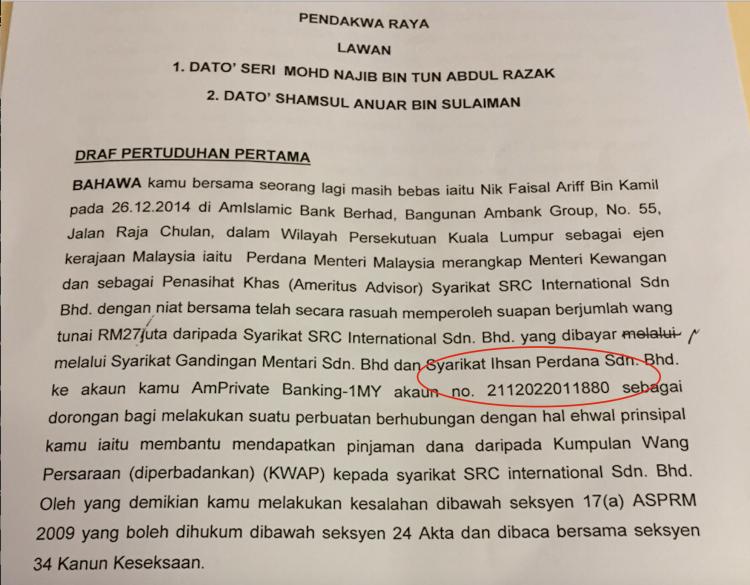 AmBank account 880 – cited in the charge sheet printed by SR. This triggered the warrant for our arrest and the requests to INTERPOL, but Apandi has proved it was correct after all!

All this comes the same week that Amnesty International, Human Rights Watch, The International Press Institute and Transparency International have condemned the crackdown on freedom of expression and Najib’s response to 1MDB investigations in Malaysia.

Malaysia’s own law group Lawyers For Liberty have also today called the move ‘undemocratic’, ‘counter-productive’ and ‘a desperate attempt to stem the flow of critical news and information’.

It all begs the question, why didn’t Najib Razak just admit the whole business way back at the start of last year and present all his admittedly lame excuses openly to the public at the time, rather than clamping down on Malaysia’s media? 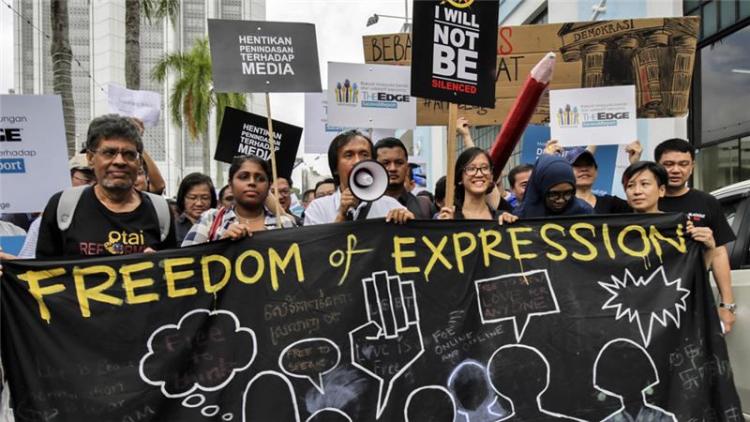 For further reading we share an article written by one of the many international websites covering censorship in Malaysia over the past couple of days.

We’ve seen an increasing effort by governments around the globe to censor content they don’t like. This takes many different forms, but one fairly typical one is for governments to send official looking documents to websites and webhosts demanding that certain content be taken down. Many smaller companies, often with no official policy in place on how to handle such requests, will cave and just take the content down to avoid the hassle. However, recently we’ve seen a growing number of sites reject such requests, unless they’re accompanied by a valid court order. The latest is Medium, the increasingly popular content publishing platform.

In this case, the issue involves the government of Malaysia and the investigative journalism site Sarawak Report, which has been writing a bunch of stories, many based on apparently leaked documents, exposing corruption in Malaysia. Last summer, the website was blocked in Malaysiaafter a series of reports related to claims of $700 million magically appearing in the Malaysian Prime Minister’s personal bank account. After having its own website blocked, Sarawak also started republishing all its articles on Medium.

Apparently last week, Medium received an email from the Malaysian Communications and Multimedia Commission (MCMC) demanding that one of the Sarawak stories be removed: 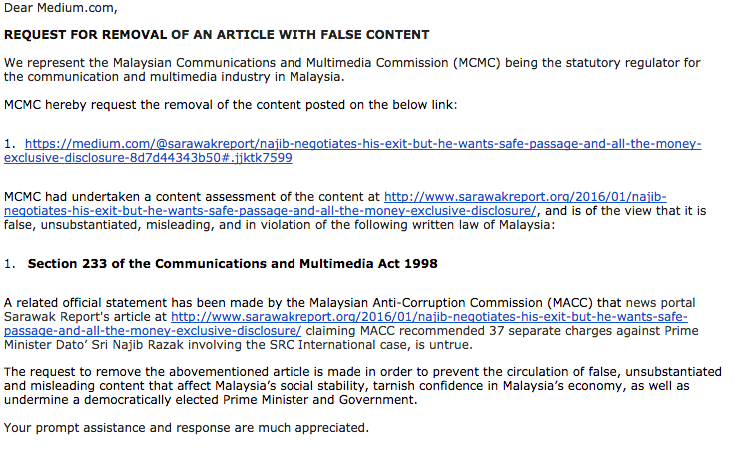 Of course, as you hopefully already know, one of the clearest signs of censorious thuggery is to claim that an article is “false” or defamatory in some way without ever getting into the specifics of what is false. Medium, quite rightly, responded to the MCMC by asking for more detailed evidence, showing (1) what specific statements are untrue and (2) any official judicial findings about the story. 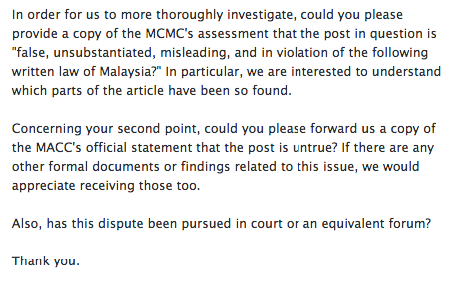 The company received no response — but late last week discovered that all of Medium is now blocked in Malaysia. If that’s meant to intimidate the company into taking down the article, it’s not working. Kudos to Medium for taking such a stand:

Medium’s in no position to evaluate the truth of the Sarawak Report’s Medium post. We’ve received no evidence that the post violates any of our Rules, or any law. We stand by investigative journalists who publish on Medium. Until we receive an order from a court of competent jurisdiction, the post stays up.