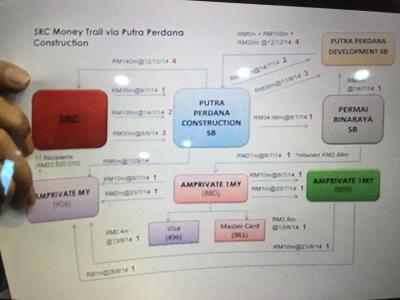 Paper waved by Apandi revealed a further previously unreported RM27 million traced by the MACC into Najib’s own account!

An extraordinary blunder by Najib’s loyalist Attorney General, Mohammed Apandi, caused him to release further evidence against the PM at the very press conference set up to announce he was dropping the case!

Sarawak Report has obtained exclusive close-ups of documents held up by Apandi at the event, which show that investigators had traced a further RM33 million on top of the RM42 million, which the PM has now admitted was siphoned from the KWAP public pension fund into his personal bank accounts.

It left observers wondering why the PM did not bring today’s explanations of innocence to cover all the money that has gone into his accounts and referred only to the sums which have already been exposed?

So much evidence, but no charges brought!

The bungling AG appears to have been attempting to show off how comprehensive the MACC investigation into the affair had been, by waving a sheaf of documents before the press.

It appears the elderly lawyer had not taken into account the modern zoom lenses in the hands of the surrounding journalists and unfortunately for him, the highly coloured charts and diagrams prepared by investigators could be seen clearly enough in the left hand document to reveal the complex trail by which further payments of RM27 million plus RM6 million were made to the Prime Minister – sums that haver never previously been mentioned.

He then funnelled these payments through two further accounts to fund two credit cards used on his summer holiday in 2014 and also to make payments to what are termed at ’17 recipients’, who received over RM23 million between them. 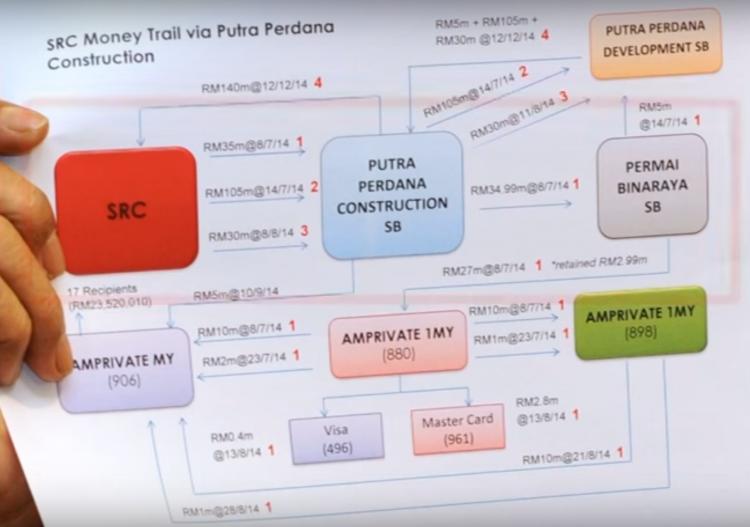 According to the MACC document waved at the press conference by Apandi the further RM27 million came into Najib’s account via the UBG linked company Putrajaya Perdana Berhad.

For clarity Sarawak Report has drawn up its own version of the chart based on our best possible identification of the figures, below: 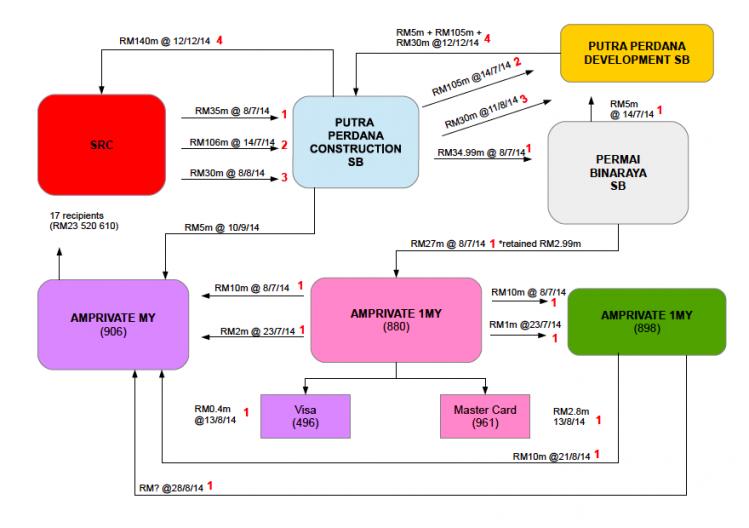 It can immediately be seen that the new money trail embroils yet another Jho Low related company, again run by some of Najib’s closest cronies in the 1MDB affair.  Putrajaya Perdana Berhad, of which the Chairman is none other than the head of Tabung Haji, Abdul Azeez Rahim, who has already been caught up in a raft of separate 1MDB related scandals.

The MACC document, while unclear in certain details, plainly shows how a total of RM33 million was shifted from SRC (which had received an original loan from the KWAP pension fund) between PPB and its subsidiaries, before being sent into Najib’s AmBank account numbers 2112022011880 and 2112022011906 in July and August 2014.

These transfers are entirely separate to the payments of RM42 million into the same accounts later in December and then the following February, which came through separate companies named Ihsan Perdana and Gandigan Mentari and have already been admitted to by Najib.

The chart also confirms separate reports published by Sarawak Report in August last year and followed up last week, detailing how this SRC money had been used to pay two credit cards used by the Prime Minister on his European holidays in 2014.

Sarawak Report had detailed the numbers of the two credit cards and the amounts spent:

And it can be seen that the MACC document waved by Apandi corroborates the very same card details and expenditures for those numbers in both cases.  Accusations from BN last week that Sarawak Report had “lied” on this matter can therefore be demonstrated to be unfounded by the very documents waved by Apandi at his own press conference.

Who were the 17 mystery ‘recipients’?

Another fascinating detail can be picked out from Apandi’s ill-advisedly waved chart.  It can be seen that sums totalling RM12 million flowed on from the PM’s account ending 880 into his other AmBank account ending 906 (which was also to receive some of the monies paid later from the RM42 million).

Much of this money travelled via a third account number ending 898 and it can be seen that a separate payment of RM6 million was also paid into the account directly from a separate subsidiary of PPB named Putrajaya Perdana Construction.

This 906 account is shown to have gone on to pay what are described in the chart as “17 recipients” who together received a total of RM23,520,610 million.  The identity of these 17 recipients ought surely to be publicised if Mr Apandi is wishing to prove a clean slate?

After all, murdered MACC prosecutor Kevin Morais, who had originally worked on the investigation had told Sarawak Report that the money had not merely been used for personal credit card spending but to cover various election related expenditures:

“Actually, the spending .. was rather mundane. Credit card bills, shopping, suppliers to the last elections that had not gotten paid because BNM had frozen the accounts of other proxy companies, that sort of stuff.” [email sent to Sarawak Report]

The over-riding question arising from this new information therefore is does Najib have the same excuse for how the money got into his account that he has just provided to explain the RM42 million that came in later?  Najib has stated that he had not known how the RM42 million reached his account or that it had come from SRC via Ihsan Perdana and Gandingan Mentari.  Instead, he had thought he had transferred it from the ‘donated’ US$681 million allegedly provided by a Saudi Royal.

Does he have the same excuse for this different sum of money which also came from SRC but through a completely different series of companies, before being shunted around three of his personal accounts in order to pay for this and that?

The new involvement of this sensitive public company, which has received a wealth of public contracts in recent years, opens a new dimension in the 1MDB/SRC scandal.

Followers of the scandal will know that PPB was one of the subsidiaries of the Taib company UGB, which the tycoon Jho Low bought into in 2008.  The papers released by Sarawak Report have proved what many suspected at the time, which was that money was later funnelled from 1MDB to buy out UGB profiting both Low and Taib Mahmud.

PPB, was allegedly purchased by PetroSaudi, but soon sold on again back to UGB and then to a new owner Cendana Destini. The current Chairman of the Board is none other than the Najib courtier Abdul Azeez Rahim, who is also the Chairman of the floundering pilgrimage fund Tabung Haji, which was caught bailing out 1MDB’s debts in a highly controversial land purchase deal last year. 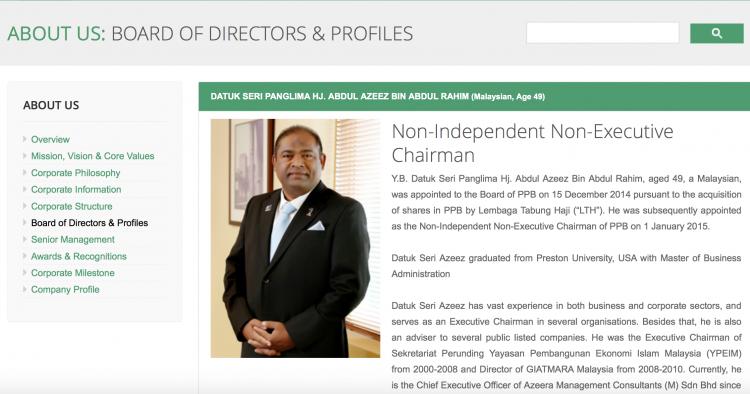 The same characters just keep popping up round Najib’s dodgy financial deals – Azeez is not recommended by his MBA from a degree for sale outfit named Preston University to sound like Princeton.

It is ironic that it was announced today that AG Apandi will join this very same Abdul Azeez Rahim on the Board of Tabung Haji, after Sarawak Report yesterday exposed that the Governor of the Bank of Malaysia had expressed deep concerns about the management and losses of the fund and called for more experienced management.

In Najib’s Malaysia this small band of foxes have clearly taken control of the chicken coup and they evidently plan to keep it that way.

See again our UPDATED clarified version of the MACC chart below: