Well after normal office hours on Friday the Swiss Attorney General’s Office detonated the diplomatic equivalent of a nuclear bomb under the attempts by Najib and his own Attorney General to bury the scandal around 1MDB.

Responding to the Malaysian AG Mohammed Apandi’s surprise announcement this week that Najib had been “cleared” of any wrongdoing by the Malaysian Anti-Corruption Commission investigation, the Swiss Attorney General Michael Laubersaid has issued a media statement of possibly unprecedented bluntness from the traditionally low-profile Swiss authorities.

The devastating one page document, delivered in the form of a public request for Malaysia to assist in Switzerland’s own criminal enquiries into 1MDB, has blown the whistle on the entire case and laid out in astonishing terms the key aspects of the Swiss investigation’s findings so far.

In doing so, the Swiss Attorney General has substantiated each of the major allegations published by Sarawak Report and other investigators into 1MDB over the past year, since the original details from the dossier of Swiss national Xavier Justo were first revealed by this news portal.

Detailed assault on Malaysia’s claims of innocence at 1MDB

Explaining his “request for mutual assistance” the Swiss AG has made several landmark revelations, confirming official concerns about corruption on an epic scale at 1MDB.

He has introduced a new figure of US$4 billion as the suspected amount that his officials believe has been criminally misappropriated from the fund. A sum, which, he points out, was “earmarked for investment in economic and social projects in Malaysia”.

In publishing this bold assertion the Swiss AG has shot out of the water months of twisting and turning by 1MDB and its new CEO Arul Kanda and his boss the Minister of Finance, as they have attempted to explain the billions missing from 1MDB.

The Swiss AG does not mince his words in pointing the finger at those he believes to be responsible for the shocking misappropriation or the crimes for which he believes they should be prosecuted.

He further reveals that “criminal proceedings opened on 14th August 2015 against two former officials of the Malaysian state-owned fund 1MDB (1Malaysia Development Berhad) and persons unknown” under a series of Swiss laws, a proceeding which had not previously been publicised.

Sarawak Report suggests that the individuals referred to by the Swiss AG under these categories are likely to include the Prime Minister of Malaysia, Jho Low, the former CEO of 1MDB, Shahrol Halmi and the former Abu Dhabi Aabar fund managers, Khadem al Qubaisi and his deputy Mohamed al Husseiny.

The above men have all been featured as key players in Sarawak Report’s exposes on 1MDB. The crimes outlined by the Swiss Attorney General, of which they are together or separately suspected are  “bribery of foreign public officials; misconduct in public office; money laundering and criminal mismanagement”

The unrelenting and direct accusations by an objective foreign regulator leave the Malaysian Prime Minister’s claims that the allegations against 1MDB have been an “unnecessary distraction” in tatters.

Swiss are investigating all aspects of the 1MDB scandal

The AG’s statement also makes clear that, far from limiting their investigations, the Swiss have extended their criminal enquiries into all the main aspects of the 1MDB financial scandal, as covered in recent Sarawak Report exposes.  He mentions four main areas of shady operations, but indicates there may be more:

“So far four cases involving allegations of criminal conduct and covering the period from 2009 to 2013 have come to light in this connection (relating to Petrosaudi, SRC, Genting/ Tanjong and ADMIC”

The fact that Swiss banks were dragged into almost every aspect of 1MDB’s activities by the main perpetrators must indeed now stand as a point of considerable regret by them.

The issues referred to by Laubersaid include the original PetroSaudi heist of a total of US$1.5 billion, as well as the series of massive bond deals conducted together with Aabar in 2012, supposedly to fund two power plant purchase deals by 1MDB.  Huge sums were recorded missing from the Aabar deals as well as from a subsequent ‘Strategic Partnership” with Aabar in 2013.

The final referrence to ADMIC shows that the Swiss are also looking into the money that was transferred by Jho Low from his Good Star company account in Zurich to his BSI Singapore account held under the name of ADMIC (Abu Dabhi Malaysia Investment Corporation).

Banks in the spotlight

Other players, who are now faced with worrying questions to deal with in these investigations, are the major banks which facilitated these deals. 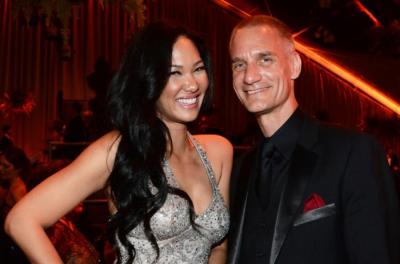 Also likely to be highly concerned is the American giant Goldman Sachs.  The main individual behind the 1MDB bond deals, their Singapore boss Tim Leissner was reported to have taken leave from the bank only last week.  Sarawak Report has reported for months on the eyebrow raising sums paid to the bank in return for unusual and enormous bond deals raised for 1MDB.

Malaysia is put on the spot

By going public in this brutal and highly unusual way, the Swiss have made plain they want no more nonsense from Najib or his henchmen like Apandi.

Laubersaid makes yet another revelation in his jaw-dropping press release, which is that the Malaysian AG had met with his officials in September and promised full cooperation.  That cooperation, he implies, is yet to be fulfilled on Apandi’s part:

“Cooperation between the two countries was already discussed at a meeting in Zurich on 15th September 2015 between the Swiss Attorney General and his Malaysian counterpart.  This request for mutual assistance now puts the agreement in principle that was reached into concrete terms”

It means, in short, that what Apandi has said to the Malaysian public is not what he was saying in private and that his claims of there being no evidence to pursue charges against 1MDB are nonsense in the eyes of his European counterpart.

This letter refers to a “systematic course of action by means of complex financial structures” by the alleged perpetrators of the crimes against 1MDB and Laubersaid makes clear his impatience with the fact that despite this looting of billions from Malaysia’s public companies “the Malaysian companies concerned have made no comment on the losses they are believed to have incurred”.

The Swiss authority ends on a conciliatory note, explaining that, given no Malaysian company has yet raised this issue of their massive losses, the Swiss are offering their assistance to “advise the companies and the Malaysian government of the results of the Swiss criminal proceedings with the aim of finding out whether losses on this scale have been sustained”.

Before the release of their media statement the AG and his officials also gave spoken comments to the Wall Street Journal.  Laubersaid had told the WSJ:

“We are very concerned. We have found evidence of suspicious money transfers linked to 1MDB going through Swiss financial institutions, and we believe that it is very important that it is shared with the Malaysian authorities.”

It was just hours later that he moved to action, making what may become a historic step in the fight to combat global money-laundering.

This weekend the beleaguered voices from the Malaysian Anti-Corruption Commission, the Bank of Malaysia and those others from the world of politics who have protested against a year of 1MDB cover-ups have found a powerful new ally from the international financial stage. 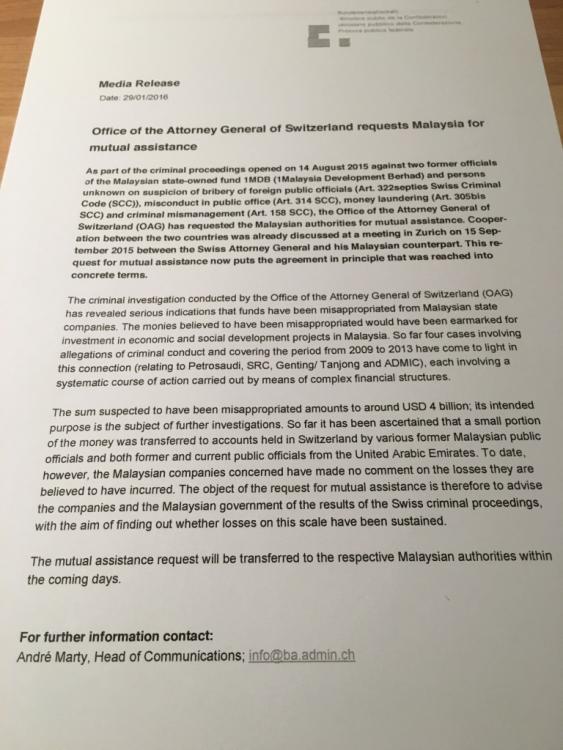 The statement in full

See the WSJ article below

ZURICH—Swiss authorities on Friday said they were concerned Malaysia had ended its investigation into the transfer of nearly $700 million into Prime Minister Najib Razak’s private bank account, saying the move could hinder their own probe where “strong evidence” has been found.

“We are very concerned,” Swiss Attorney General Michael Laubersaid in a statement Friday to The Wall Street Journal. “We have found evidence of suspicious money transfers linked to 1MDB going through Swiss financial institutions, and we believe that it is very important that it is shared with the Malaysian authorities.”

Earlier this week, the attorney general’s office in Malaysia announced that the $681 million transferred in 2013 to Mr. Najib’s account was a legal donation from Saudi Arabia’s royal family, and cleared the prime minister of any wrongdoing. The Malaysian Anti-Corruption Commission said subsequently it would seek a review of that decision.

The Swiss Office of the Attorney General, or OAG, has raised concerns over the handling of the case, saying it believes evidence it has gathered and is due to send to Malaysia won’t be considered by its counterparts there.

“There appears to have been a sizable fraud taking place here, and we believe [the case] should not be allowed to drop like this,” said OAG spokesman Andre Marty. “Without assistance from Malaysia our investigation in Switzerland risks running into a dead-end.”

Swiss authorities have been investigatingindividuals tied to Malaysia’s 1Malaysia Development Bhd., or 1MDB, a public investment fund established by Mr. Najib in 2009 to encourage economic development in the country. The future of the Swiss 1MDB probe, which has found evidence of suspicious transactions made through Swiss banks, is now uncertain.

The Swiss OAG said Friday it was disappointed with the decision of the Malaysian authorities, especially after an agreement between the two countries’ attorneys general last year to support each other’s investigations.

Mr. Lauber said that “strong evidence” had been collected so far, without elaborating. Investigating cases of suspected financial wrongdoing is central the integrity of Switzerland’s financial center, he said. “In this fight we need reliable foreign counterparts.”

Following the announcement from Malaysian authorities on Tuesday, the Swiss attorney general’s office contacted the Malaysians directly and asked for mutual assistance between the agencies to continue, and for evidence unearthed by the Swiss to be considered.

So far Swiss authorities haven’t received a response from the Malaysian Attorney General’s Office. The office didn’t respond to a request for comment.

In July, The Wall Street Journal reported that an earlier Malaysian probe found that the nearly $700 million had entered Mr. Najib’s account through banks including a Singapore branch of Zurich-based Falcon Private Bank AG, as well as other companies and entities linked to 1MDB. Three financial institutions in Switzerland have been linked to the transfers.

In August, the Swiss attorney general’s office opened a criminal probe of two unidentified 1MDB executives and what it termed “persons unknown,” for suspected money laundering and the possible corruption of foreign officials. The following month, Swiss authorities said Malaysia’s attorney general had agreed to provide assistance by arranging for the interview of key witnesses.

The Swiss have frozen tens of millions of dollars in assets at unspecified Swiss banks as part of their probe. The Journal has reported that the investigation has focused on transactions made using Falcon, which is owned by an Abu Dhabi sovereign-wealth fund that has done business with 1MDB. Falcon hasn’t been accused of wrongdoing.

As part of its announcement earlier this week, the Malaysian attorney general’s office said evidence doesn’t show that the Saudi donation to Mr. Najib “was given as an inducement or reward for doing or forbearing to do anything in relation to his capacity as a prime minister.” All but $61 million of the money was eventually returned to the Saudis, Malaysian authorities said.

However, a Saudi government official said the Saudi ministries of foreign affairs and finance had no information about such a donation being made.

Meanwhile, the Swiss expect to make requests for information regarding their own investigation in the next few days.